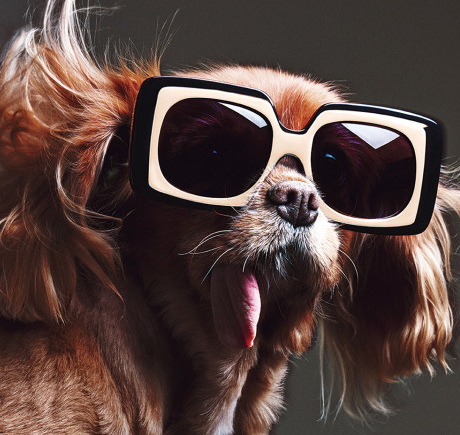 “TOAST OF THE STAR”

New Zealand-based eyewear brand Karen Walker tapped Instagram sensationToast the Dog to star in its spring 2015 ad campaign. The pup — who was rescued by comedian Josh Ostrovsky and his wife, Katie Sturino — is featured wearing sunglasses next to designer Karen Walker in the ads. The campaign images were revealed,exactly a year to the day after the Cavalier King Charles spaniel made her Instagram debut. The images are set to appear in the Karen Walker storefront, on its website and on social media platforms. They will also be featured on the sites of many retailers that carry Walker’s line — which spans across 35 countries — called Sunshades Eyewear, which produces the designer’s product, told WWD. “Hers is a true Cinderella story — she was rescued from a puppy mill and was in terrible condition. Katie and Josh brought her back to health and rocketed her to fame,” Walker said. Walker told WWD that she met Toast after noticing that she wore several pairs of her glasses in her daily social media posts. Hairstylist Gavin Harwin used fans to get Toast’s ears to move in the wind for her advertising debut. “It’s pretty hard to compete with a toothless dog with its tongue hanging out,” Walker told WWD about being featured next to the internet starlet. Toast’s teeth had to be removed after Ostrovsky and Sturino rescued her from a Brooklyn mill in 2011, which causes her tongue to constantly wag. Walker also made a donation to Friends of Finn, the Amanda Hearst-founded and Humane Society-supported committee that helps stop inhumane breeding practices in puppy mills.