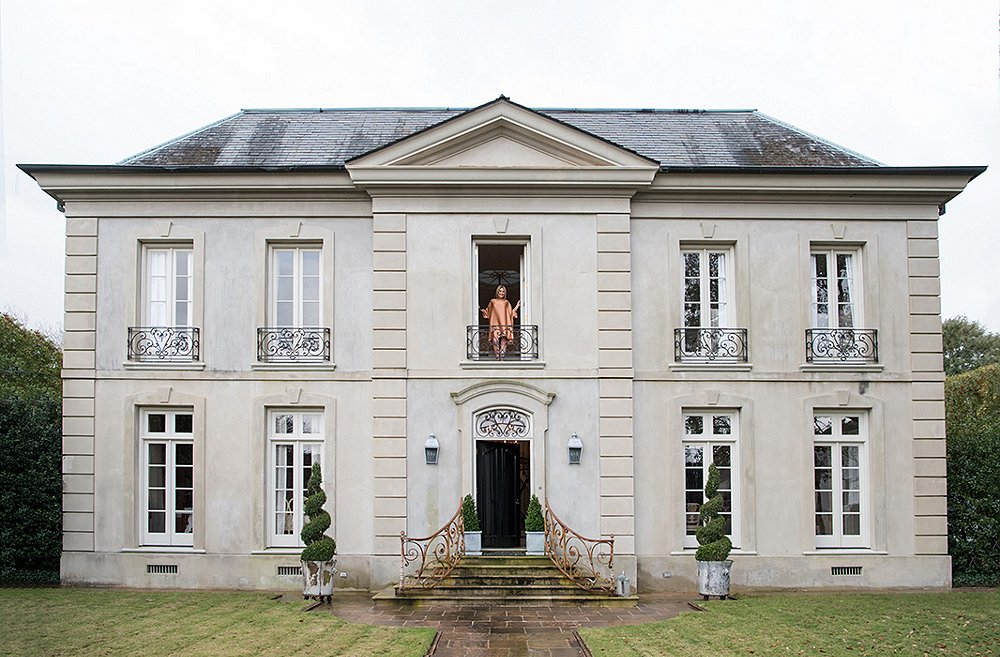 Inside Tara Shaw’s Breathtaking—and Very European—New Orleans Home
Tara Shaw has stayed true to her native Louisiana, long ago becoming one of New Orleans’s leading lights in design, but she just can’t stay away from Europe. During the past 25 years she’s taken countless Continental jaunts in search of treasures for her antiques and interior design businesses and to inspire her line of reproduction furnishings. It’s in tucked-away shops in France, Italy, and Sweden that she trained her eye. “That’s the ultimate treasure hunt,” she says. “It’s guerrilla antiquing. Now I can spot a bad finish at 100 paces in the dark.” 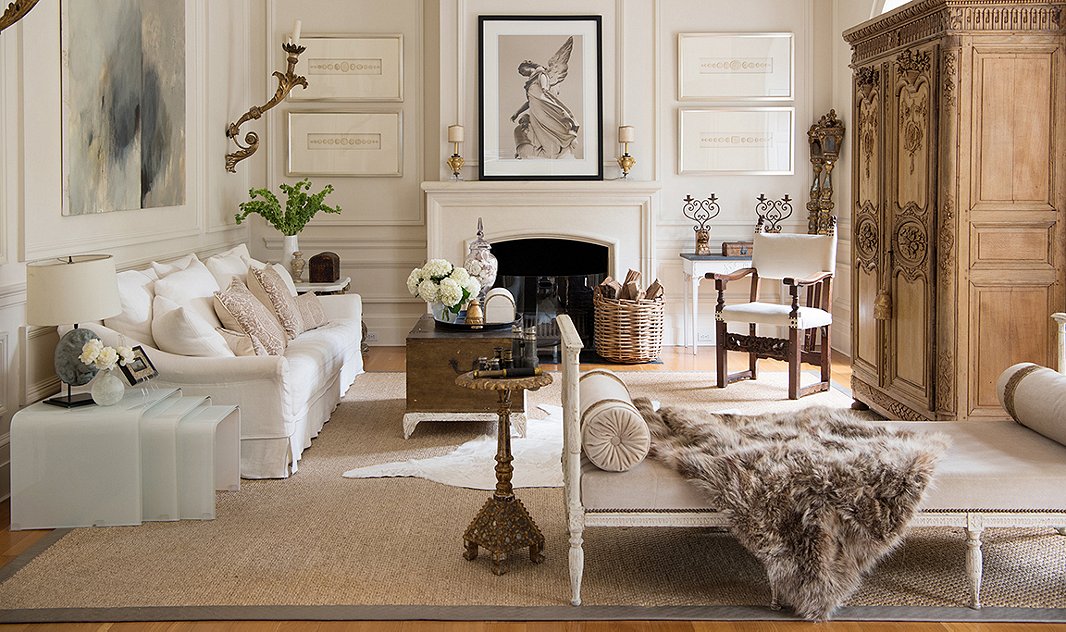 In the living room, Tara has kept a high degree of comfort without losing an inch of style. She tucked a “massive TV and all our stereo equipment” inside an armoire. “I love the way the daybed keeps the room from feeling closed off. And it’s so cozy, my husband often falls asleep there!”

You might even say that Tara has found a way to live in Europe in the middle of New Orleans’s Uptown District. In 2004 she found a house in an unusual style for the Southern city—it has a Haussmann look, with a severe facade and hand-lathed stucco. It was, in fact, designed by architect Barry Fox and modeled after a house the original owner had spotted in France. Tara bought it the moment it came on the market, and now she considers her pocket of the city near Audubon Park to be her own “little European village. I can walk anywhere I need to, and I see everyone I know at Langenstein’s [her local grocery shop] at 5 o’clock.” 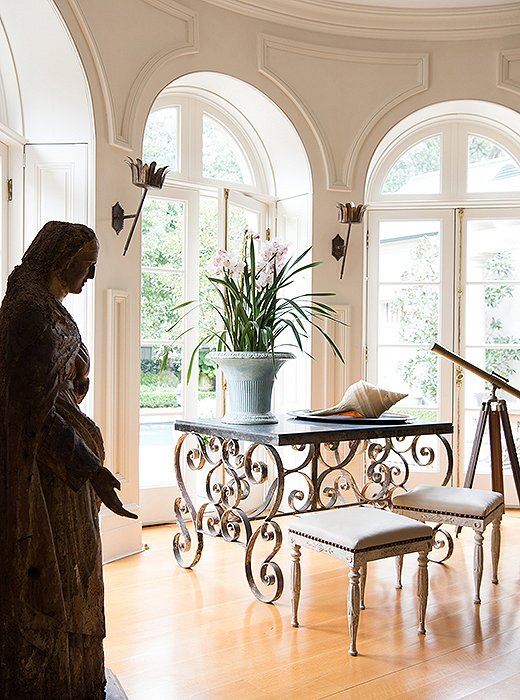 Tara stood a statue from Avignon (“probably 16th century—it’s worm-eaten and petrified in the back,” she says) by the living room windows, which look out on a saltwater pool. Eighty trees line the property’s perimeter, giving it a sense of privacy.
Inside the house, Tara has set a tone that’s equal parts grand and easy. By using a palette that’s become the byword of modern chic—a well-layered assortment of neutral tones—she’s made her collection of sumptuous, classical furnishings feel as unintimidating and current as can be. This palette has another purpose besides modernizing historic pieces: relaxation. “I wanted serene colors,” she explains. “After juggling so many balls all day, I don’t want to be stimulated when I walk in the door.”
Take in this breathtaking New Orleans home, where Tara lives with her husband and their beloved whippet, and pick up the designer’s well-honed tips on how to live with antiques. 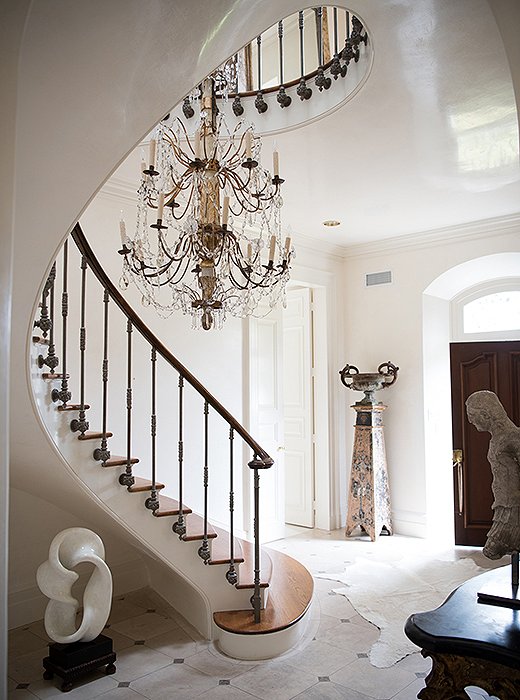 Tara wanted to balance the house’s austere facade with a comfortable, light feeling inside. For the foyer, she chose Venetian plaster for the walls. It’s glossy, textured, and easily repairable—important for such a high-traffic space. 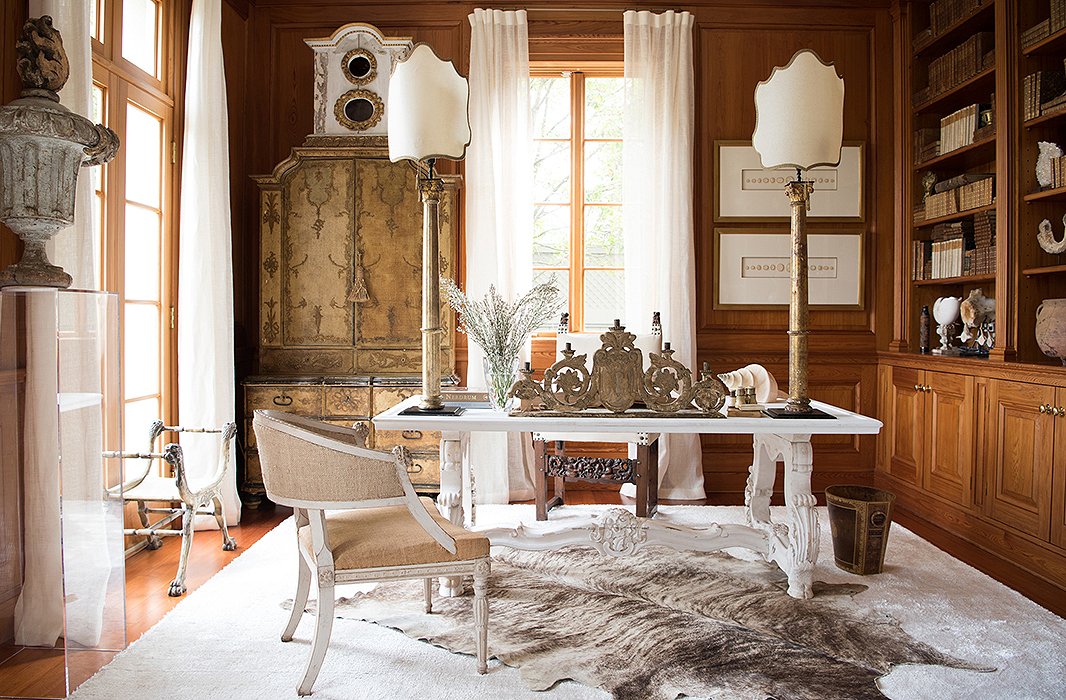 With Italian Corinthian fragments (made into desk lamps) and a reliquary standing atop a secretary, Tara’s office hits a high note of European grandeur—as she puts it, “When you walk into the room, you see this beautiful Old World visual.” She saves it from feeling heavy by sprinkling in neutrals. Opposite this Old World visual are the 21st-century technologies that make the office tick. 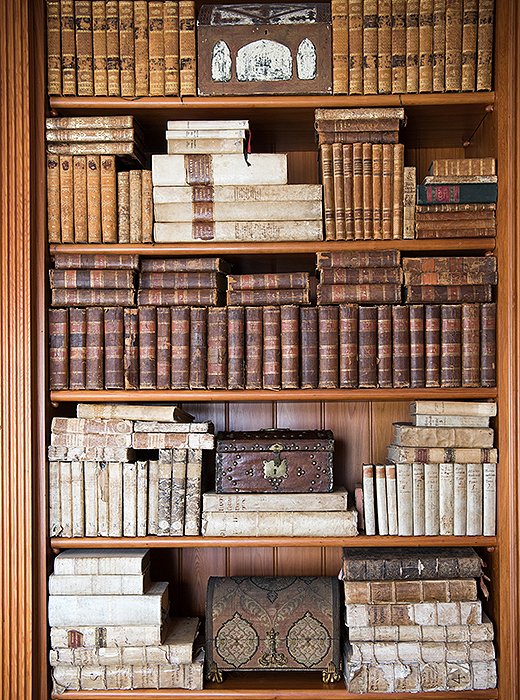 Tara’s collection of antique books, found in Sweden, France, and Italy, reflect her taste for infusing interiors with a sense of history. Yet, she says, “there’s no formula when it comes to my clients’ homes. I just designed a two-story glass boathouse for a client, all contemporary, that looks nothing like this!” 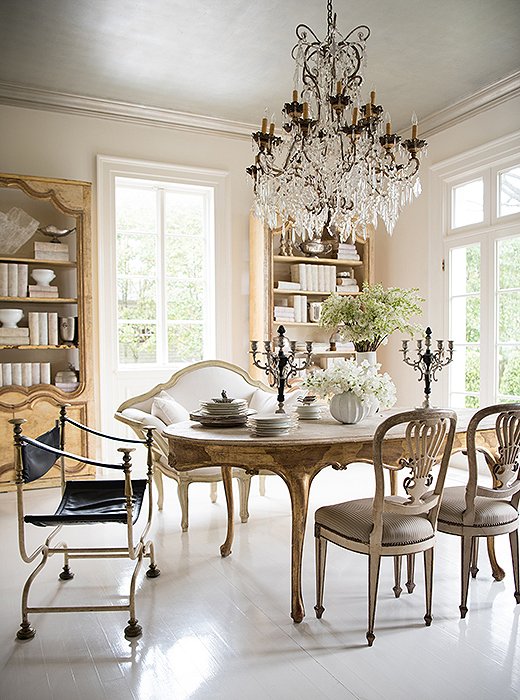 Tara found a boiserie (sculptured paneling) in a house near Versailles and repurposed it as a bookcase in her dining room. The bench and the candelabras (based on a pair Tara found in Lyon) come from Tara Shaw Maison. A midcentury chair ensures the room “doesn’t feel dated.” 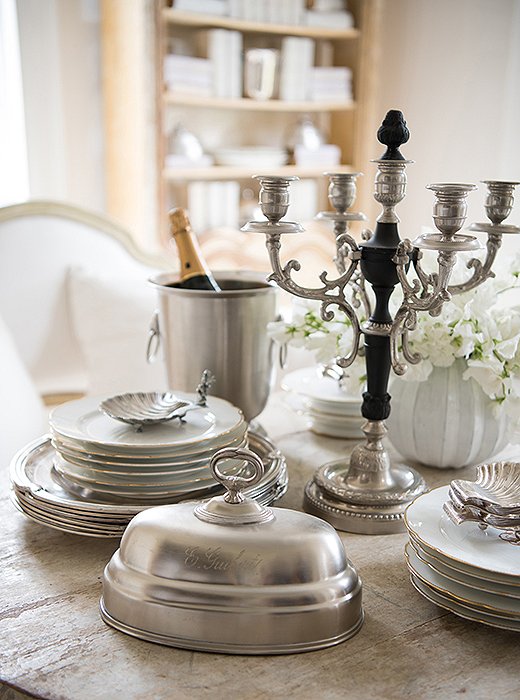 Tara relies on her collection of French antique plates for dinner parties. Bucking the current trend of eat-in kitchens, “we really do formal meals in our dining room,” Tara says, complete with place cards and multiple courses. When the meal’s finished, “we clear the table and play card games.” 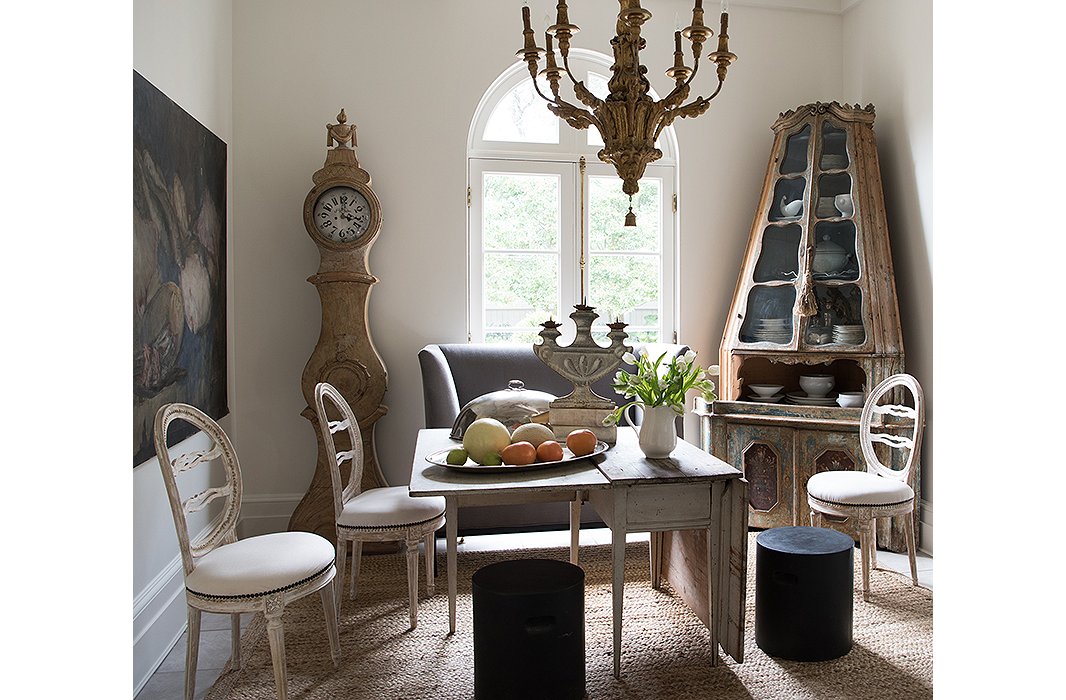 An 18th-century Venetian corner cabinet, a 19th-century Belgian still life, and a Swedish drop-leaf table make the breakfast room feel as if it’s been lifted out of an earlier century—yet Tara has balanced the pieces with dining room chairs and a gray banquette from Tara Shaw Maison. 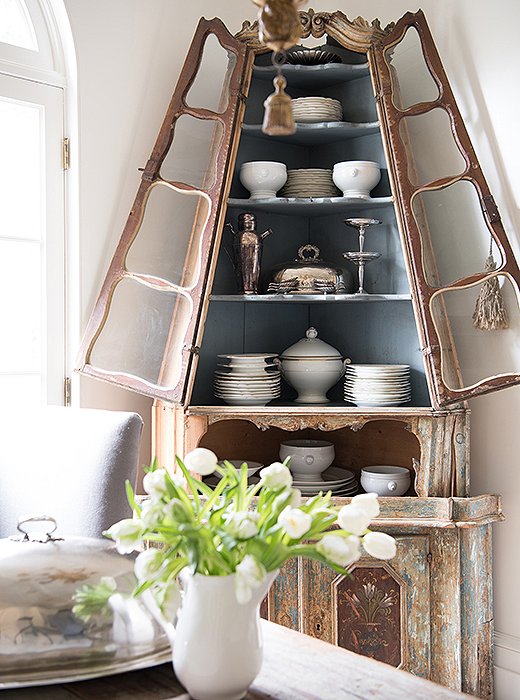 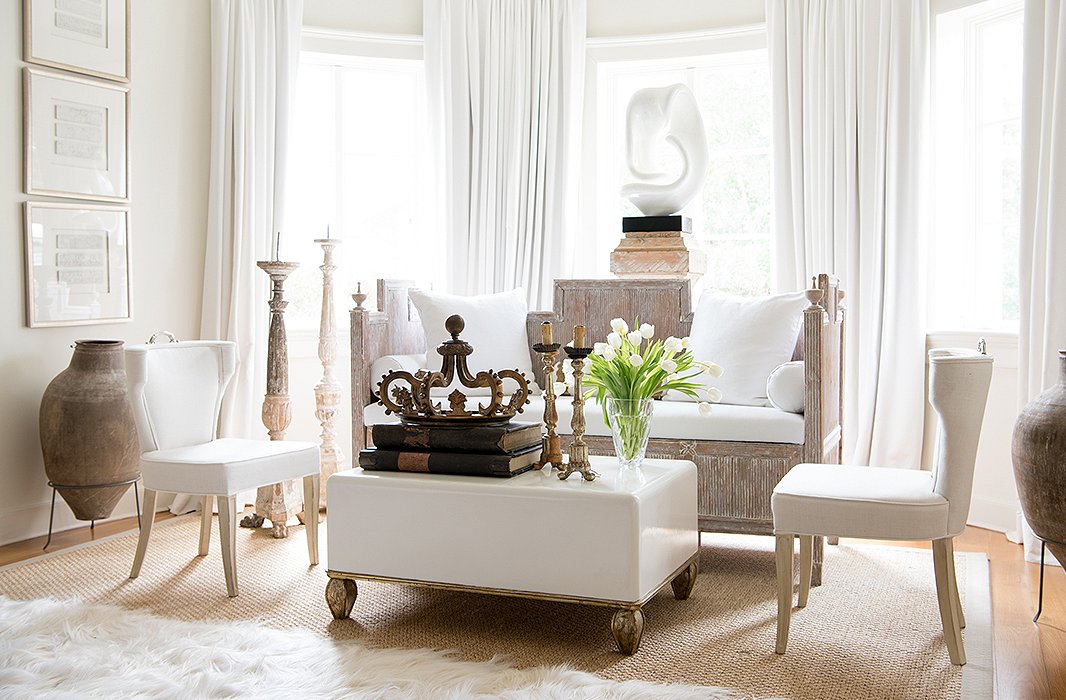 “When I painted this room, I’d fallen in love with Benjamin Moore’s Linen White, and I loved how that looked with the white resin sculpture,” Tara says of the master bedroom’s sitting area. Tara layered more white from there: drapes, a 22-ounce linen on the banquette, more Linen White in a high gloss on the coffee table. 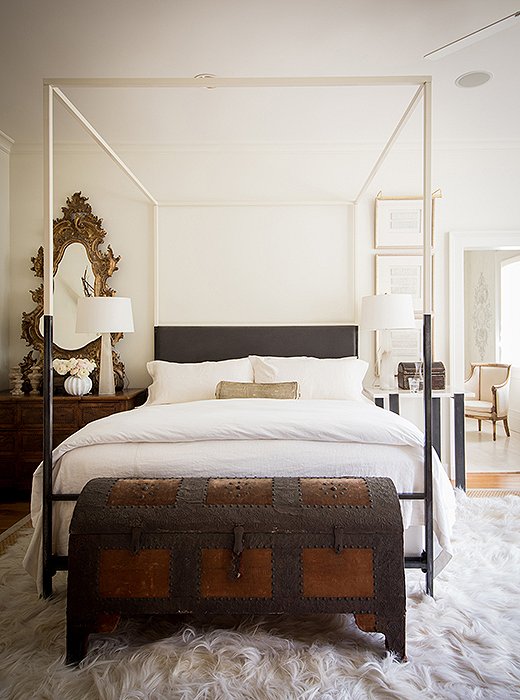 The trunk at the foot of the master bed is another treasure from Italy: Covered in velvet and nail heads, with its original toile, it provides lots of storage. “I can open that trunk and there goes everything I want to hide.” The cozy long-haired rug is balanced by the high-gloss car lacquer of the bed frame. 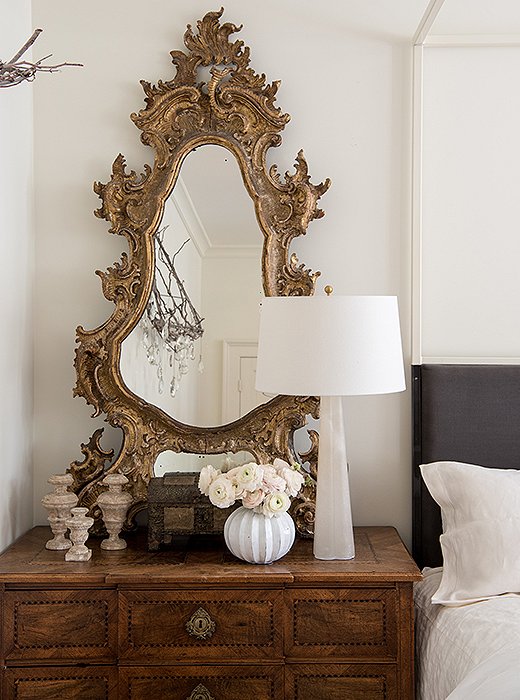 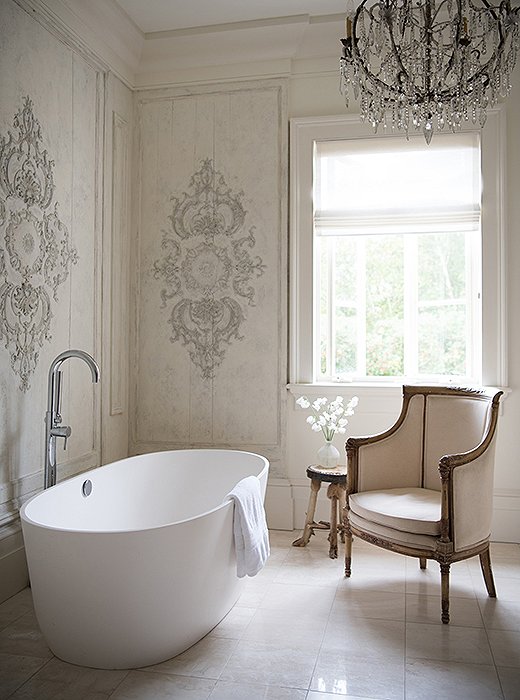 Tara describes herself as a “tub girl”—she takes a bath nightly “with Epsom salts and lots of potions and notions.” The furnishings of this little retreat distill her grand but accessible style: a contemporary tub, a chandelier, and a bergère (from her own line). For the walls, she installed three pieces of paneling she’d found in the South of France: “There wasn’t quite enough of it, so we built it out with pine and did a finish on top, so you can’t tell the old from the new.” 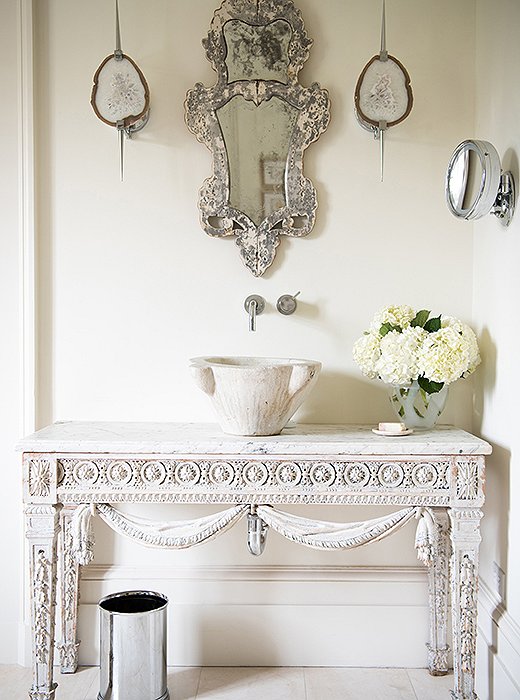 Tara created a bathroom sink to her taste by converting an Italian mortar to a sink and installing it in a white vanity table. A Venetian mirror hangs above it. 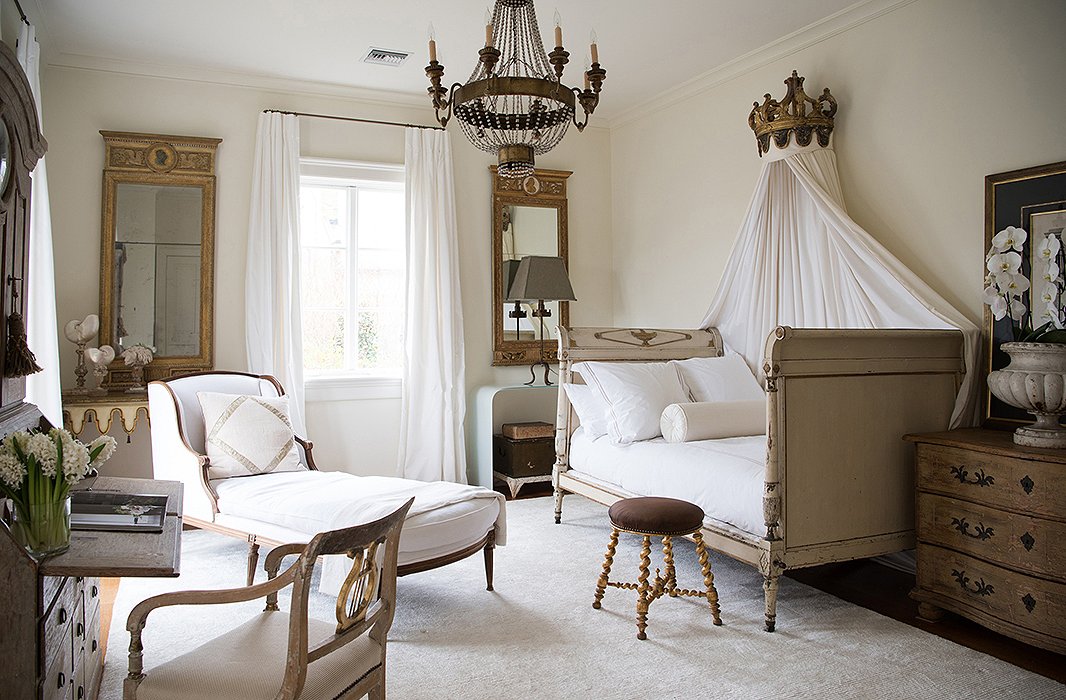 The guest room seems redolent of a French château, yet if you look closely, Tara has balanced the haute French design—the Directoire bed, the 19th-century chaise—with refreshing contemporary pieces like an opaque glass console. 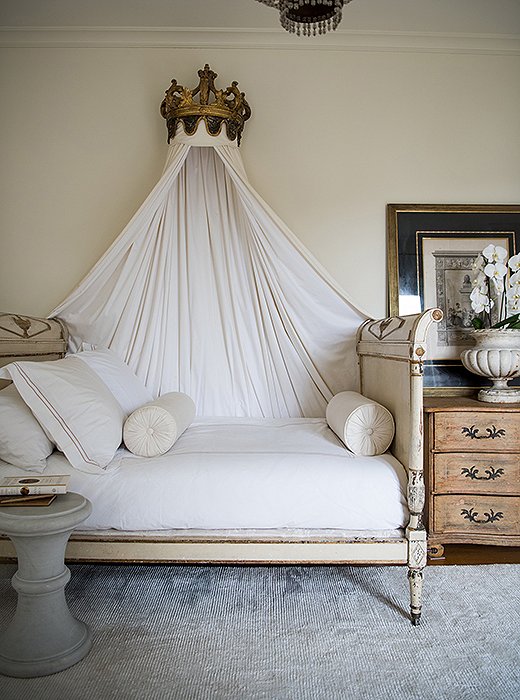 Tara puts antique beds in just about every room—this Directoire piece, she says, is “so enveloping, so sheltering, and so much fun to crawl into at the end of the day.” 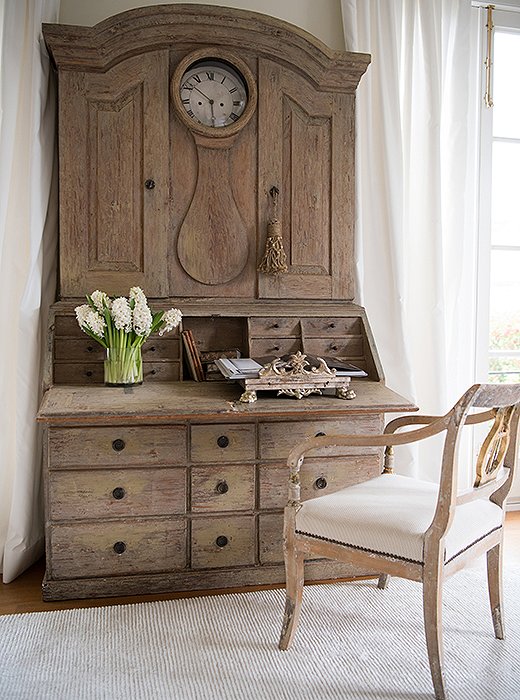 Tara keeps her stationery inside this 18th-century Swedish secretary. She likes to write her notes in the guest room—and loves that, once she closes up the desk, everything’s hidden: “I’m big on storage and love anything with a drawer. It means you can tidy up quickly.”