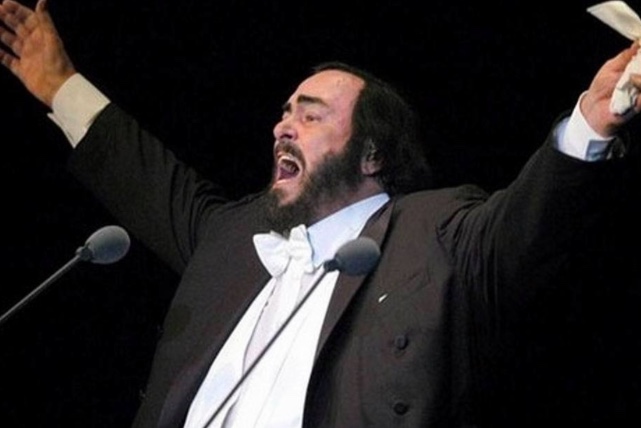 One of my favorites, enjoy.

Nessun dorma
via:wikipedia
“Vincerò” and “Vincero” redirect here. For the album by Amaury Vassili, see Vincerò (Amaury Vassili album). For other uses, see Vincerò (disambiguation).
“Nessun dorma” (Italian: [nesˈsun ˈdɔrma]; English: “None shall sleep”)is an aria from the final act of Giacomo Puccini’s frequently performed opera Turandot and is one of the best-known tenor arias in all opera. It is sung by Calaf, il principe ignoto (the unknown prince), who falls in love at first sight with the beautiful but cold Princess Turandot. However, any man who wishes to wed Turandot must first answer her three riddles; if he fails, he will be beheaded. In the aria, Calaf expresses his triumphant assurance that he will win the princess.
Although “Nessun dorma” has long been a staple of operatic recitals, Luciano Pavarotti popularized the piece beyond the opera world in the 1990s. Both Pavarotti and Plácido Domingo released singles of the aria that charted in the United Kingdom, and it appeared on the best selling classical album of all time, The Three Tenors in Concert. Since that time, many crossover artists have performed and recorded it. It has also frequently appeared in movies and on television. Unusually for a classical piece, it has become a part of popular culture.
In the act before this aria, Calaf has correctly answered the three riddles put to all of Princess Turandot’s prospective suitors. Nonetheless, she recoils at the thought of marriage to him. Calaf offers her another chance by challenging her to guess his name by dawn. (As he kneels before her, the Nessun dorma theme makes a first appearance, to his words, “Il mio nome non sai!”) If she does so, she can execute him; but if she does not, she must marry him. The cruel and emotionally cold princess then decrees that none of her subjects shall sleep that night until his name is discovered. If they fail, all will be killed.
As the final act opens, it is now night. Calaf is alone in the moonlit palace gardens. In the distance, he hears Turandot’s heralds proclaiming her command. His aria begins with an echo of their cry and a reflection on Princess Turandot: 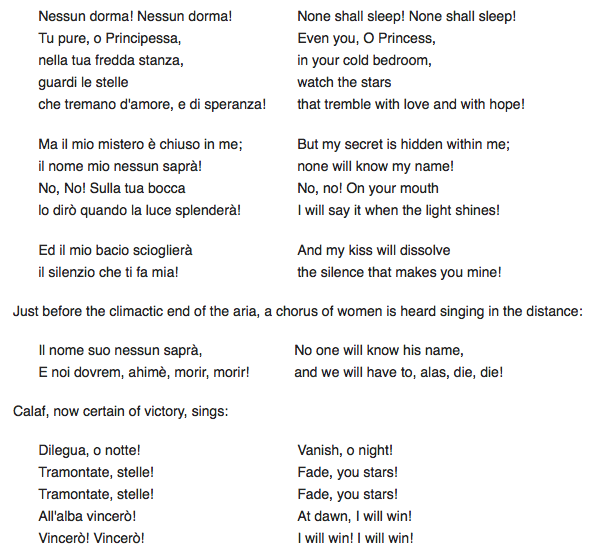