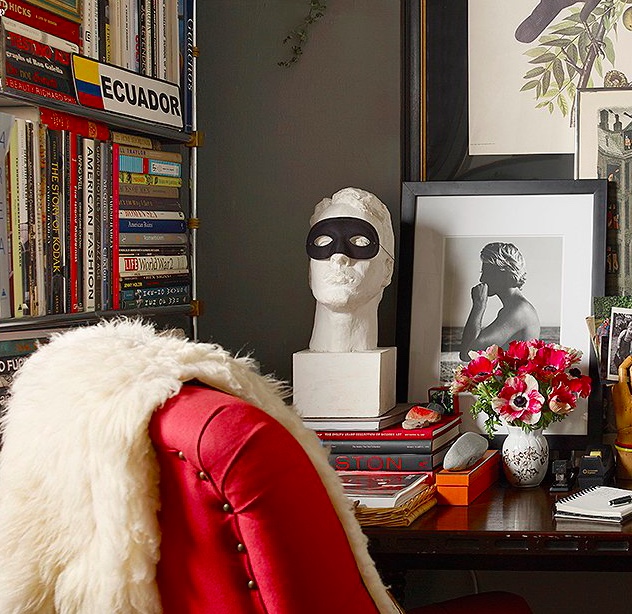 Inside a Fashion Designer’s Collected Bastion of Beauty 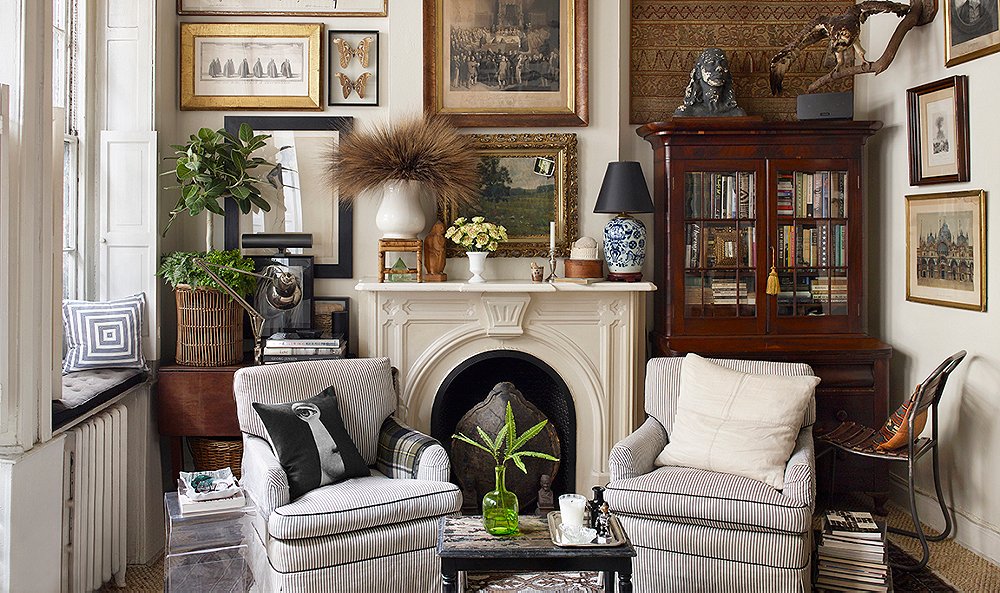 Michael first toured the 650-square-foot West Village walk-up in 1995 and leased it on the spot. “They’re going to have to carry me out of here,” he says—and one can easily understand why.
Centrally located in the same neighborhood as the homes of Julianne Moore and Sarah Jessica Parker, it is one of those rare rent-controlled gems so well suited to its inhabitants that it’s difficult to imagine anyone else living there.
Most everything in the apartment was chosen by Michael (Mike moved in when the couple married last June), but given that their tastes are so similar, it’s safe to say that the overriding aesthetic is reflective of them both. 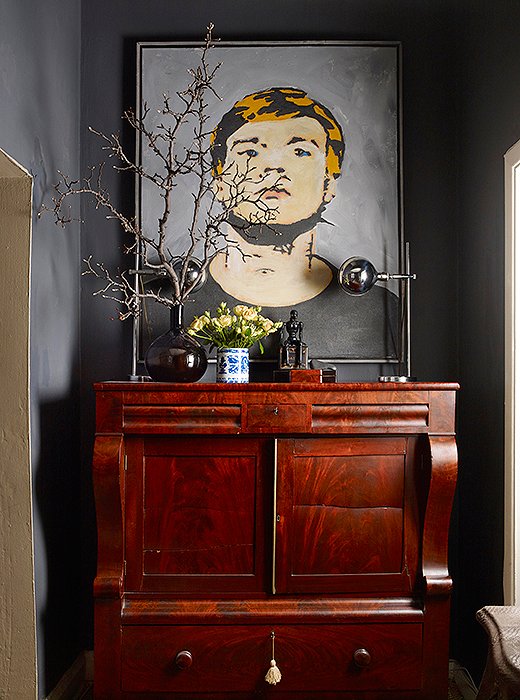 In the entry, a Warhol reproduction found on the corner of Fifth Avenue and 11th Street hangs against a wall painted Benjamin Moore’s French Beret.
Below, a vintage American Empire cabinet hosts a pair of polished-nickel task lamps.
It is a gentlemanly sort of place, considered and comfortable. Art hung salon style; rich charcoal walls; antiques juxtaposed with treasures from the street:
These elements come together to form a visual mix on par with the runway collections for which Michael is known.
The fall-winter 2012 collection, he says, is a good comparison: Inspired by men of a bygone era (“who all the hostesses in New York kept close at hand”—think Bill Blass, Kenneth Jay Lane, and Albert Hadley), it reads as an amalgam of all things luxe and laid-back… just as Michael’s home does. 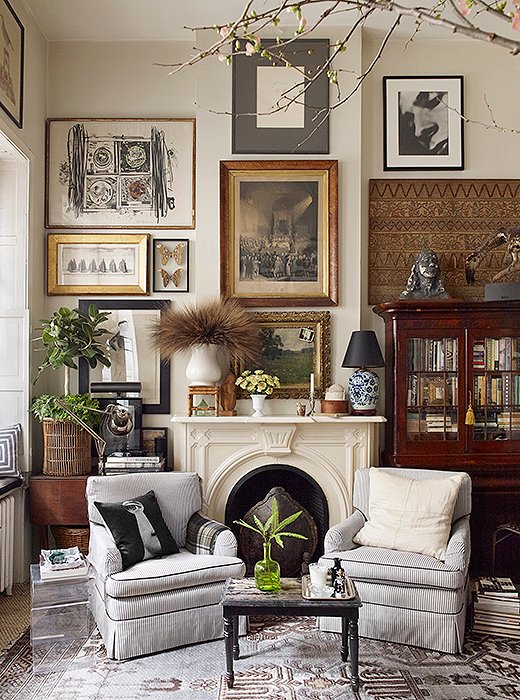 Aged to perfection: Ten or so years ago, Michael painted the living room walls in a mixture of two shades of white, which have since turned a color just shy of ecru.
The club chairs flanking the fireplace were a gift from a friend in the 1990s; he periodically reupholsters them in the same black-and-white ticking. 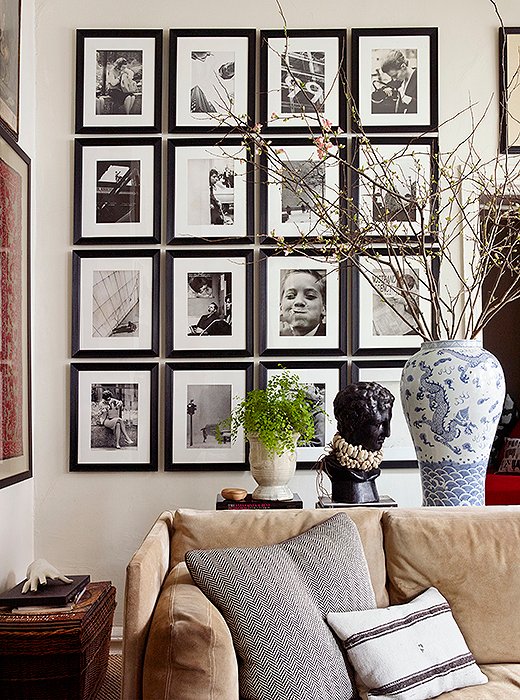 Behind the suede sofa hang 16 photographs found unframed at a local flea market. “It was one of those Sundays when you’re at the market with your friends and all anyone wants to do is go to brunch, and there I was sifting through piles of old photos,” Michael recalls.
Though the prints were a deal at two bucks apiece, a trip to the framer increased costs tenfold—but the final result was “well worth the expense.”
Michael’s personal sense of style leans more eclectic than traditional. He describes the home as “a little of everything that’s been smashed together in slow motion over the past 20 years.”
And though there’s something democratic about the mix as a whole, he draws the line at the mention of American style. 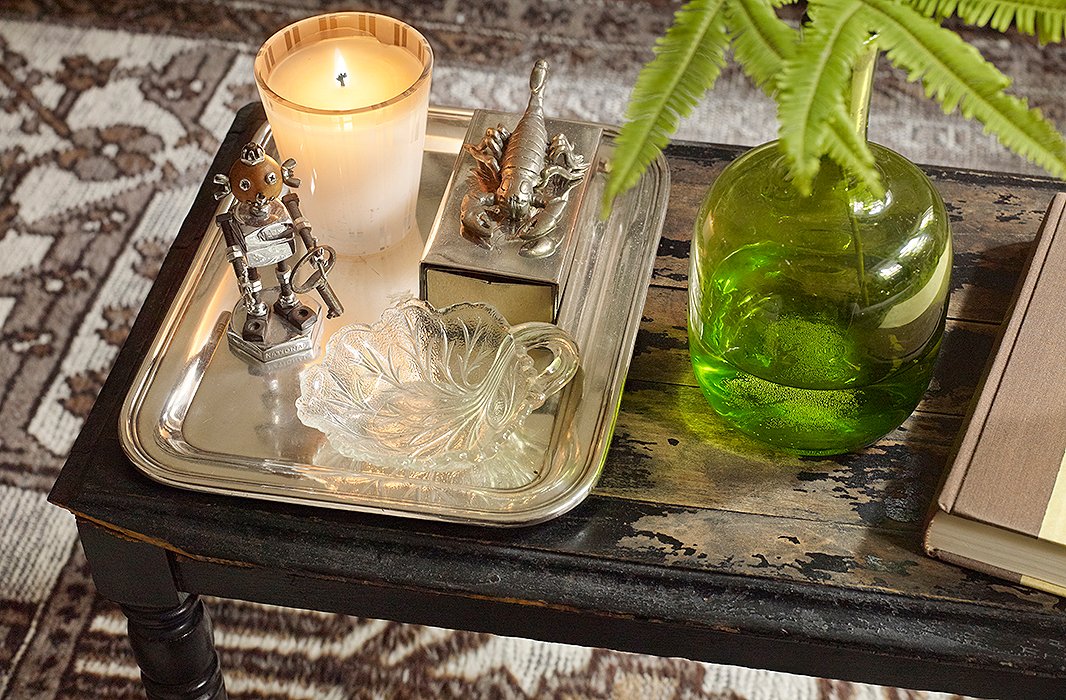 Like Michael’s collections, his apartment features delightfully quirky touches juxtaposed with things plainly practical. I
n the living room, a piano bench (another gift from the street) steps in as an ideal-size coffee table for the small space.
The steampunk-style robot caught Michael’s eye at a thrift store. 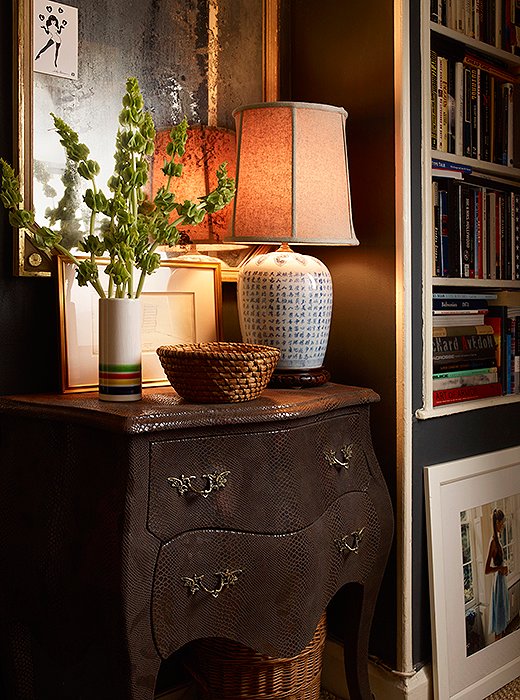 A bombé chest finished in faux lizard serves as a snazzy foundation to an otherwise traditional vignette.
Details such as a nubby Empire lampshade and a woven basket turned catchall epitomize Michael’s penchant for rusticity.
“When people talk about American-style [clothing], they think it’s either preppy or it’s street, with nothing in between,” he notes.
“It’s kind of the same with interiors—it’s either classic or it’s modern. But I don’t think any of it really falls into one clean category.” 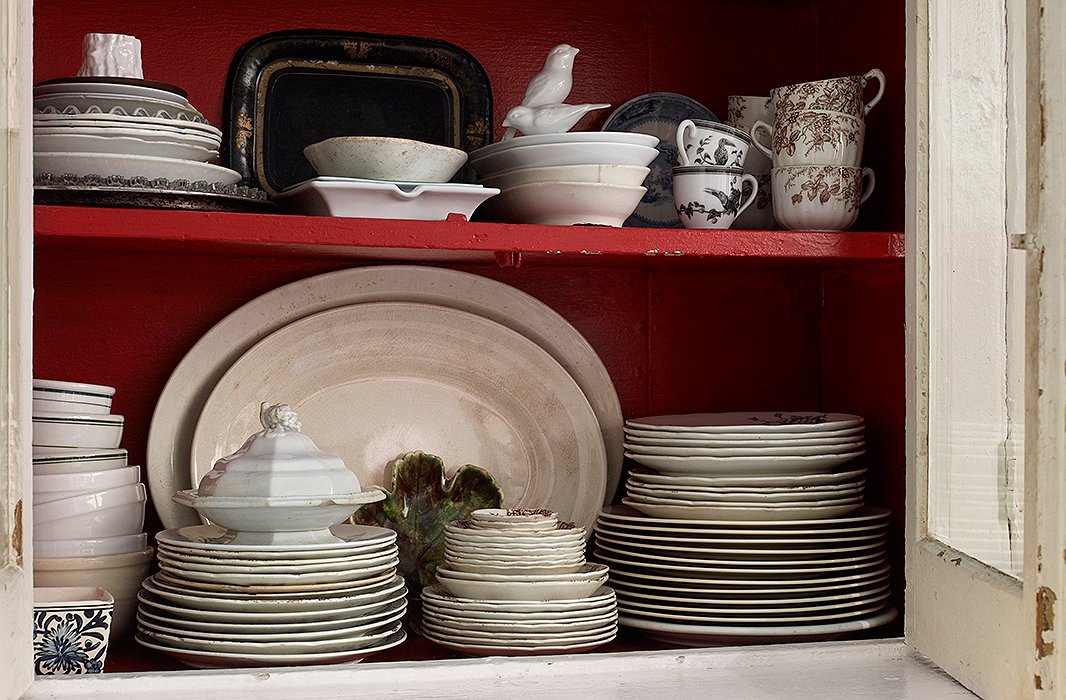 Original to the apartment, a delightfully dilapidated kitchen cabinet—which Michael customized with a coat of Glidden’s Candy Apple—displays vintage dishes, cups, and serveware too beautiful to hide.
Michael attributes his eye for arrangement to past work experience. Before starting his own label, the designer did stints at Sotheby’s, Tiffany’s, Bergdorf’s, and then Ralph Lauren, where he learned the cardinal rule of magpie style: “It should never be just one type of thing.”
With a gallery wall, for example, “it should never just be painting or just photography, but a mix—that’s where the real magic is. There should be modern stuff, textiles, framed book covers all hanging together,” he says. “Just one big ol’ mix.”
This philosophy extends well beyond Michael’s own salon-style walls.
Vintage rugs layered over natural sea grass, kitchen cabinets filled with mismatched plates, a bust donning puka shells and another in a masquerade mask: touches of magic styled to life. 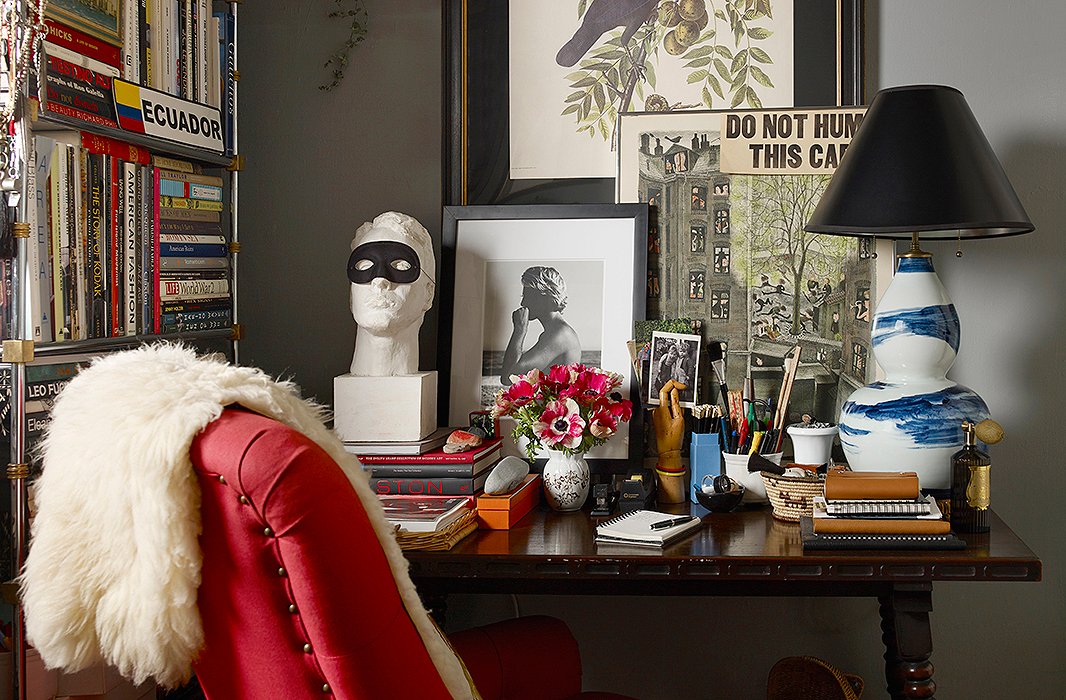 Michael’s “home office” centers on a spindle-leg table flanked by a masked bust and a Bunny Williams Home lamp. The black-and-white photograph of a lifeguard, a work by photographer Matt Albiani, leans against a wall painted in Glidden’s Ascot Blue.

“What’s more, this collection of things two decades in the making was built within the walls of a rental. It would be difficult for most to justify outfitting a technically temporary space to such a degree, but for Michael, these efforts make his rental feel like home. “I’m not able to make huge structural changes,” he says, so he’s figured out how to cope with the apartment’s unfixable flaws through fun with decoration.

“You put up with it, you work around it, you preserve it, and then weirdly enough, you end up falling in love with it,” he explains. “It’s like loving someone not despite their flaws but because of them.” 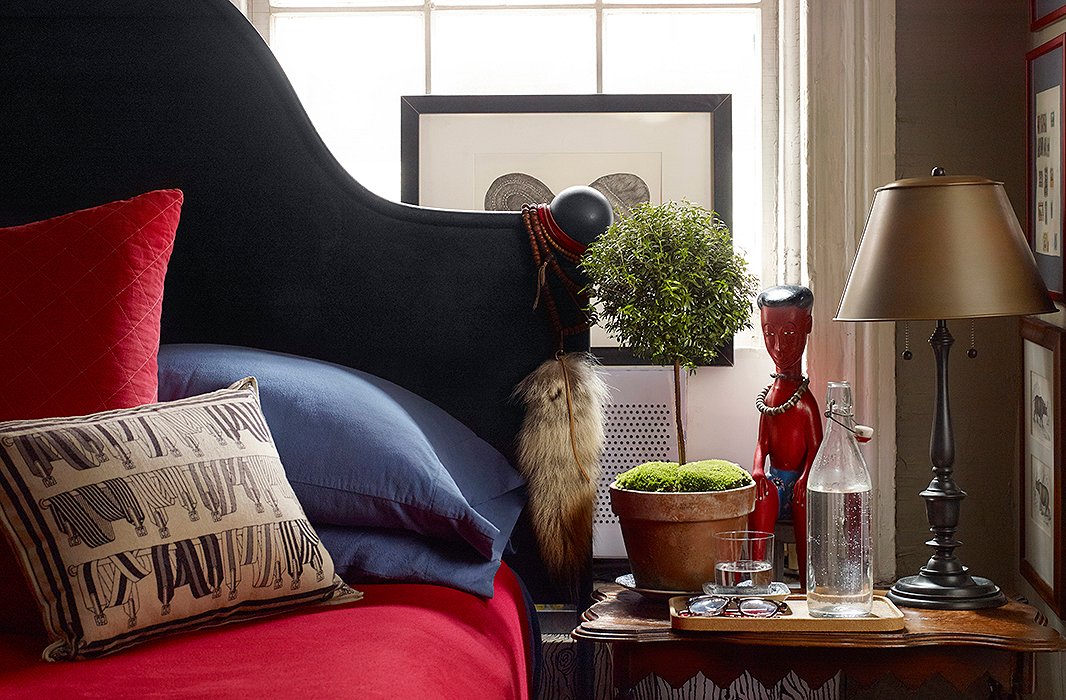 In the bedroom, an iron bed from Ralph Lauren Home is made with sheets that match the hue of the kitchen shelves. At bedside, an African statue stands guard just behind a cork tray holding spectacles, a glass (half full), and a small topiary. 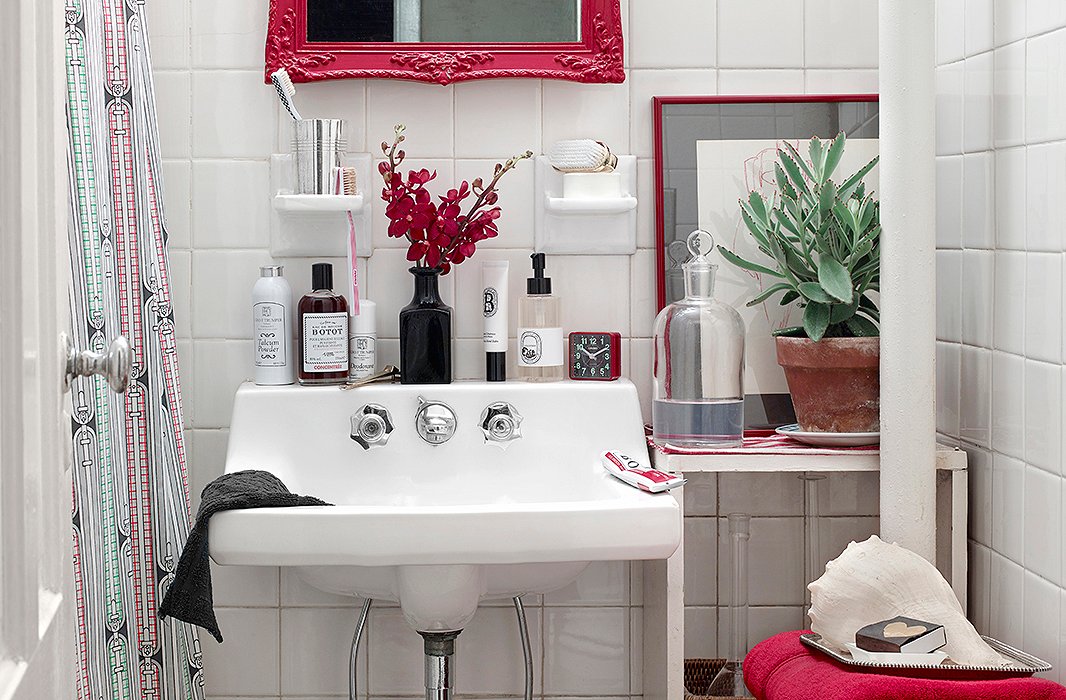 Vanity lessons: Simple touches like a fancier bottle of Botot mouthwash (the brand was a favorite of Louis XV) and a brush in a silver cup are easy ways to elevate the look of any bath.

Loving, it appears, is the operative word. Michael admits to being very much stuck in his ways by the time Mike moved in. After so many years, everything seems to have found its rightful place. The look is complete, so to speak, and isn’t likely to fall apart. Fine, but how do Michael and Mike lovingly cohabitate in a space that was furnished by one and not the other? “Through an agreement,” says Michael. “If he doesn’t like something and he can come up with a better solution than the one I’ve spent 20 years trying to figure out, I’m open.” Luckily, even after the so-called honeymoon period, Mike has yet to find something he doesn’t like. 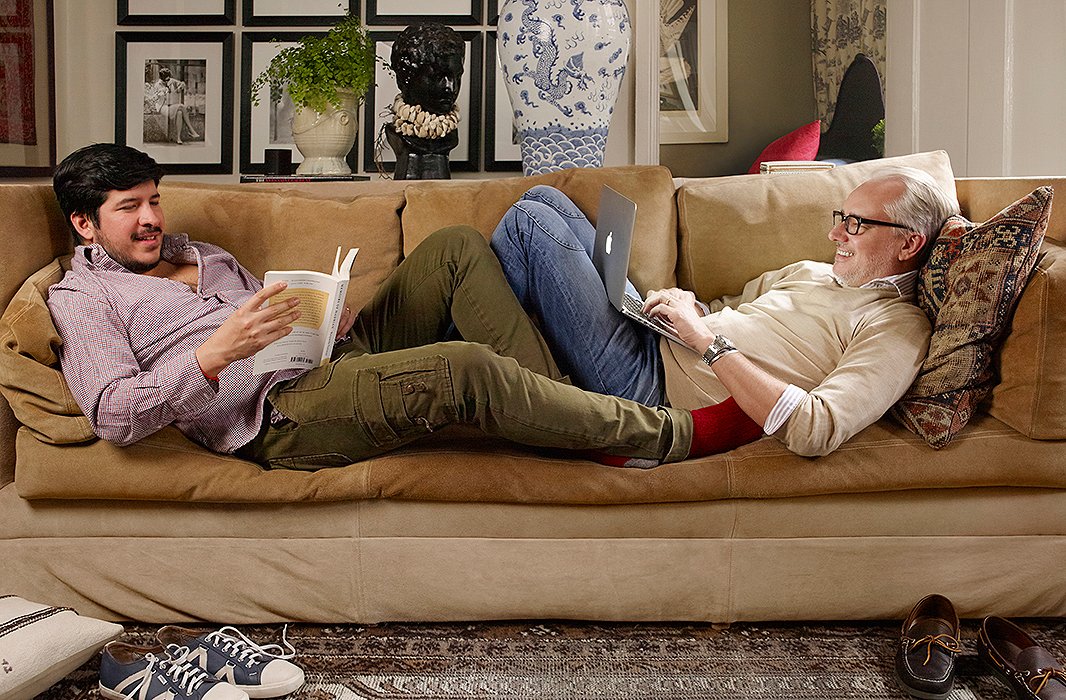 Mike Vasquez (left) and Michael Bastian at home.
via: One Kings Lane