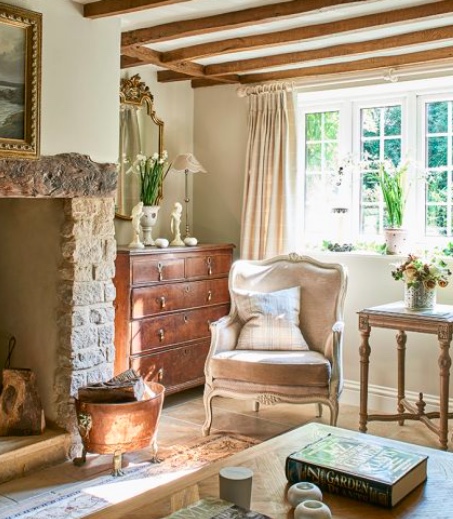 When the owners of this Wiltshire cottage bought it in 2015, its dilapidated state was one of its most attractive qualities; they wanted a renovation project, and this place, with its quiet garden and beautiful trees, was an enticing prospect.

Enthusiastic from the outset, the work took less than a year, even with the structural work, revised layout and complete redecoration! Everything was reworked to reflect the owners’ lifestyle, and their frequent visits from their children and grandchildren. 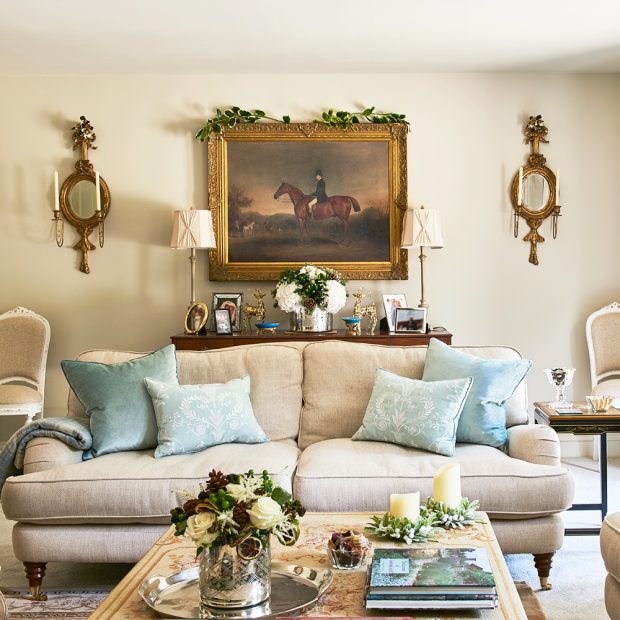 Classic Regency colours are featured throughout this comfortable living room, via the scattering of elegant blue cushions and the stone-toned seating. With such a strong heritage feel, you’d never guess this space was a newly built part of the cottage – the only way of telling that is by checking the ceiling height. The rooms in the original house are about seven feet tall, but the new ceilings are just over a foot higher.

The Christmas decor is minimal and classic, with cream pillar candles, surrounded by festive foliage, and the pictures adorned with similarly Christmassy leaves. ‘I decorate in a traditional way, and on Christmas Eve, the children leave letters for Father Christmas on a table beside the fireplace, together with mince pies and sherry for him and a carrot for Rudolph. Then we all hang stockings on the beam!’ 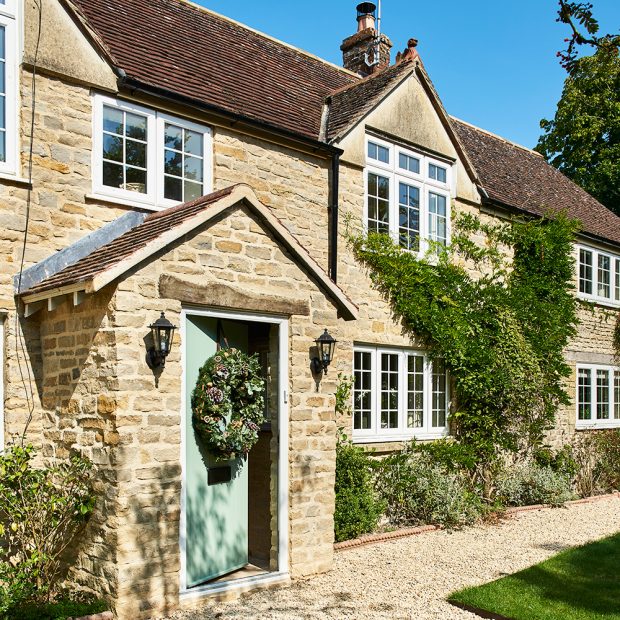 ‘At one end of the original building, we added a two-storey extension to create a sitting room and a kitchen-dining room on the ground floor, with our bedroom and bathroom above,’ say the owners. ‘We also decided to reconfigure the narrow staircase, enlarge the entrance hall and knock down internal walls upstairs so we could create two more spacious bedrooms and a bathroom.’ 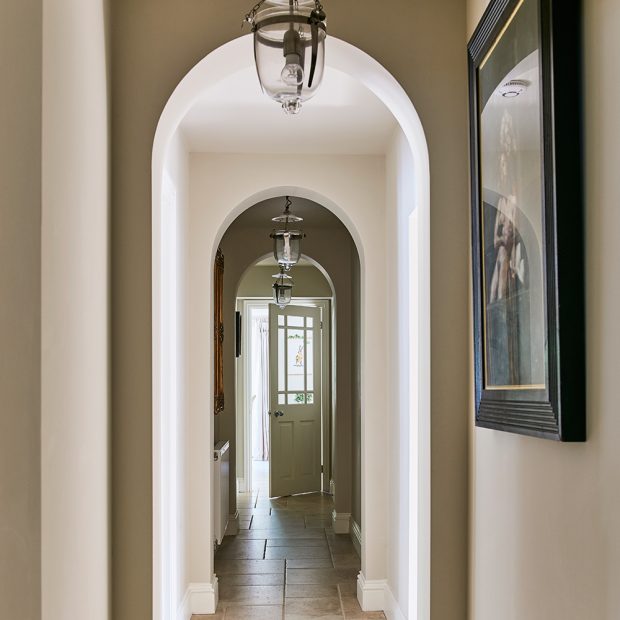 To make a bright backdrop for the couple’s classic paintings, family heirlooms and bespoke furniture, the couple chose pale wall colours throughout.

The sleek hallway – which links the sitting room and the kitchen with the utility room and snug at the opposite end of the house – sets the tone immediately when you walk through the door. To break up its length, arches were built and each section is further delineated by lamps, which the owners retrieved from storage. 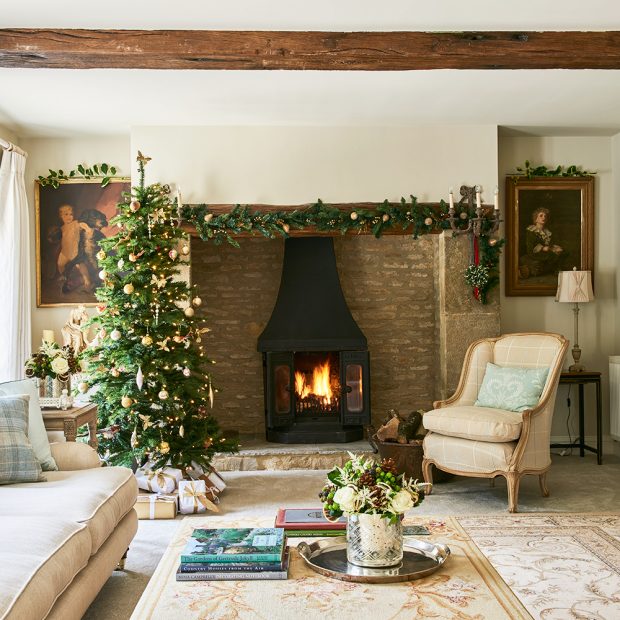 The inglenook fireplace is the focal point of the sitting room. ‘I spent ages sketching plans for it,’ says the owner. ‘Once I was happy with the design I bought a reclaimed wooden beam, then the stone was given an aged effect so it would look original.’ The old beams make the perfect place to hang stockings.

The rest of the furniture picks out the soft blush hues in the stonework. ‘I must have had the coffee table in the sitting room for about thirty years. I had a carpenter build it and cover it with a tapestry I bought,’ says the owner. 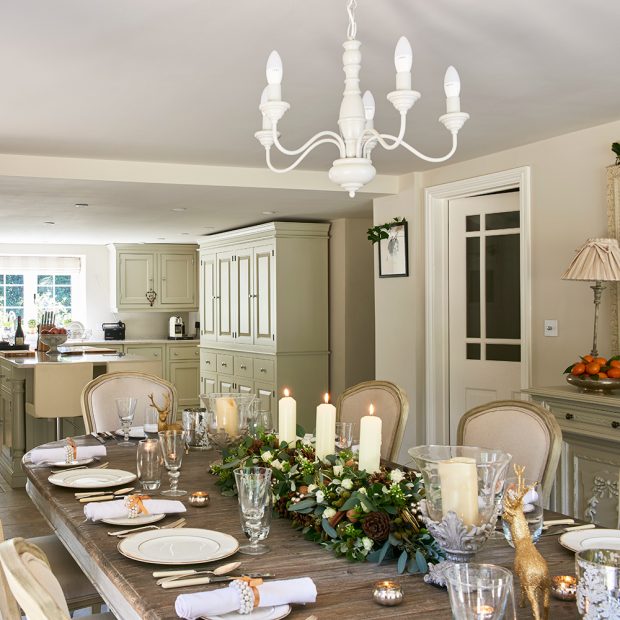 Part of the reason for extending the property was to create a kitchen-dining area for large family occasions. The owners also wanted to make the back of the house symmetrical by ensuring it matched an existing extension on the opposite side of the original building.

In keeping with the French tradition, the family throw a big dinner party on Christmas Eve around this beautiful dining table. 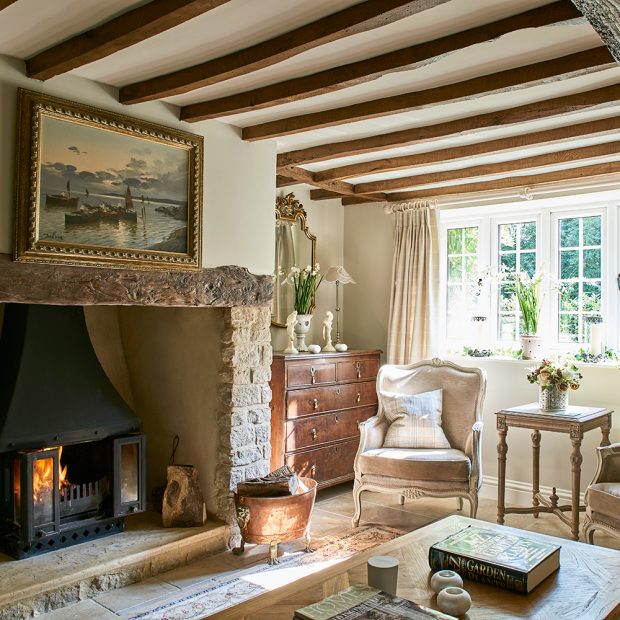 The definitive age of the property has been hard to pinpoint as it is actually two cottages that have long since been knocked into one, but parts of the building date back to the 16th century, as the elm beams and aged floorboards testify.

‘Uncovering smaller cross beams behind a false ceiling in the snug was definitely one of the highlights of the renovation,’ explain the owners. ‘But sandblasting them to remove the many layers of thick dirt and stubborn black paint was a nightmare – it created clouds of dust that found their way through the whole house.’

Now, this is the owners’ favourite room – they light a fire in the Dovre wood burner almost every night. 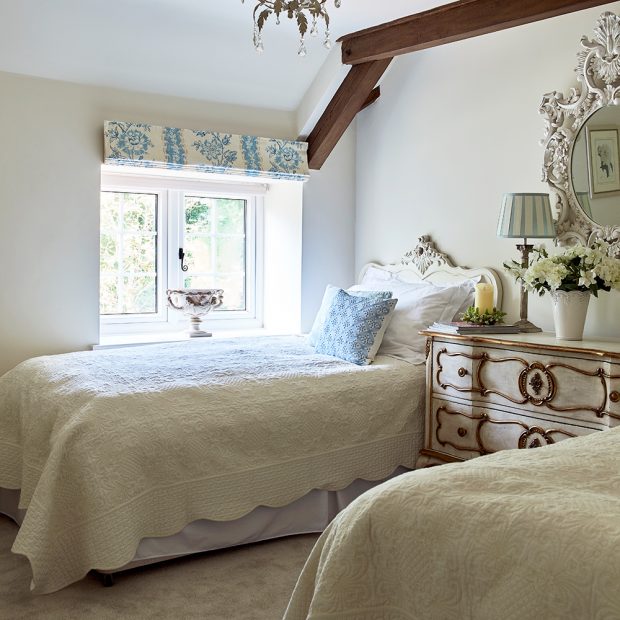 The guest room is a hit with the owners’ twin grandchildren, and you can see why; it’s adorably chic and cosy, with some lovely period touches that make the little ones feel grown up.

Accents of blue balance the ornate furniture, toning down the creaminess of the backdrop. Another of the rooms that was created by the new extension, this room has also been fitted with treated beams to bring it in line with the character and style of the old cottage. The decorative chandelier adds a touch of contemporary French design. 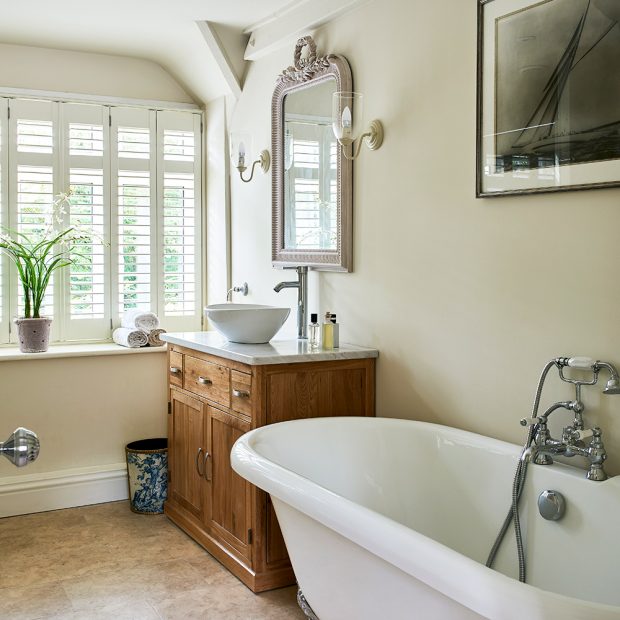 With its large, free-standing tub, louvre shutters and minimal decor, the bathroom makes a soothing and relaxing retreat. Due to its age, the floor was uneven meaning it could not be tiled. As a good alternative, with a similar look, the couple chose practical Amtico flooring.

With the renovations complete, the couple are able to make the most of their family’s visits. There is plenty of room for all to stay, and everyone enjoys mingling in the new kitchen-dining room and sitting room. 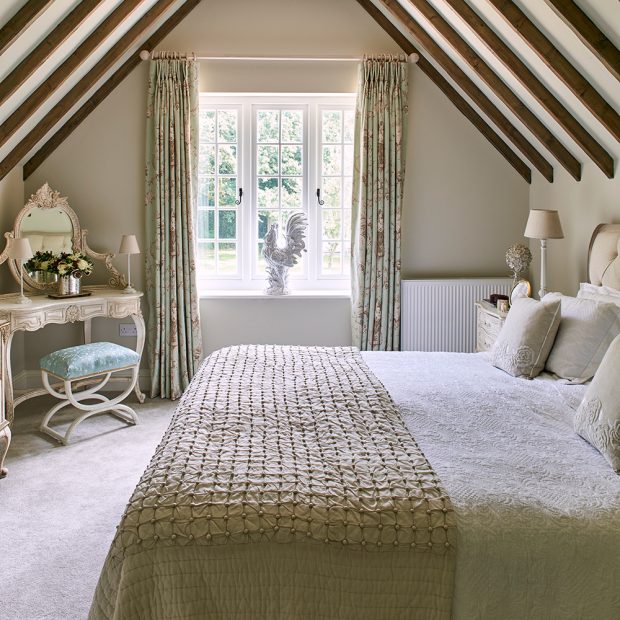 The bedroom was part of the new extension, but is very much in keeping with the traditional cottage decor. To give the sawn timber beams used in this new space an aged look, the couple commissioned beam experts to treat them with a specialist process.

The decor in the room continues the French Regency theme that runs through the entire property, with the vanity table in the corner and candelabra chandelier.