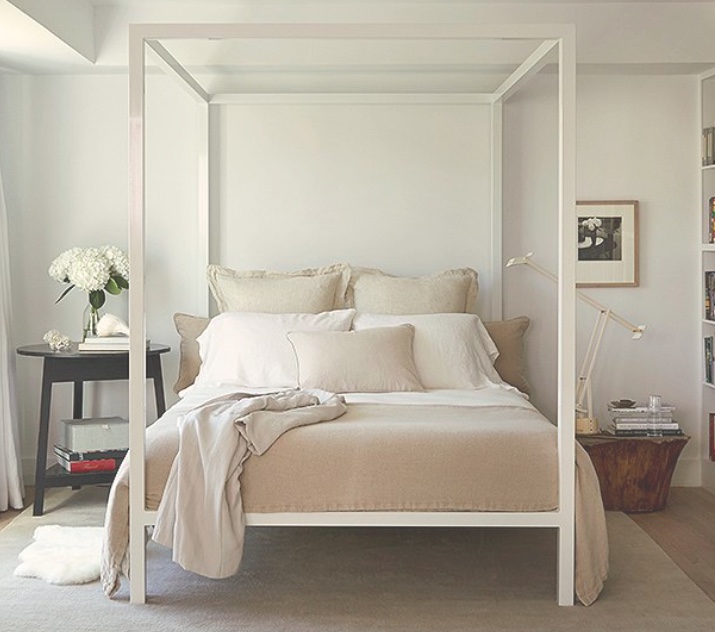 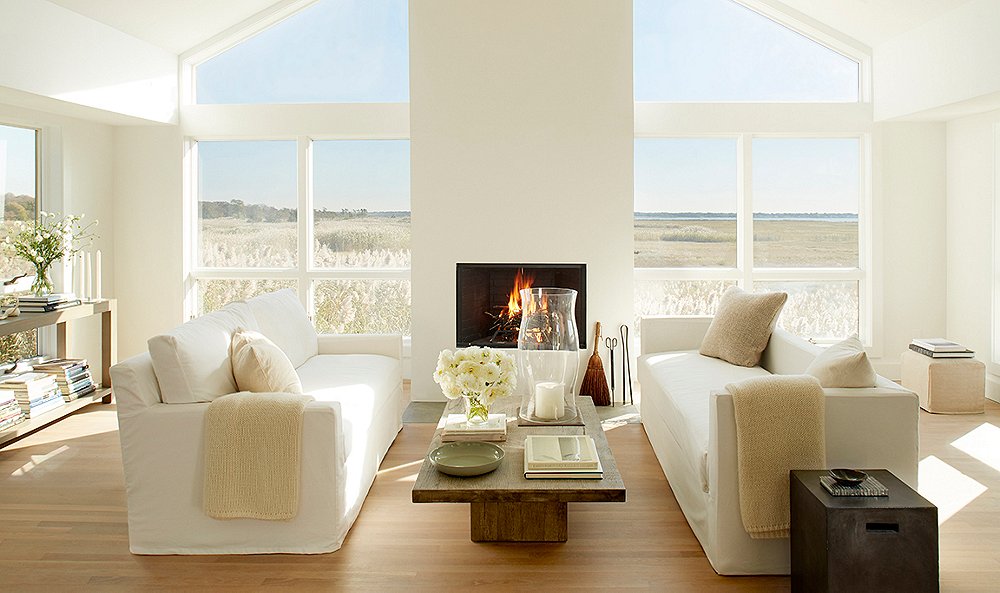 A fire crackles in the fireplace. Outside, a white heron glides across the marshland, cutting through a soft seaside haze.

And everything is white: the walls, the banisters, the furniture, the sponge in the kitchen sink. It’s a scheme that Tricia has become known for.

Over the course of her career as a magazine editor, designer, and creative consultant for companies including Wedgwood and Ralph Lauren, Tricia has mastered the art of crafting colorless spaces with a sense of soul. 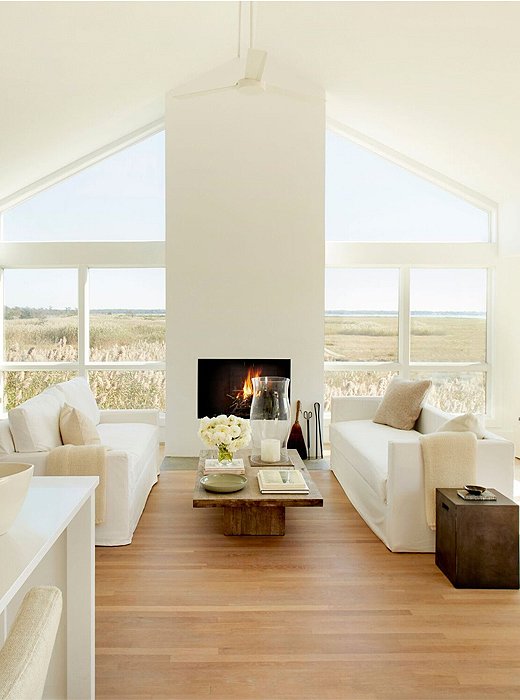 Two slipcovered sofas flank the living room’s fireplace, creating a layout as serenely structured as the house itself. A cement stool and an unfinished wood coffee table speak to Foley’s love of mixing textures and tones.
Built in 1992, the house was designed by an associate of Horace Gifford, an architect best known for modernist residences on Fire Island Pines.
It is the newest home Foley has ever lived in, and it possesses many of the architectural signatures commonly associated with architects such as Gifford, Pei, and the Bauhaus bunch, all of whom she cites as influences.
One could also easily compare its simple barnlike structure and seemingly vast interior spaces to the International Style house in which Foley grew up.
But to truly grasp Foley’s style, one mustn’t look to the work of an architect but instead to the words of one of her literary heroes: Henry David Thoreau. 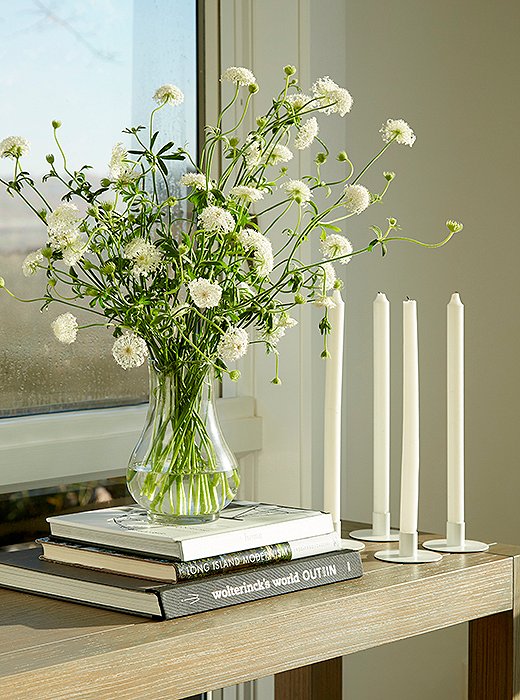 A Parsons-style console in cerused oak is the perfect spot for fresh-cut blooms. Below, two shelves display a few of Foley’s many books, the rest of which are downstairs, organized by category.
“Simplicity, simplicity, simplicity!” Thoreau wrote in Walden. “Let your affairs be as two or three and not a hundred or a thousand; instead of a million count half a dozen and keep your accounts on your thumb and nail.”
It’s this line that best explains the genius behind all that Foley does.
Open the cupboard where she keeps her china and you will find Wedgwood plates, bowls, and pressed-glass tumblers so perfectly stacked and arranged that you wonder why she keeps them hidden.
Nothing is superfluous, and as a result everything is easy to maintain. The kitchen’s many textures speak to one of Foley’s cardinal rules: Don’t do everything in the same finish. “Leave the walls matte, do a coat of semigloss on the cabinets, and enamel on the furniture,” she says.
A self-described “purist,” Foley appreciates functional design but still maintains a love of decoration. “I like to mix different shades and textures,” she says, a point illustrated by her bedroom’s taupe carpet, linen drapes, and steel canopy bed, and again in the kitchen’s quartz countertop, slipcovered stools, and semigloss cabinetry. 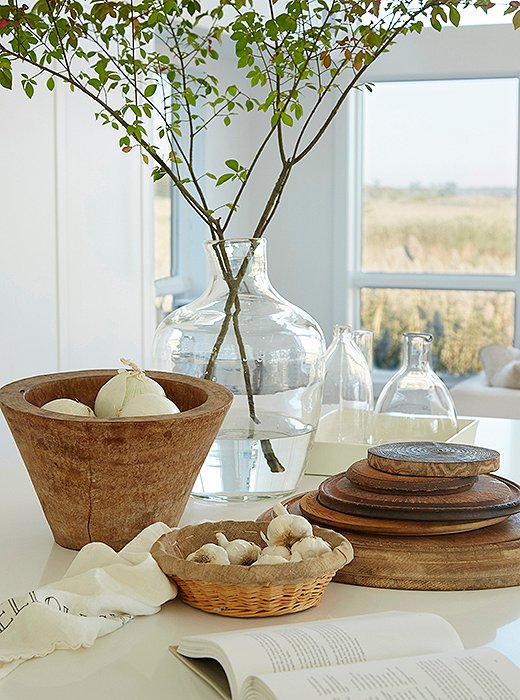 Beauty while you work: A stack of cutting boards and a basket filled with onions are the perfect finishing touches.
And though each space might make visitors think twice before accepting a glass of rosé (let alone cabernet), Foley doesn’t appear to have any issue keeping her white house clean: She cleans as she goes.
Nothing is given the chance to pile up—or stain, for that matter. Even laundry is a ritual. “I’ll bleach all of the slipcovers once a year,” she says.
Thinking back to life in her previous home, an 18th-century farmhouse with five fireplaces, Foley considers the upkeep here easier.
She appreciates the effortlessness. Like Thoreau in the woods, she chooses to expend her energy on what excites her most: life itself. 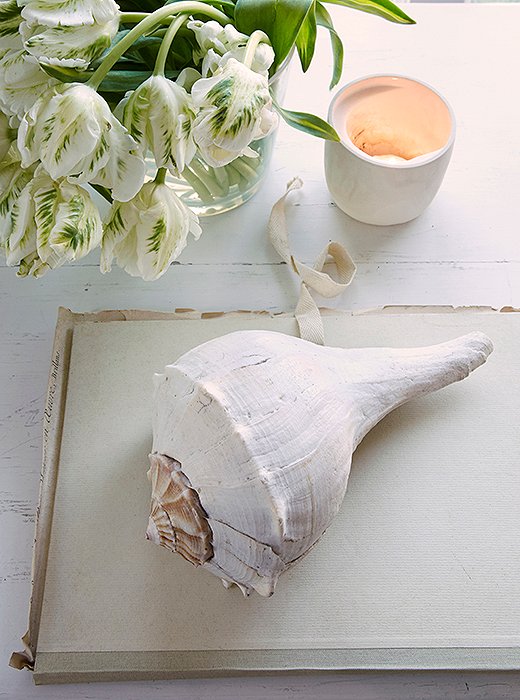 A tea light, a seashell, and a notebook jotted with ideas: These are things Foley loves. 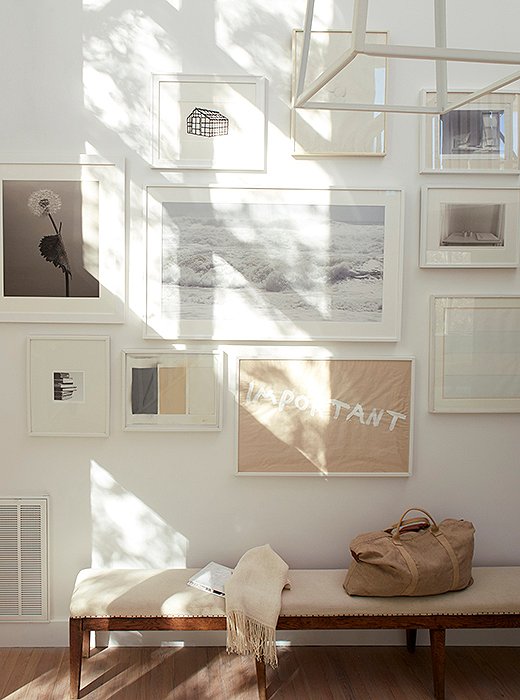 A two-story gallery wall greets visitors downstairs. The sheath of brown paper that reads “Important” was painted by friend and artist Maya Schindler, who tipped Foley off that the house was for sale. A steel stool sits beneath a still life matted and framed in two tones of white. Foley had the floors refinished to feel “modern and warm.” 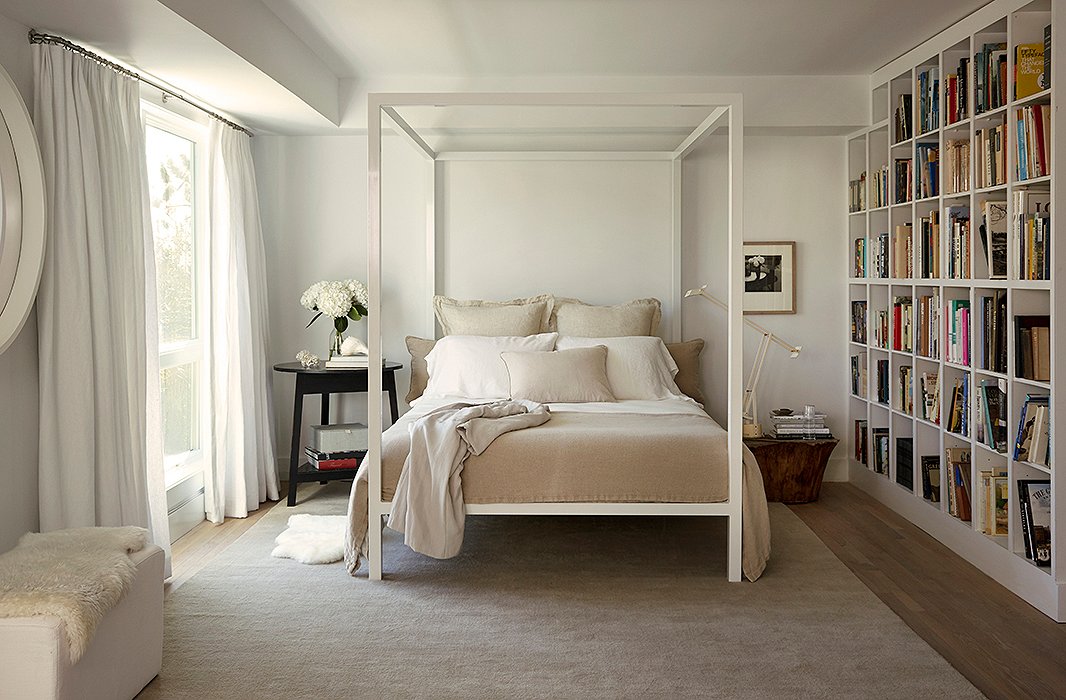 A Tizio lamp separates the canopy bed from a wall of built-ins designed by Foley, with cubbies that make organizing books by category an easy feat. On the floor, a taupe rug bridges the tonal gap between the oak floors and the matte walls (painted in Benjamin Moore’s Decorator White). 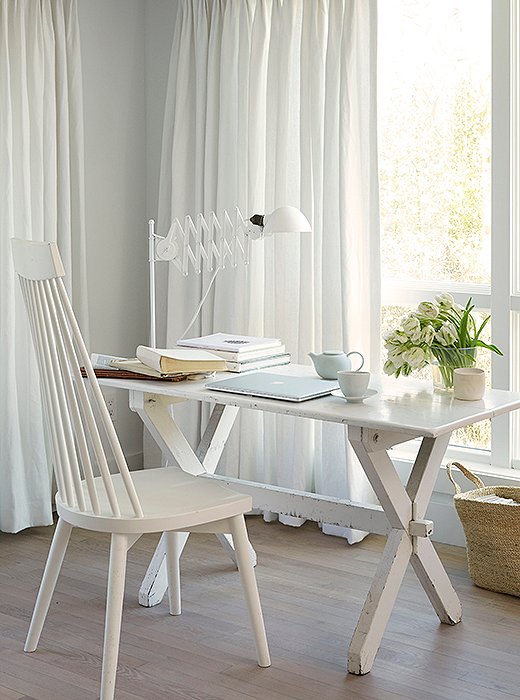 In a bedroom corner, an X-frame desk painted in white enamel is the ideal spot to write a note or take a call. 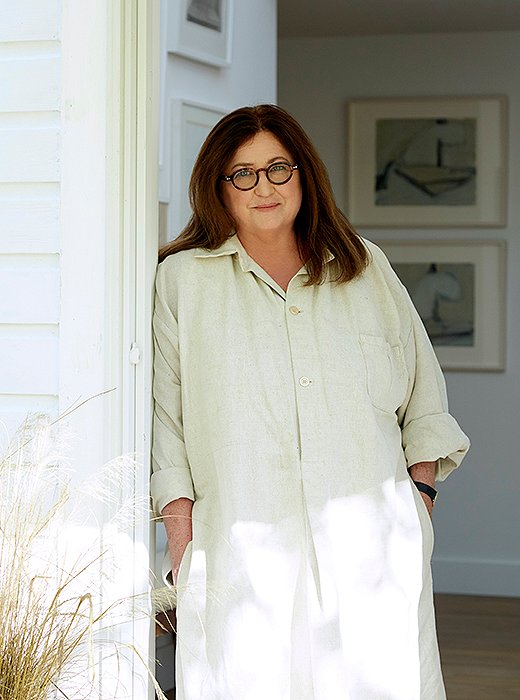 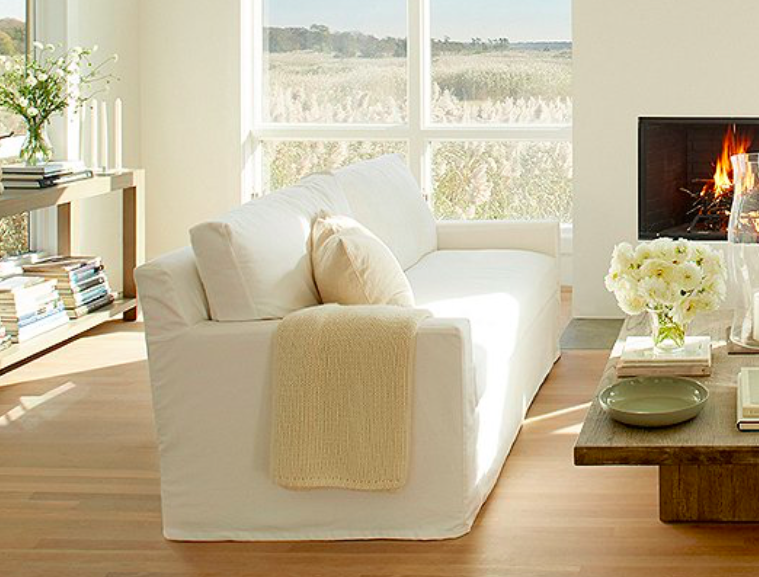 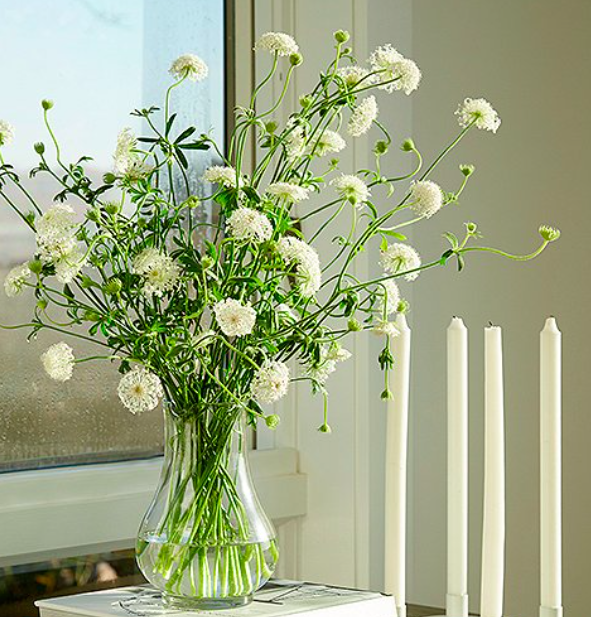 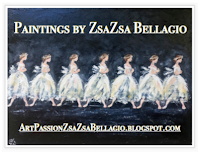