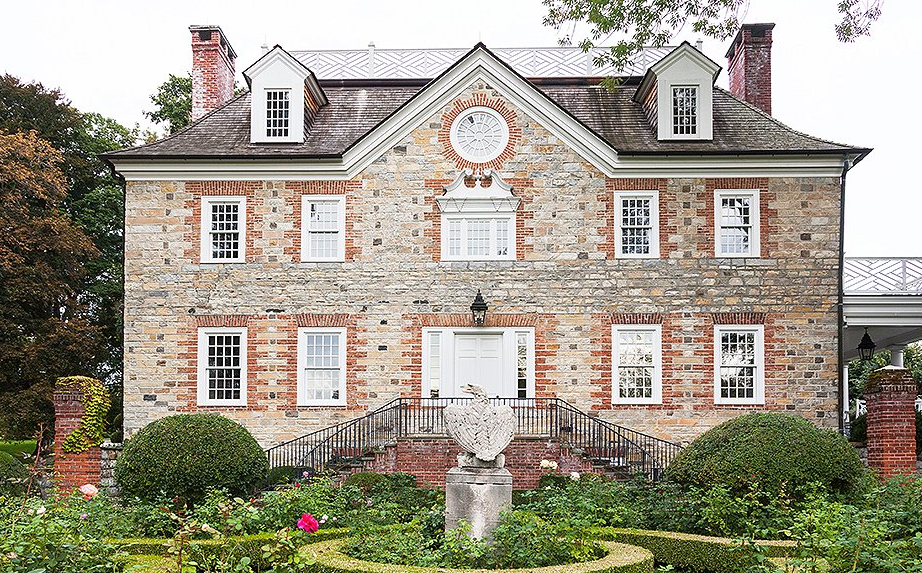 Inside the Next-Level Elegance of Carolyne Roehm’s Connecticut Estate

As the world goes ever more casual, it’s refreshing to encounter Carolyne Roehm, who celebrates the beauty of classical design, formal gardens, and sparkling dinner parties. It’s one thing to admire these things in the abstract; it’s another to live amongst them, day in and day out. But she does. And that’s precisely what she writes about in her lush, inspiring books: ways of elevating the everyday. Her latest publication, At Home in the Garden, sums up her vision of what the garden can be in one’s life. 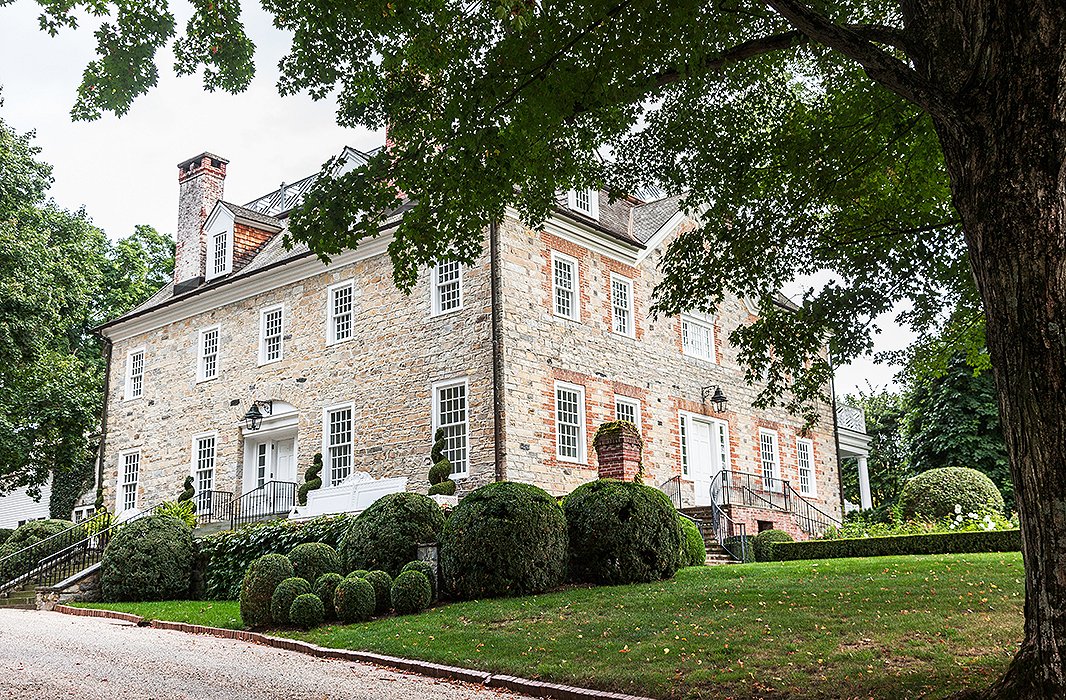 Rebuilt after 1999, the house took all its architectural guidance from the original 1765 Georgian house. It’s surrounded with 59 acres of pastoral land, gardens, and ponds

Carolyne’s ultimate canvas is her beloved Connecticut retreat called Weatherstone, tucked in a pastoral corner of Connecticut. There she’s created a beacon of neoclassical architectural; true to the era that inspired it, not one of the antiques inside is later than 19th century. And it’s wrapped with parterre gardens—those geometric gardens you might have seen in Versailles. 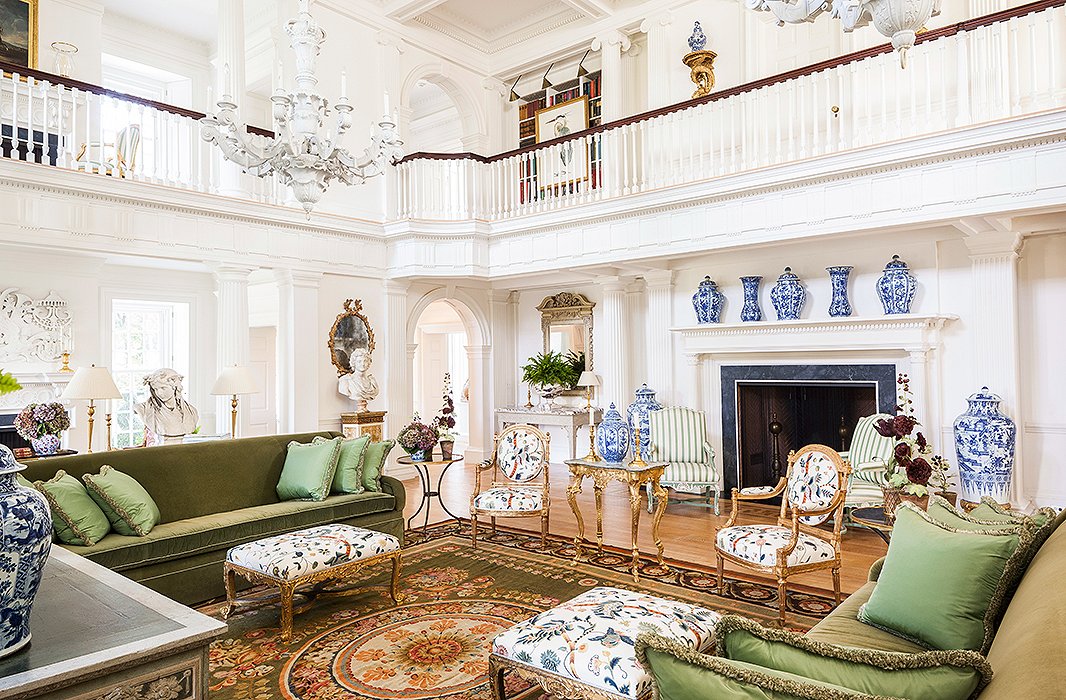 “I have many things that were made in China 10 minutes ago, but my best antique Chinese porcelain is all in the great room,” Carolyne says. These pieces were mostly chosen for their dramatic scale and the clarity of the blue against the white. The needlepoint rug came from David Easton’s Long Island home, while the pair of gilt chairs are English.

But before we get carried into another century, let us say this: Carolyne’s no anachronism. She’s as busy and Scandal-addicted as any of us. Her restoration projects and her output of books and blogs makes the head spin. Yes, she’s listed in the International Best-Dressed Hall of Fame, but most days are so busy that she’s been known to wear yoga pants, “and then I never get around to doing any yoga!” She’s like her home in that way—full of graceful refinement but grounded in lots of natural beauty. Step inside Carolyne’s world. 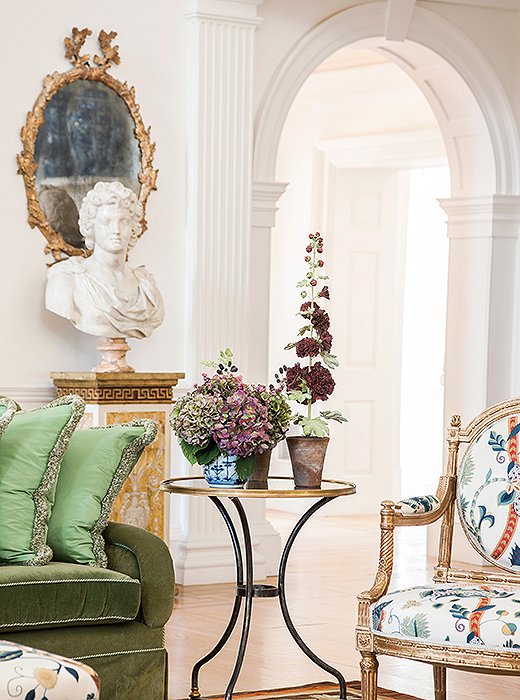 Each room features a different tone of white on the walls, achieved by mixing up to four paints. Here, the white sets off the classical elements of a pilaster next to a gentle arch.

More than 30 years ago, Carolyne and her former husband bought Weatherstone, a 1765 Georgian mansion with a blend of neoclassical detailing and some Colonial notes (low ceilings, for example). She loved every inch, and over the years Weatherstone carried her through a divorce and all the rerooting that comes with it. 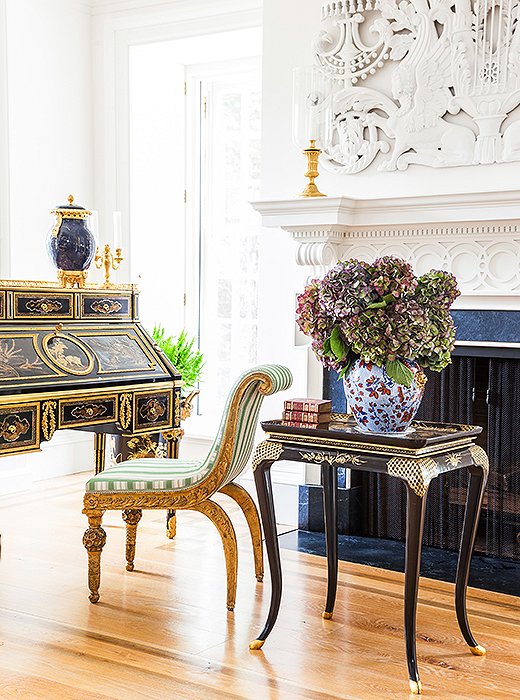 While graceful in its outlines, neoclassical furniture is often hyperdetailed in its ornamentation and features motifs such as acanthus leaves, garlands, and other naturalistic forms found in ancient Greek and Roman sculpture.

Then, in 1999, an electrical fire burned the original home to the ground. Carolyne’s devastation was intense: “The shock was so sad, I thought about leaving it. Then I thought, This could be a window to creating something that’s truly mine. By then, I was divorced with no children, so I didn’t need lots of extra rooms.” She decided to rebuild it in a pure Georgian form, with neoclassical architectural notes—pilasters, graceful arches—throughout, with no more low ceilings. And she decided to devote square footage to one dramatic, two-story great room, which you walk into when you first come inside. “I’d always admired a two-story room in a New York apartment and thought that would be magical,” she says. Carolyne sold her Paris apartment to remain in Connecticut and stay hands-on during the entire construction process. 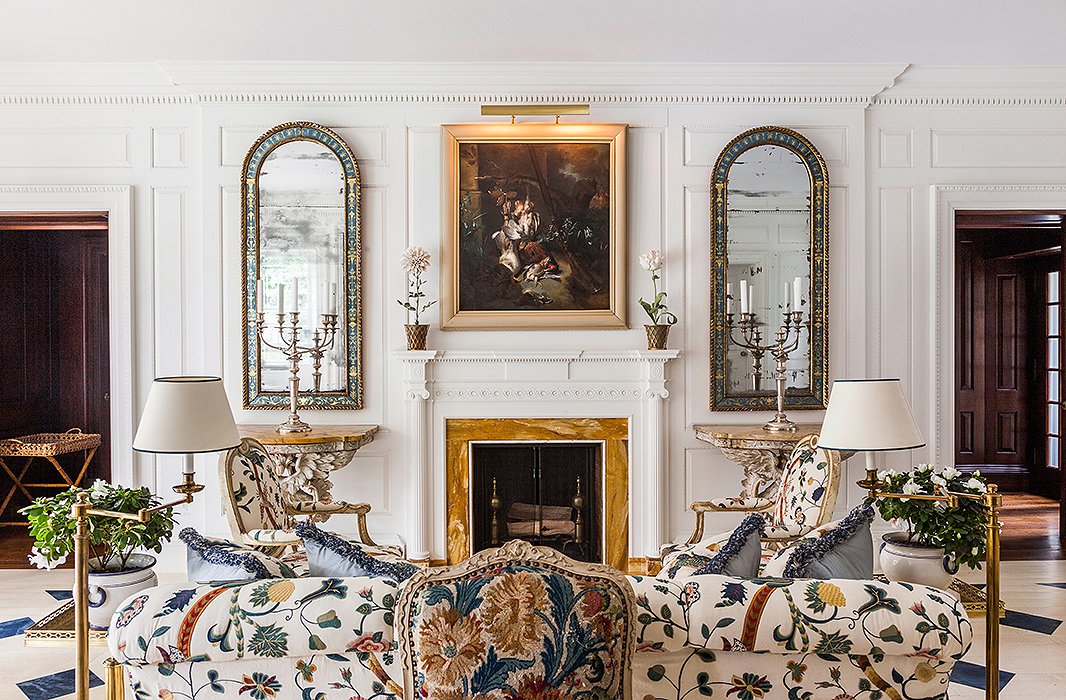 Carolyne worked for Oscar de la Renta early in her career, and that shaped her feelings about textiles. “When I find a fabric to use, I truly love it,” she says. “I want you to be able to see the pattern and not have it buried by other stuff.”

“Classicism is my great love,” Carolyne says. “I wanted the whole classical order, down to the Corinthian columns.” Basing a blueprint on ancient Greece—or rather, the neoclassical period of the mid-18th to mid-19th centuries—might seem lofty, but in Carolyne’s hands, it became a design scheme that beautifully suits her independent lifestyle. “Classicism was born out of the humanities, and everything is done so that the human form is never diminished,” she explains. “In very modern homes, I feel cold and alone. But I never feel alone in these rooms.” And with 16 windows in the great room, she managed to banish any darkness. “The light gets extraordinary,” she says. 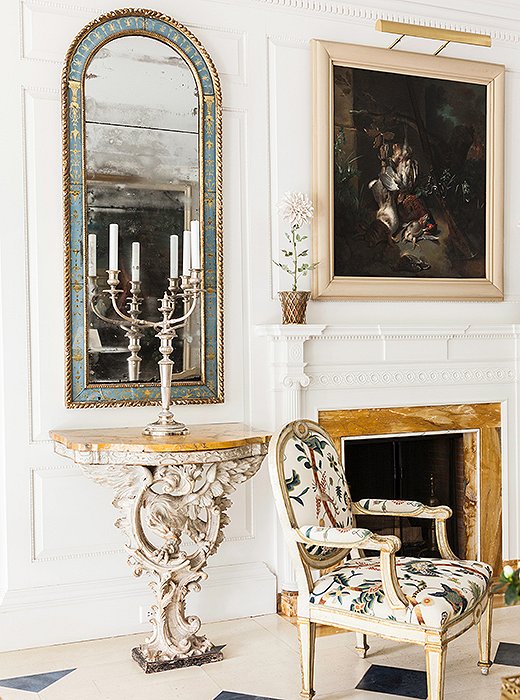 The pair of verre églomisé—French for “gilded glass”—mirrors reinforce the light-filled atmosphere of this room.

While the original house had lots of darker English mahogany furniture, Carolyne wanted these furnishings to be light. Starting with Gustavian furniture—with all of its airy painted tones—she expanded to painted furniture from Italy, France, and England. All of it suits the delicate lines of the neoclassical architectural backdrop. “The latest my furniture goes is about 1825,” she says. 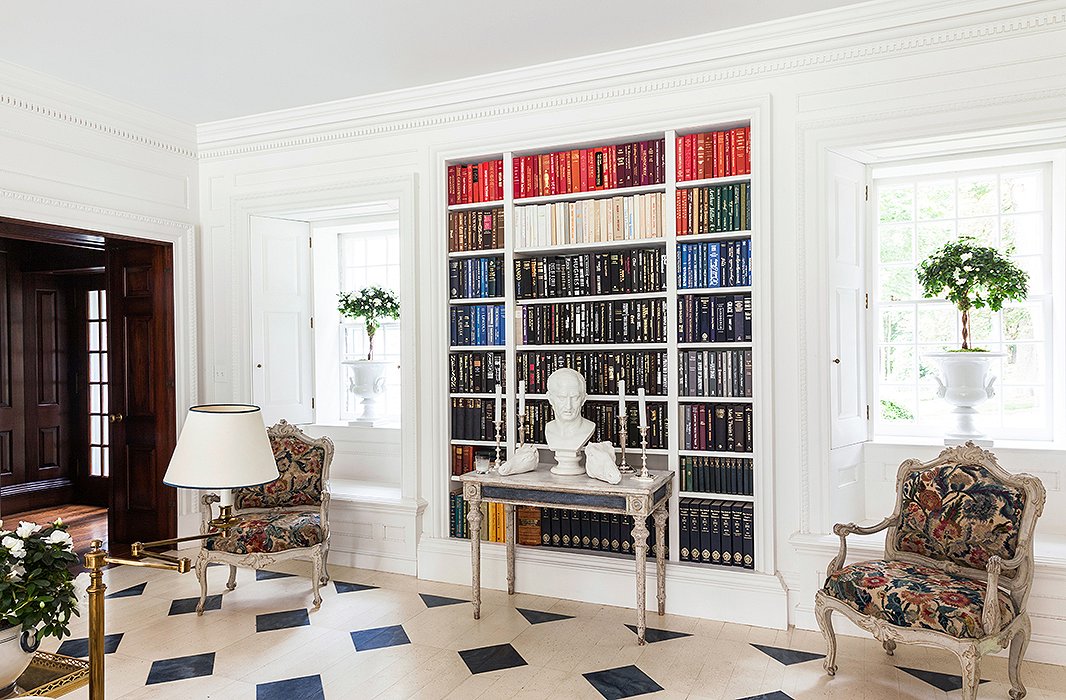 The effect of painted furnishings, painted floors, and a white paint custom-blended for the walls is totally fresh and sets this space apart from the dark wood hallway to the left. 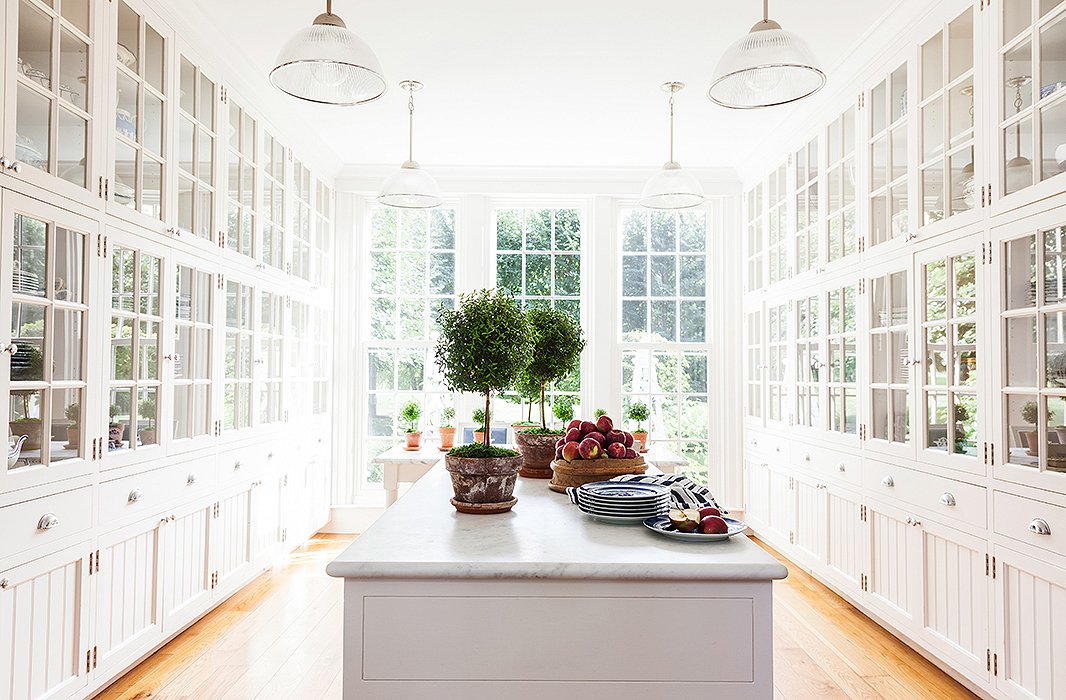 While outfitted with modern features such as a vast marble island, the breakfast room has that key classical element: perfect symmetry. 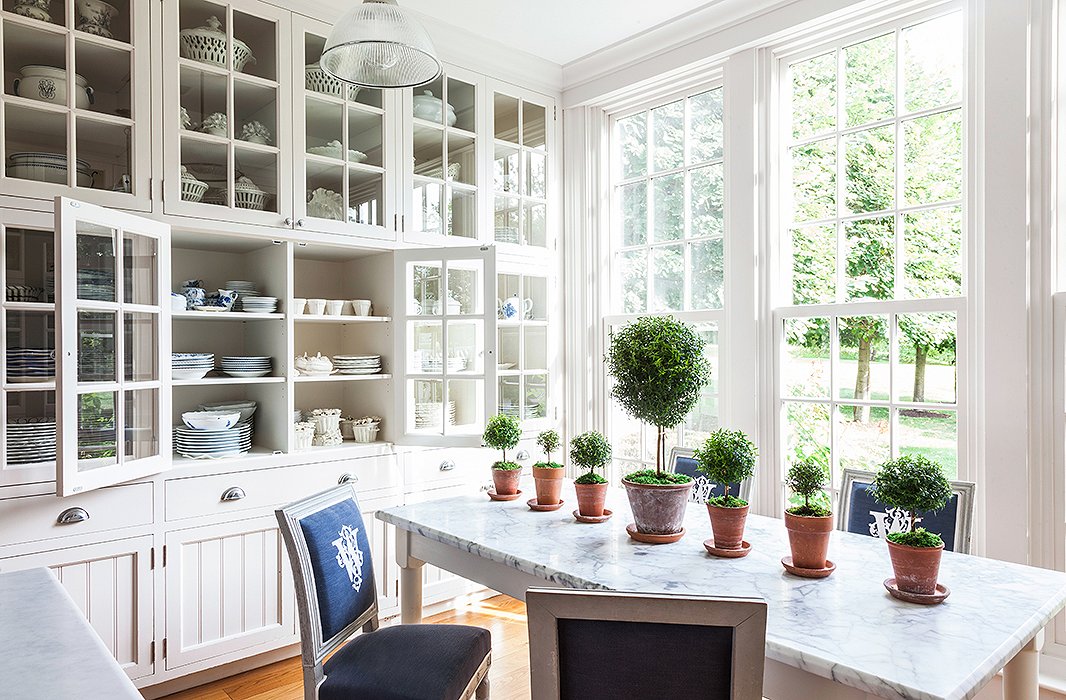 Many of her patterns are antique, with 8 or 10 settings. For larger parties she’ll lean on reproductions, a number of which are blue and white (that’s “the backbone” of her collection, she says). 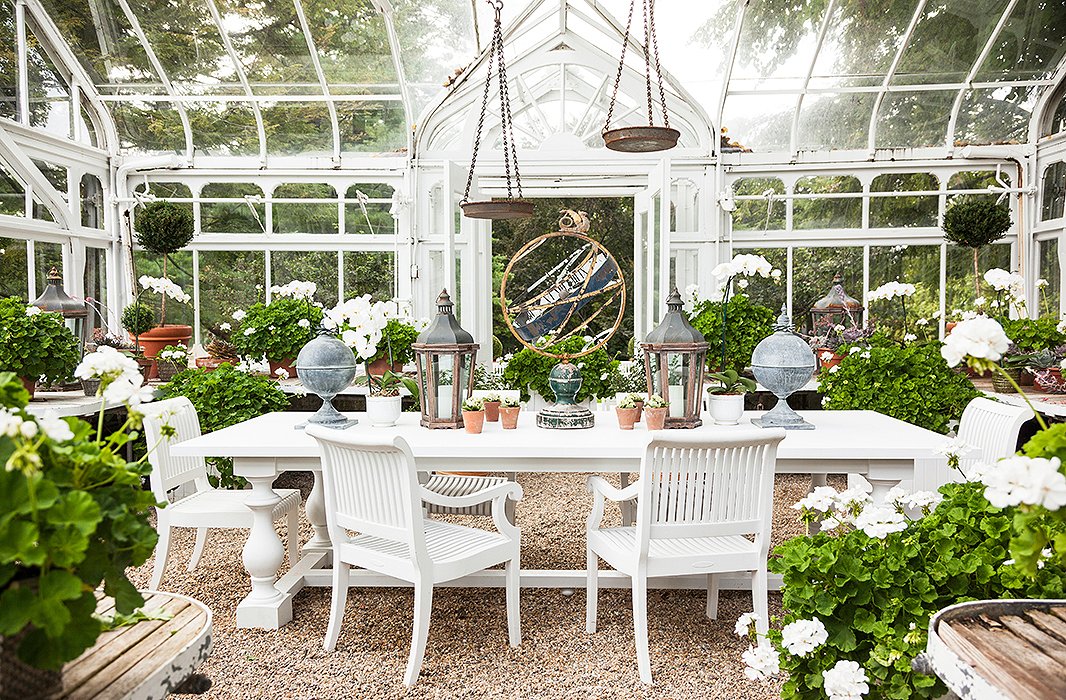 Carolyne “prettified this little glasshouse” with lots of geraniums and a mix of metals. 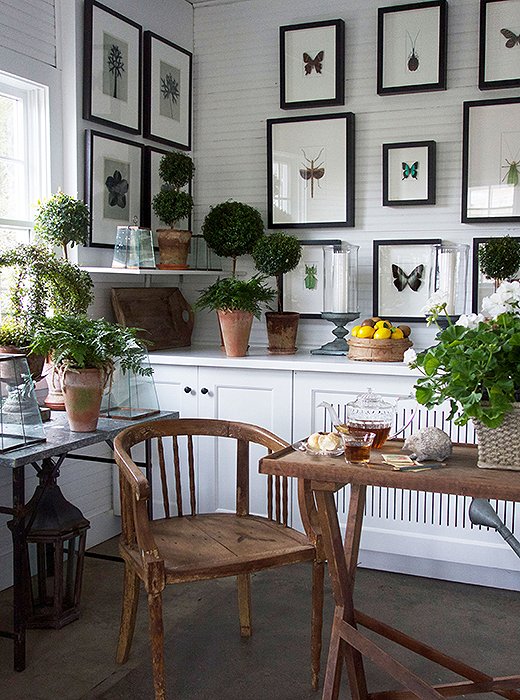 This photograph of the nook by Carolyne’s collection of butterflies comes from At Home in the Garden.

At the end of a day, there’s nothing like a proper retreat. “I wanted one cozy room,” Carolyne says of her wood-paneled library. “When you’re down or tired, you need a retreat.” After a big snowstorm knocked the power out, Carolyne realized how lovely it was to light rooms by candle—“That became one of my favorite nights.” Since then, she filled this room and others with hurricane lamps, which she loves for their weighty elegance. 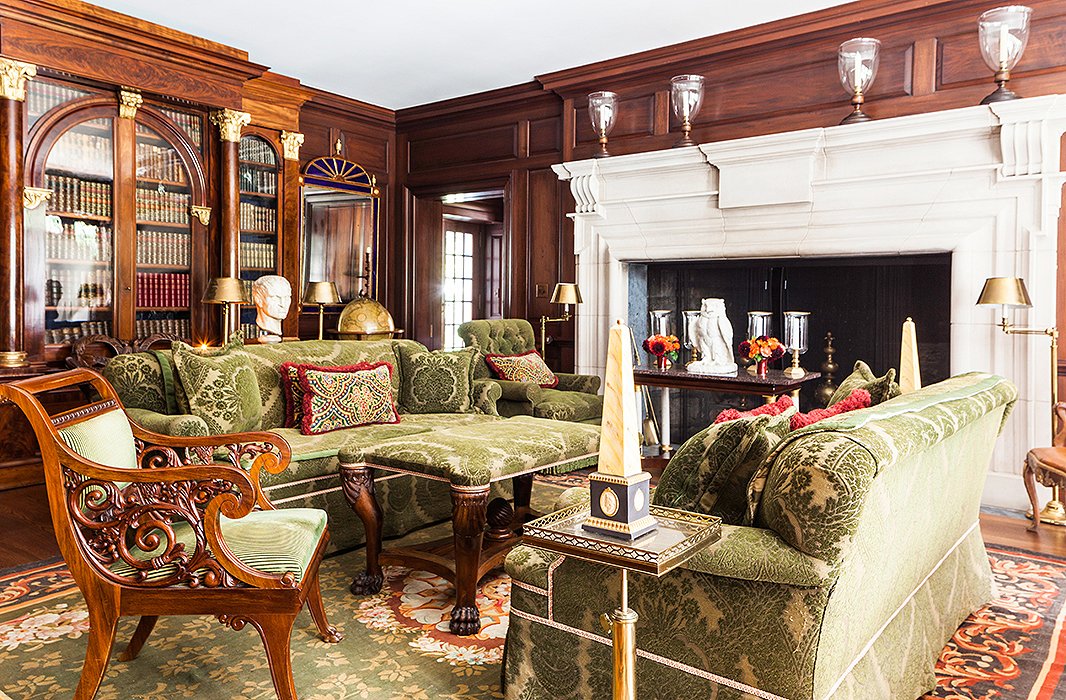 The Rubelli fabric on a pair of carved Russian chairs, which were in Carolyne’s former Paris apartment, inspired the green palette throughout this room, including the clipped-velvet damask on the sofas.

Though Carolyne grew up in Missouri, unaware of formal gardens and dreaming “of being a fairy princess with a tiara,” she has long since fashioned her life around her passions for interiors, for flowers, for beautiful things. It has all taken her hard work, steady focus, and a driving passion. “It’s a luxury and a blessing to have these homes, but it comes with a lot of responsibility and work. Nothing happens by itself. I have a lot of help, but I don’t want to turn everything over to a staff. I want to be totally involved, since I love it all.” That means, while she sets about restoring a Charleston mansion, she’s “the Queen of Trader Joe’s and Lowe’s,” going there twice a day to keep the project going. 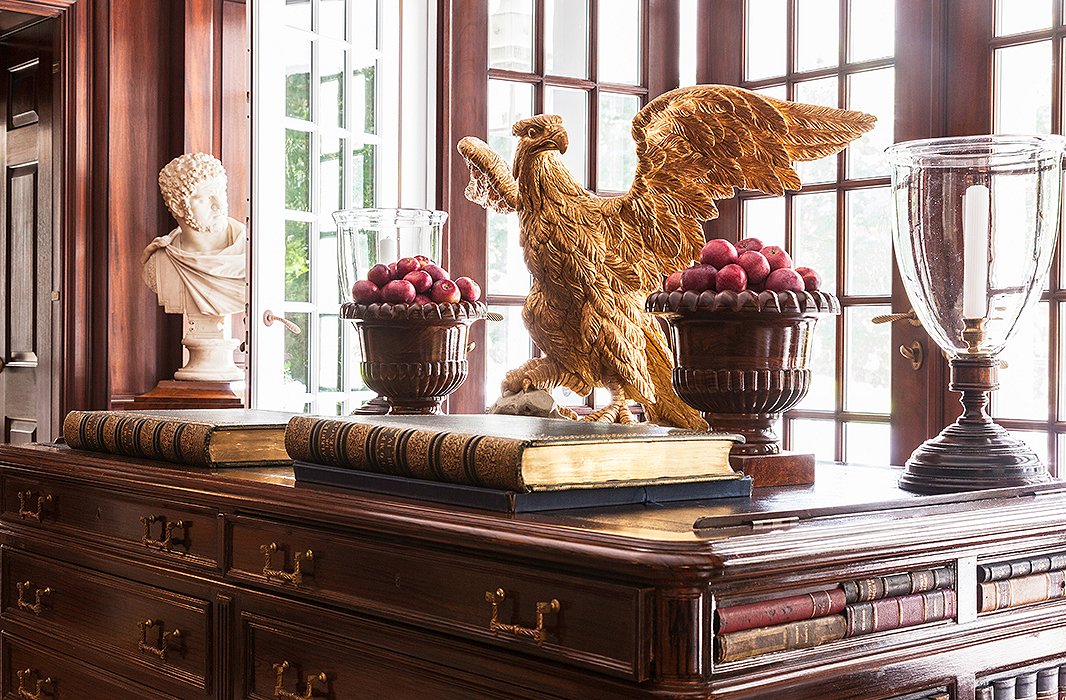 An English library desk is topped with leather, making it ideal for reading the antique books.

As for how and where she finds peace—besides a morning walk through the garden—she says, “I can’t stop hopping along. I’m working on six projects, and my brain is everywhere at once. I flunked meditation, but watercoloring for me is the only time I’m quiet and focused. I do need to fight for more time for watercoloring.” 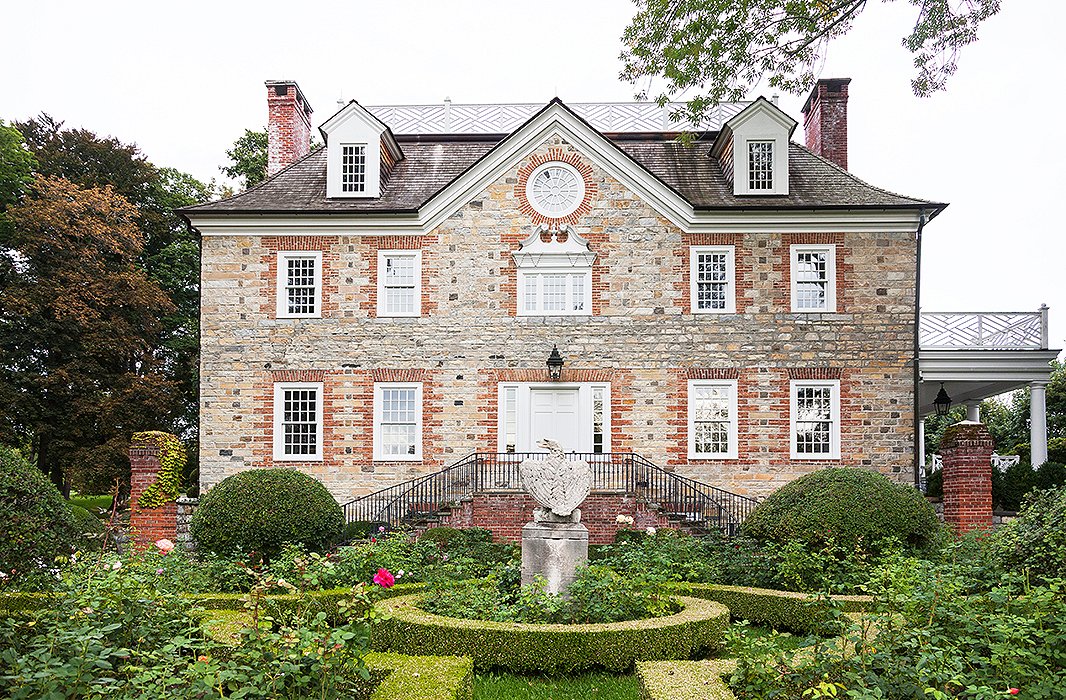 A view looking over the rose garden—which Carolyne calls in At Home in the Garden “a formal garden, but a happy one.” Korean boxwood, which survives New England winters well, frames the roses.