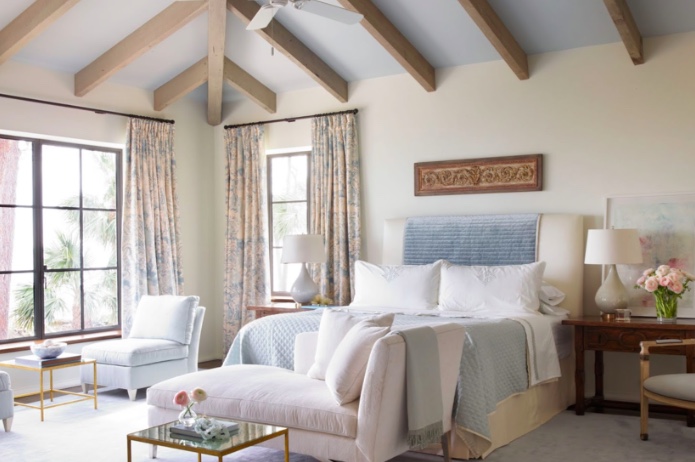 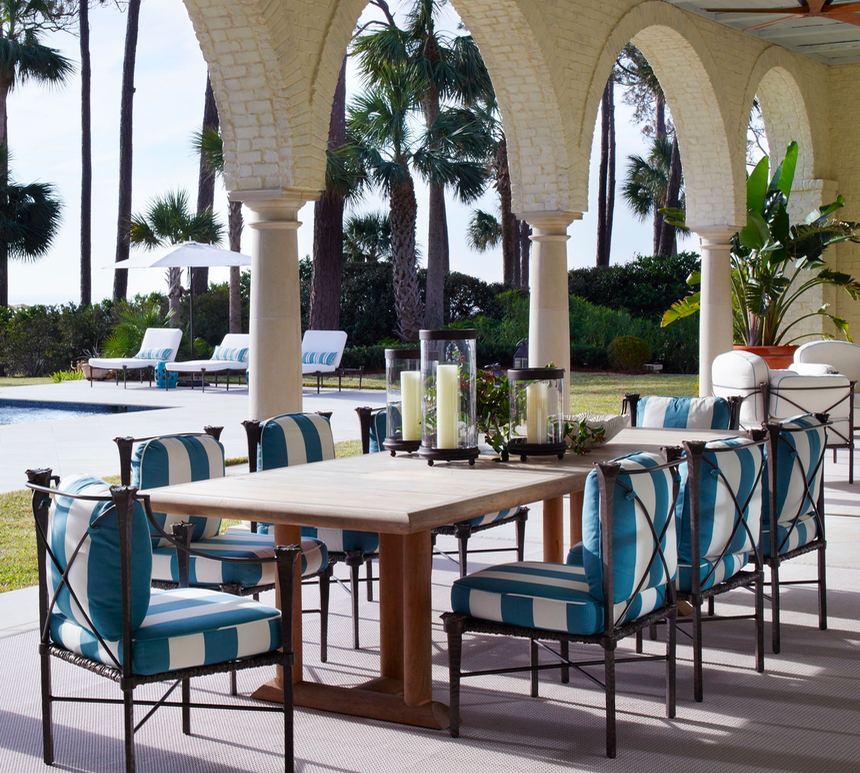 Sophisticated and calm, a home on Georgia’s Sea Island welcomes every day—not just on weekends. 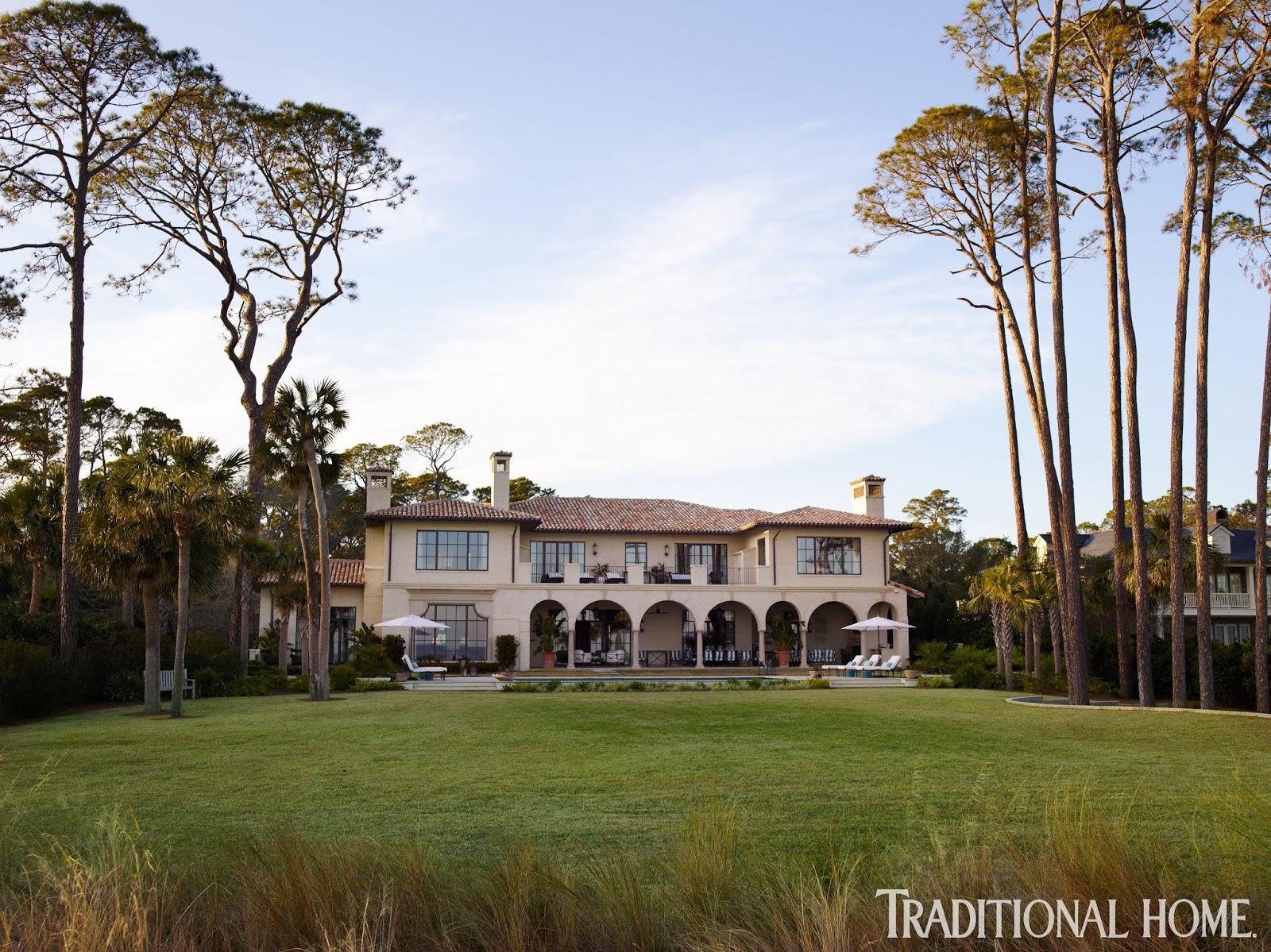 Sometimes the road home finds us rather than the other way around. Longtime clients of Atlanta-based design luminary Suzanne Kasler had long imagined a second home—a place where they could savor long weekends and vacations in tranquil bliss. But the question was: Where? 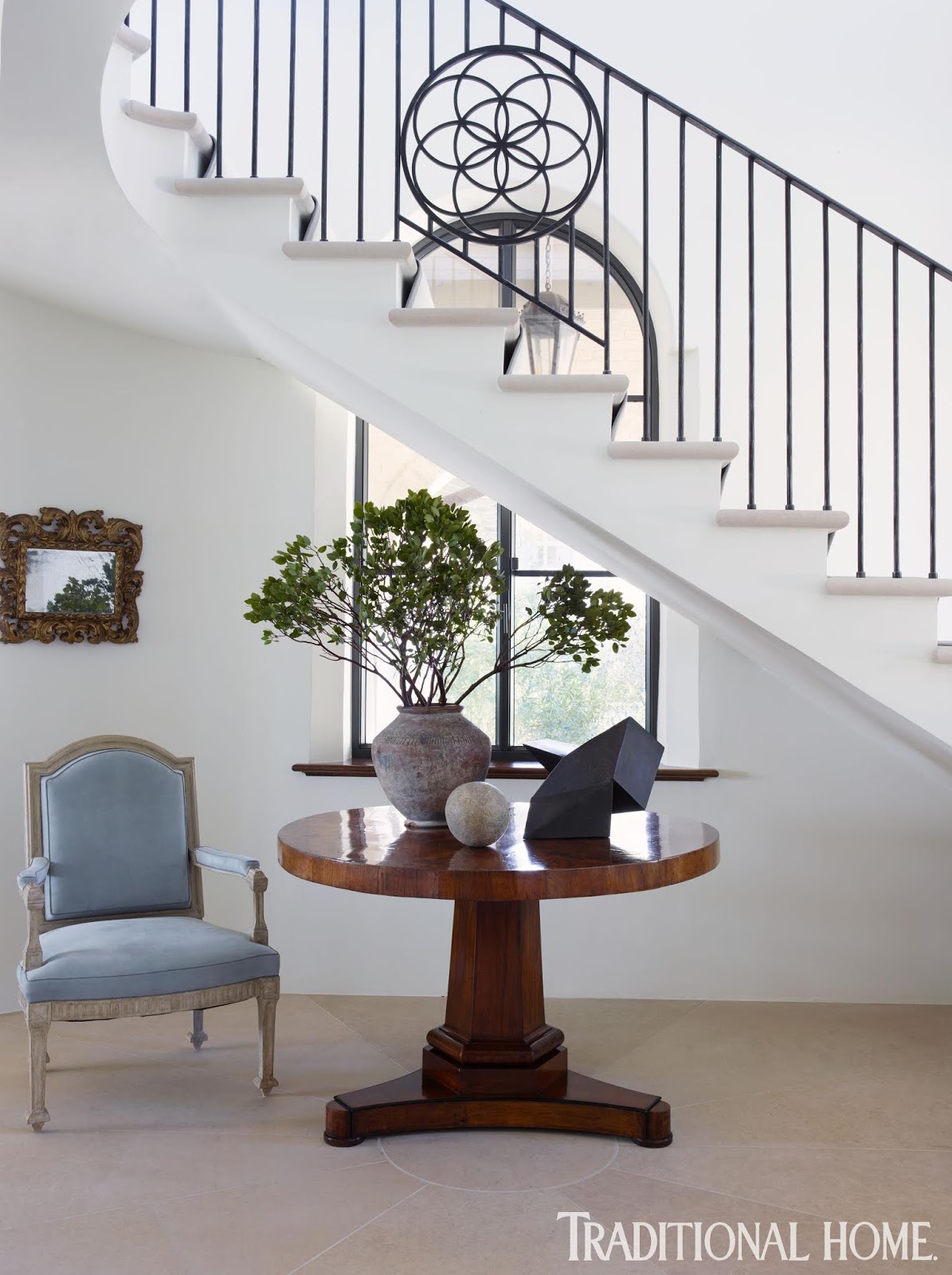 The family, a couple with three college-age daughters, had an equal affinity for the mountains and the beach. Their path was unclear until an oceanfront property on Georgia’s Sea Island, about six hours from their primary home in Atlanta, seemed to call their names.
They snapped up the spot and immediately called on architect Thad Truett to bring their dream home to life. 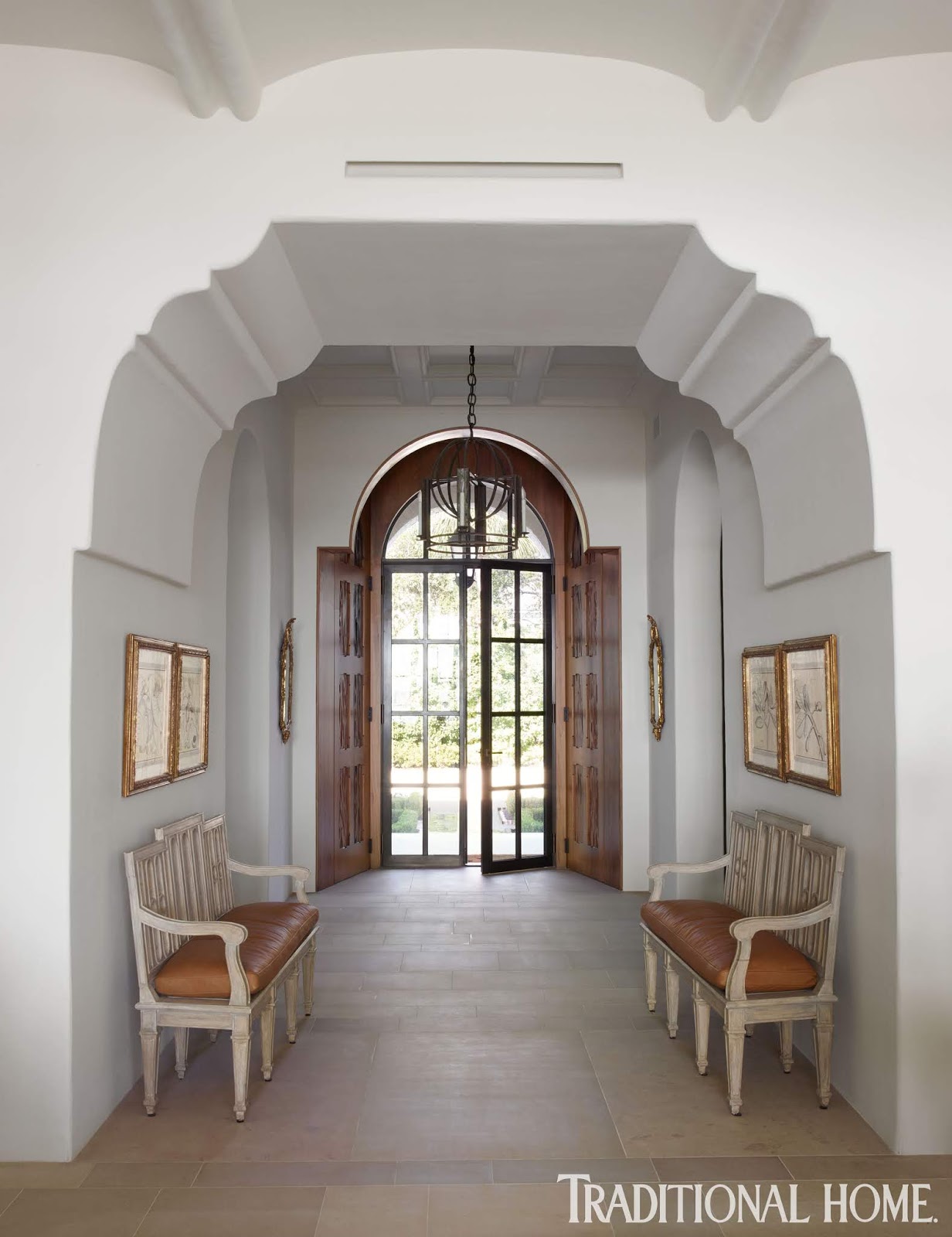 Truett, who also owns a home there, understands the vernacular of Sea Island architecture. He set out to design a house that adheres to the style seen in many of the island’s historic homes, all built in the 1920s.
“Mediterranean Revival architecture is the identity of Sea
Island,” Truett says. “This house needed to feel like it had been here for a long time. And with the water so close by, it was also all about building a house to take advantage of the views.” 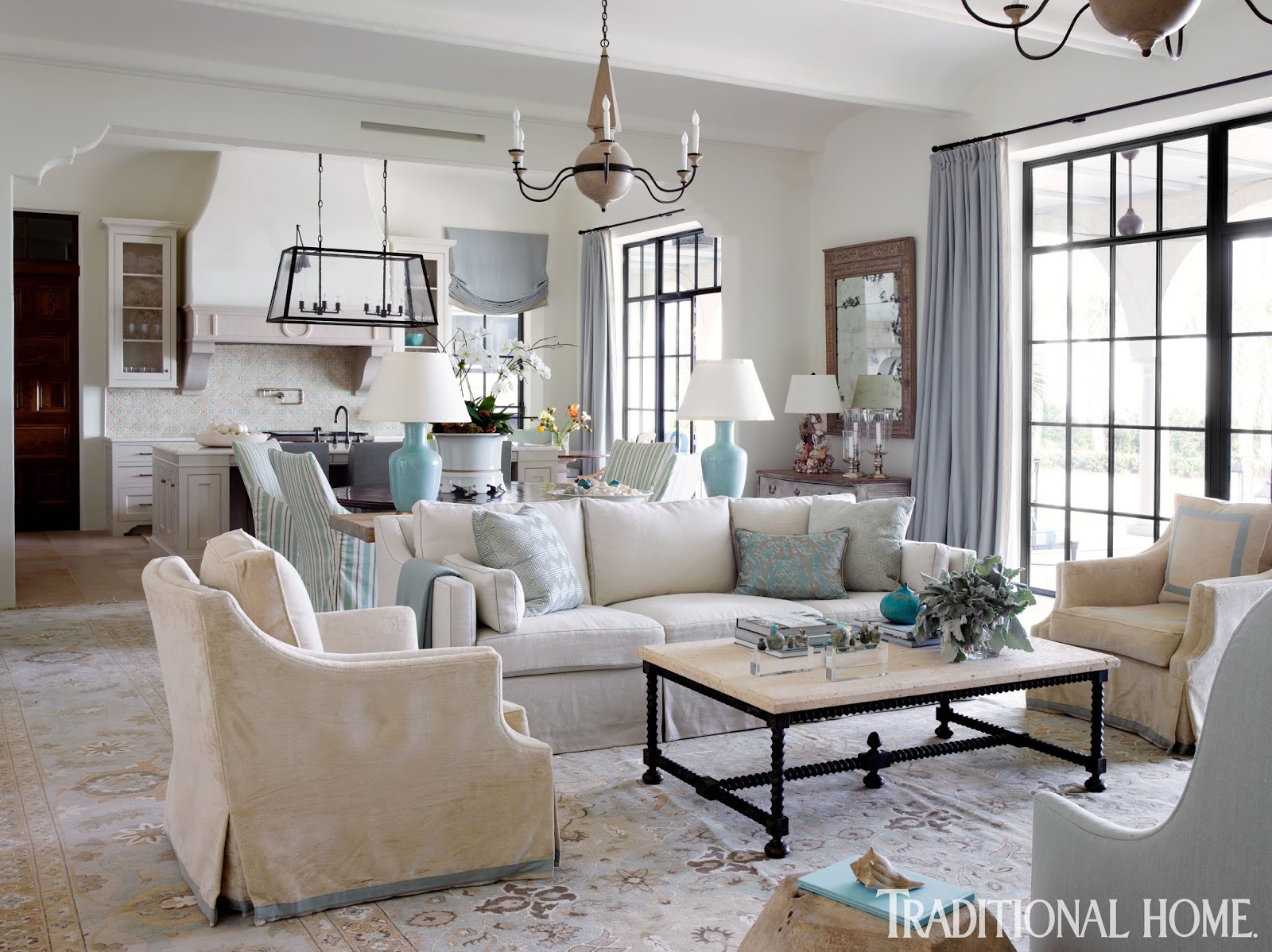 The light blue moment in the foyer serves as a teaser for the grand, open-plan living and kitchen areas. Here, sea-referencing aqua swells to become a full partner in the palette rather than merely an accent.
A massive rug with traditional floral motifs softens the limestone floor and anchors a seating arrangement of -linen velvet upholstery—and a casual dining vignette with ticking stripe chairs circling the table. 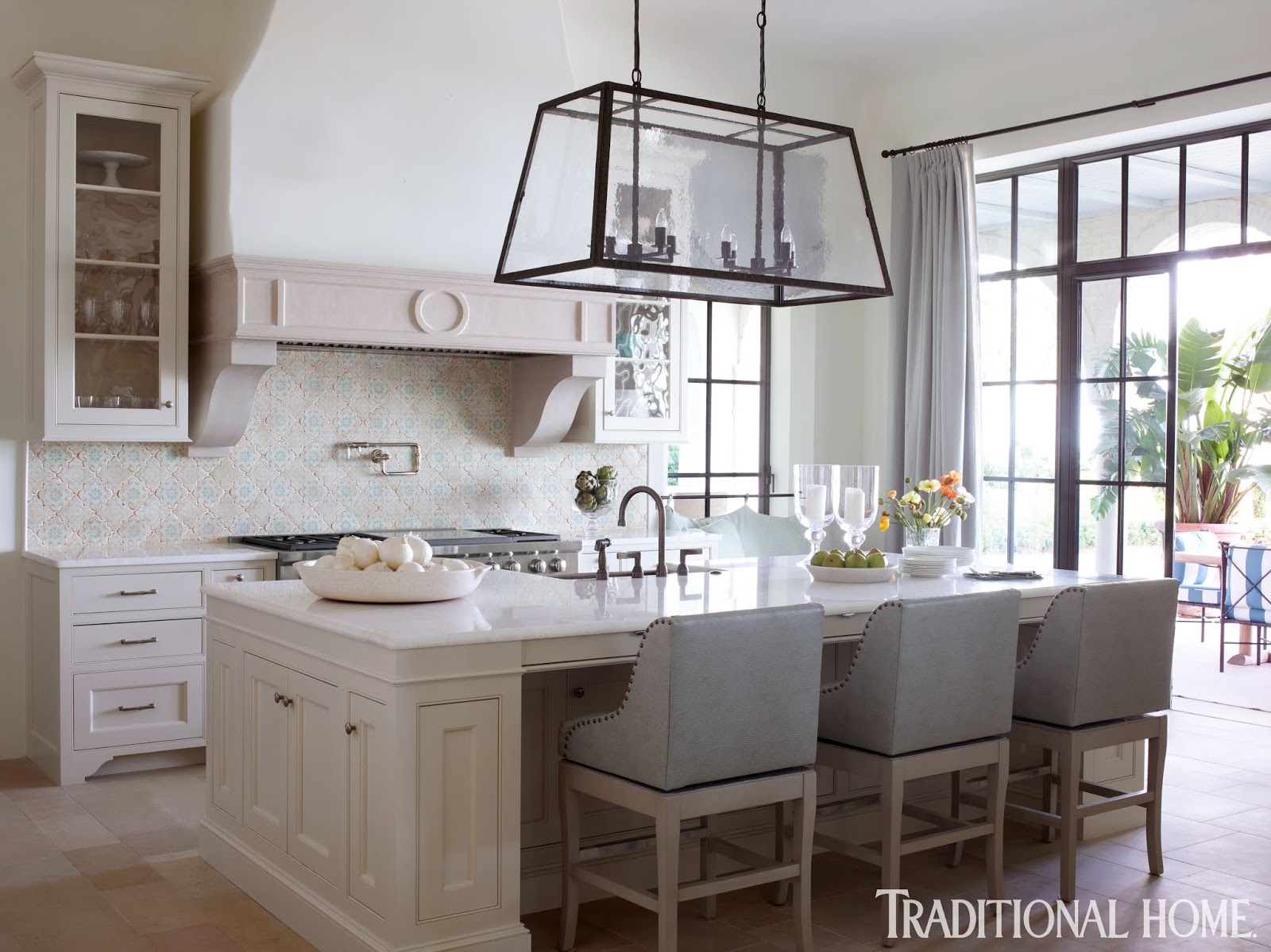 The aqua color happily spills into the kitchen on a tile backsplash, one of many tile moments throughout the house. “The clients love tile, and because we wanted the house to feel historic, we used it strategically as they would have when Sea Island’s original houses were built,” Kasler says. 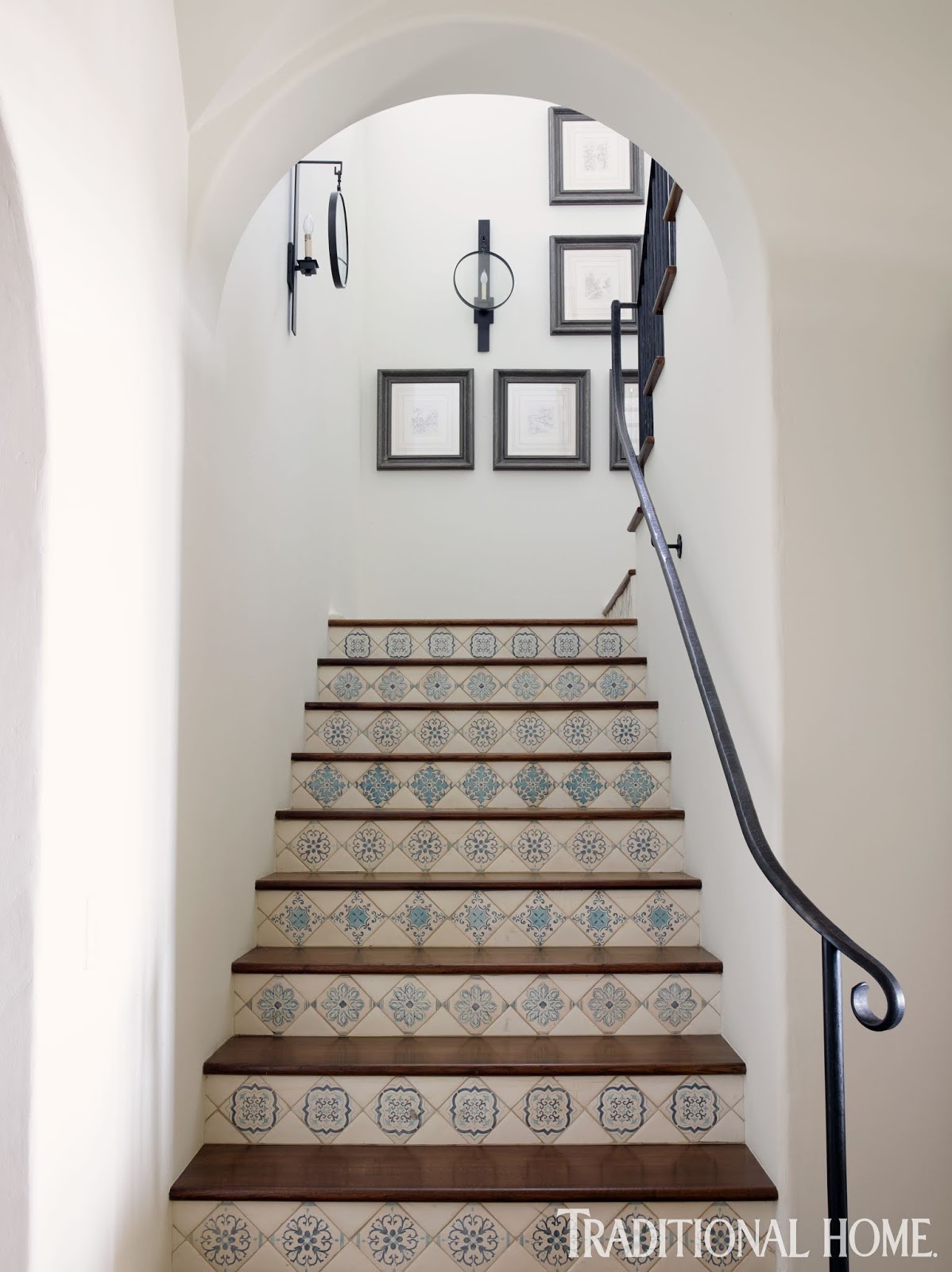 On the back staircase, tiles in coordinating blue patterns decorate the risers. 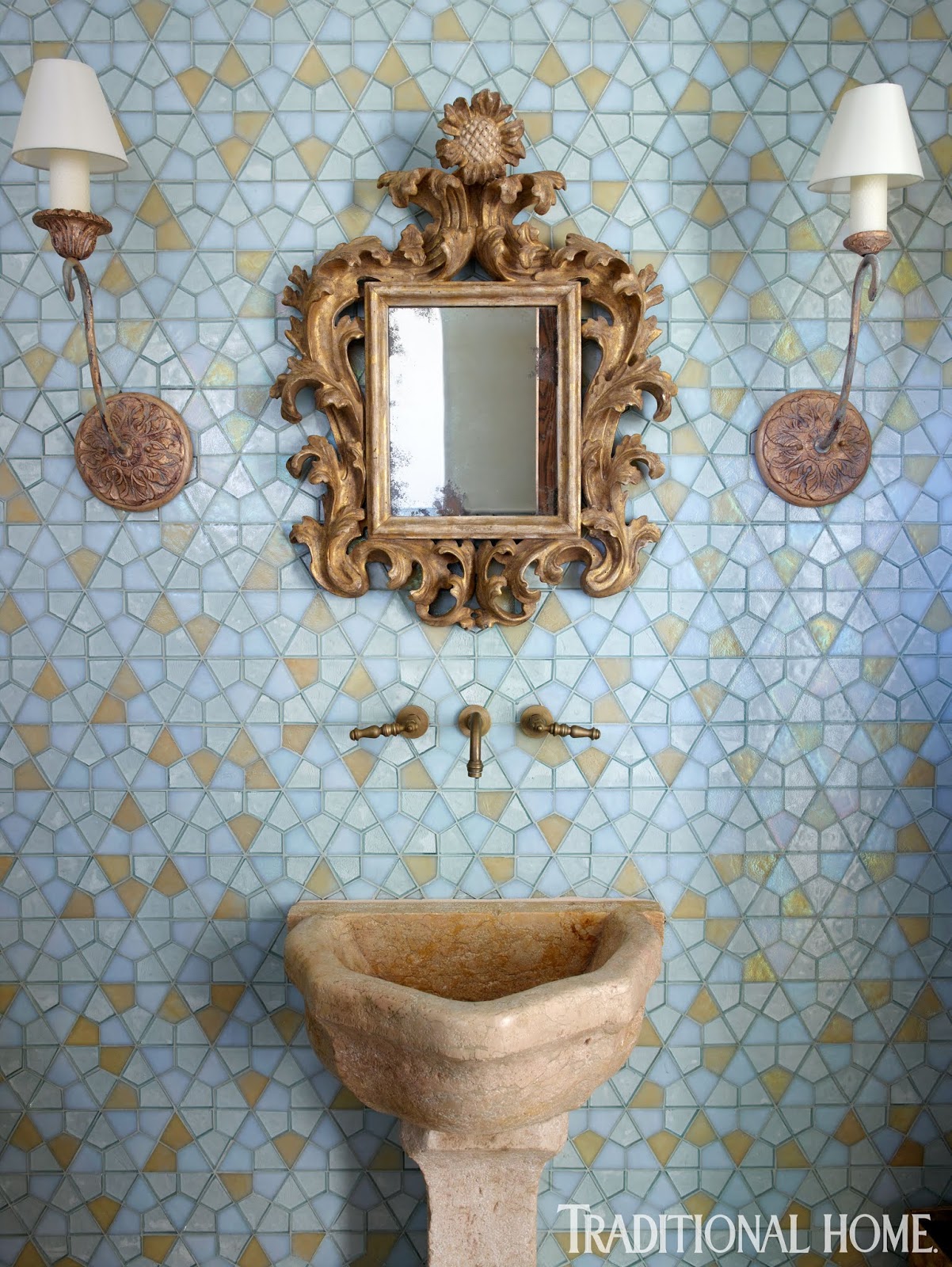 The home’s European style emphasizes shape with beamed ceilings and arches but forgoes details such as base and crown molding, which it doesn’t need to feel complete. 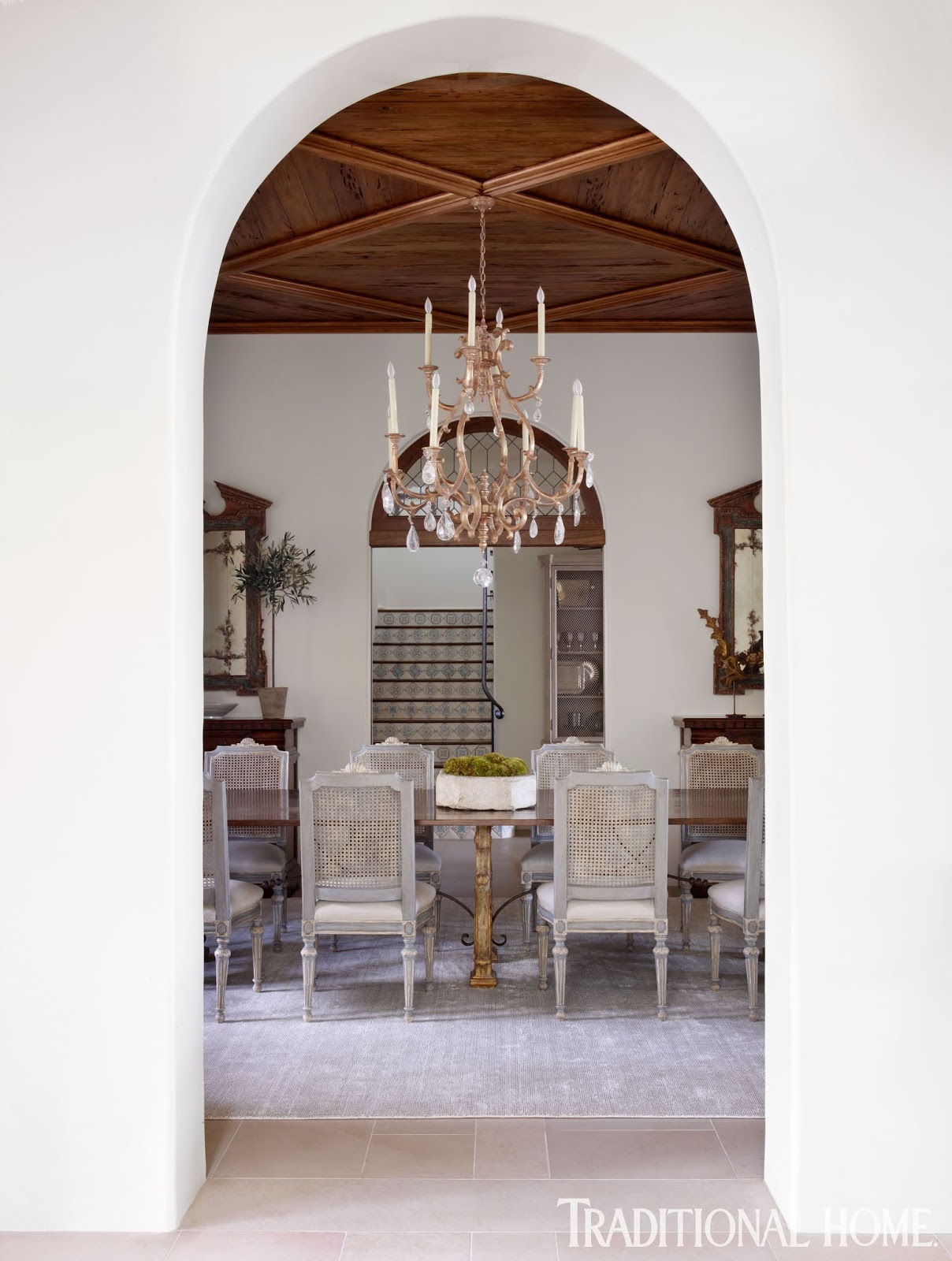 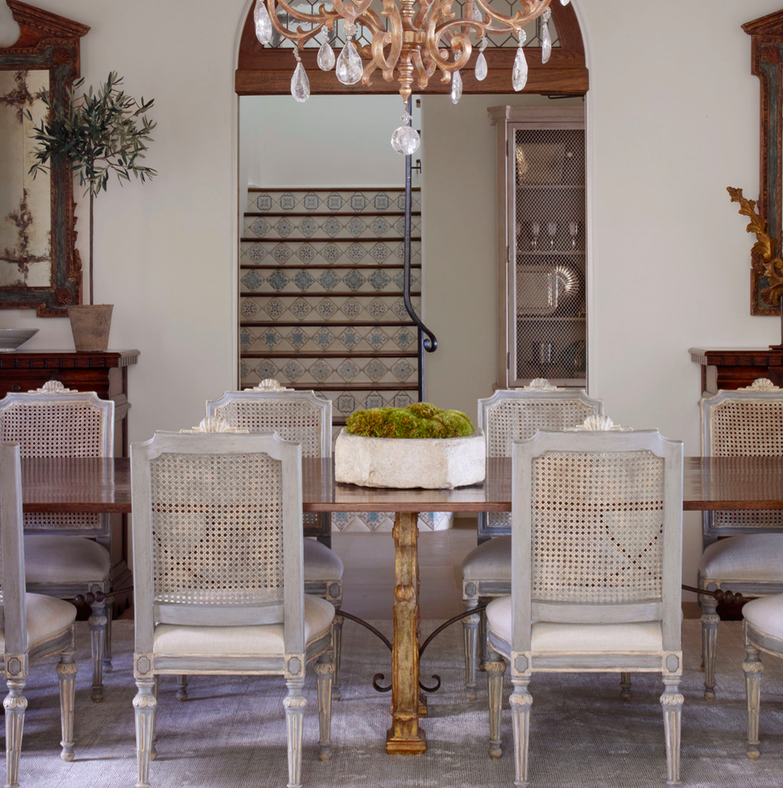 A crystal-and-gilded chandelier elegantly hangs over a Spanish-style table from Formations and cane chairs from Dennis & Leen. 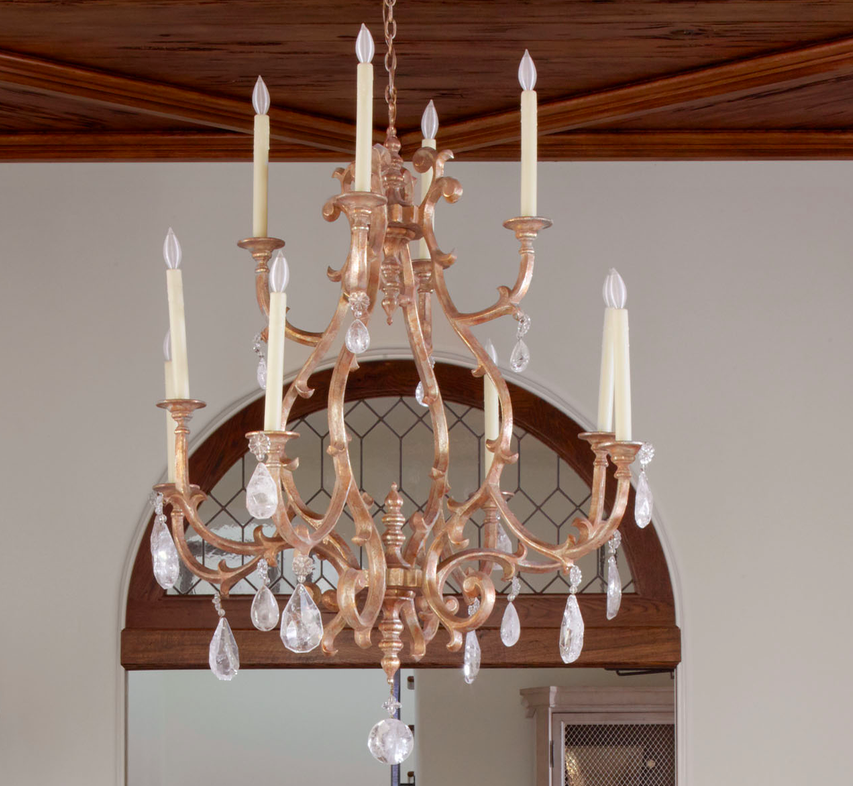 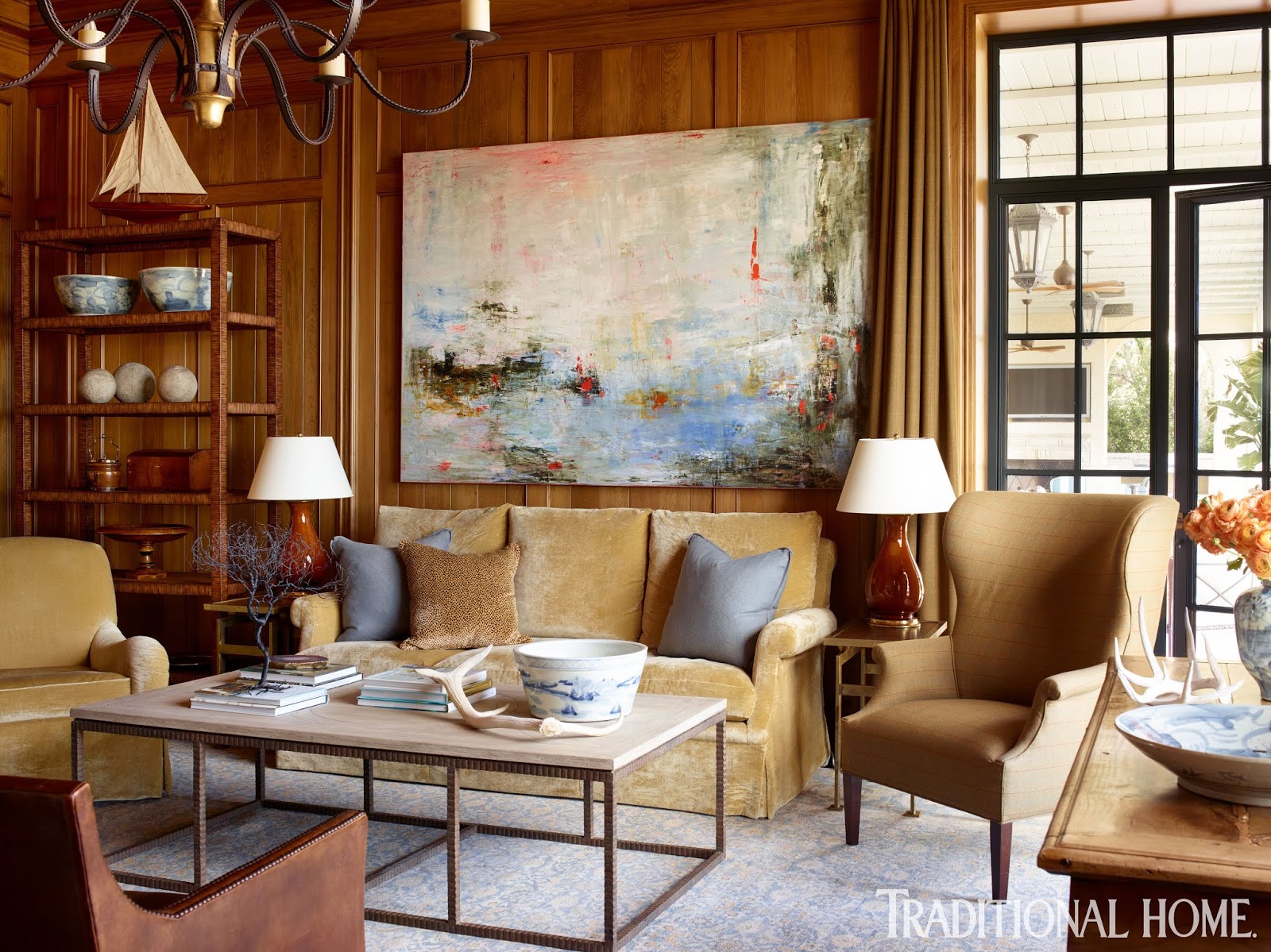 The relaxed atmosphere lets the homeowners unwind to beachy views as they keep easy, tranquil living top of mind—in a house that’s so much more than a vacation spot. 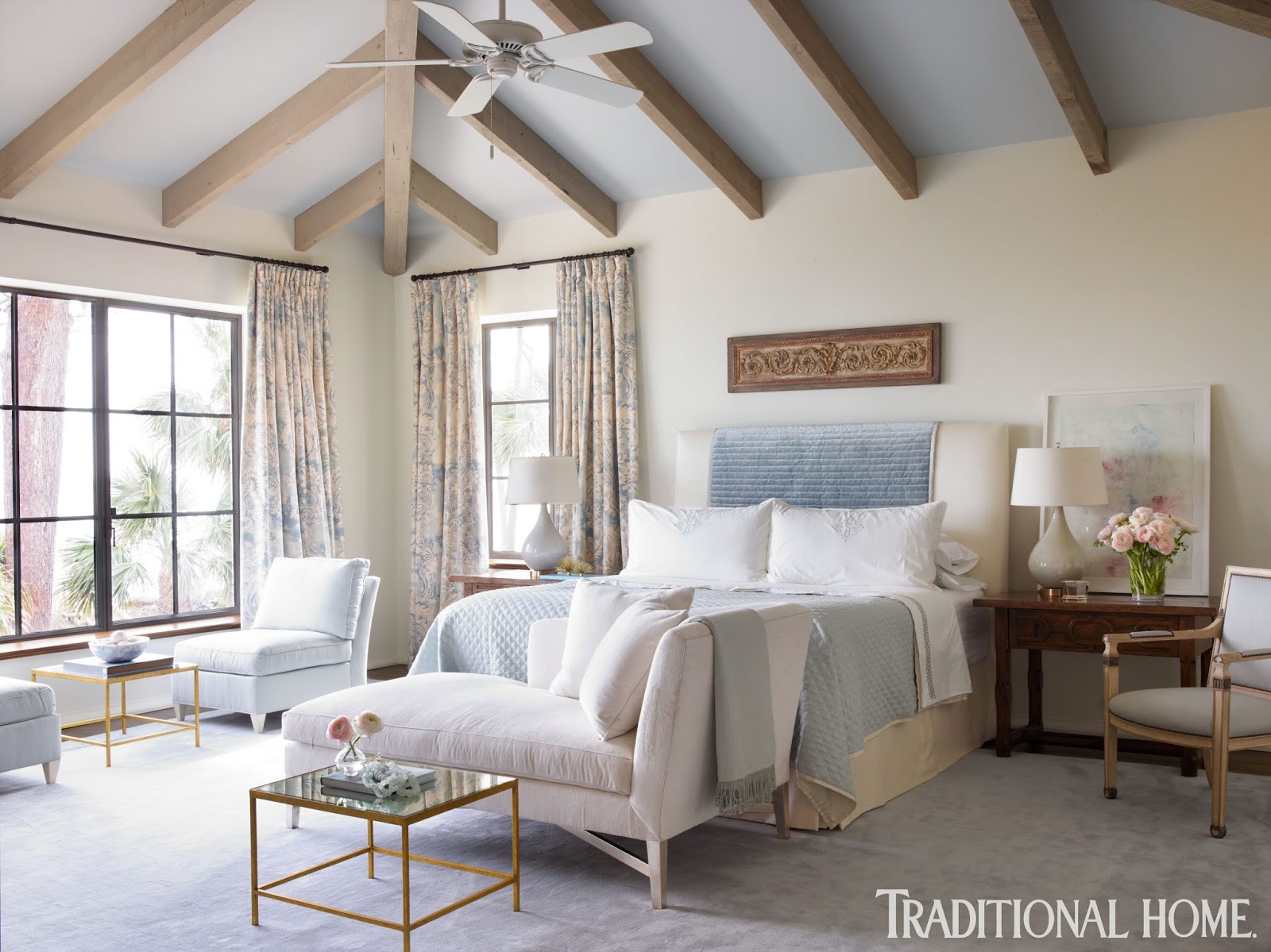 “Houses on Sea Island allude to a lifestyle more than a weekend situation,” Kasler says. “Designing this home to be sophisticated and simple through editing makes it livable for every day.” 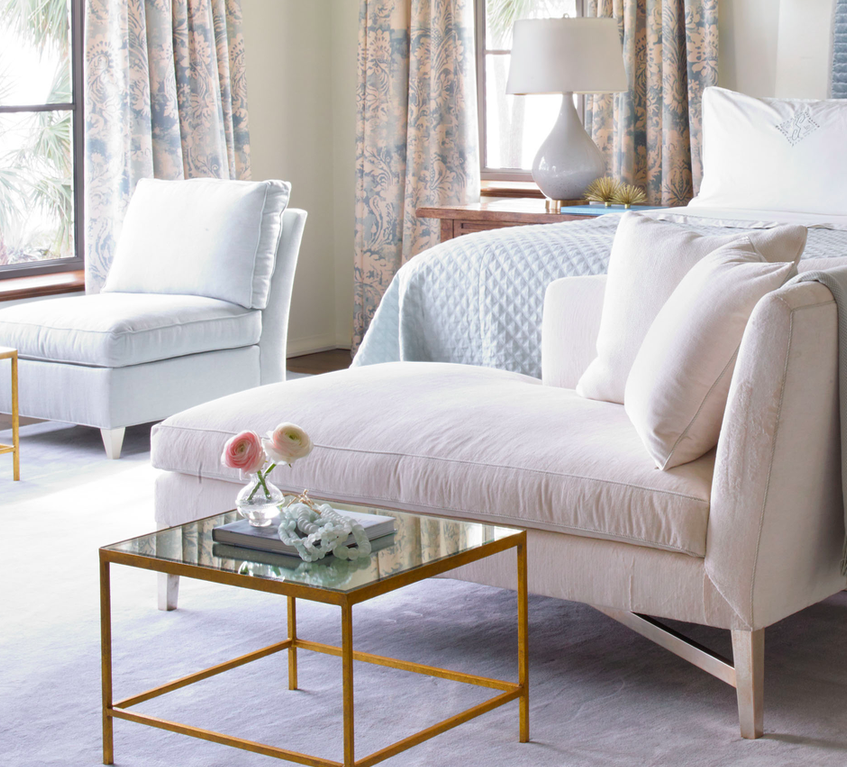 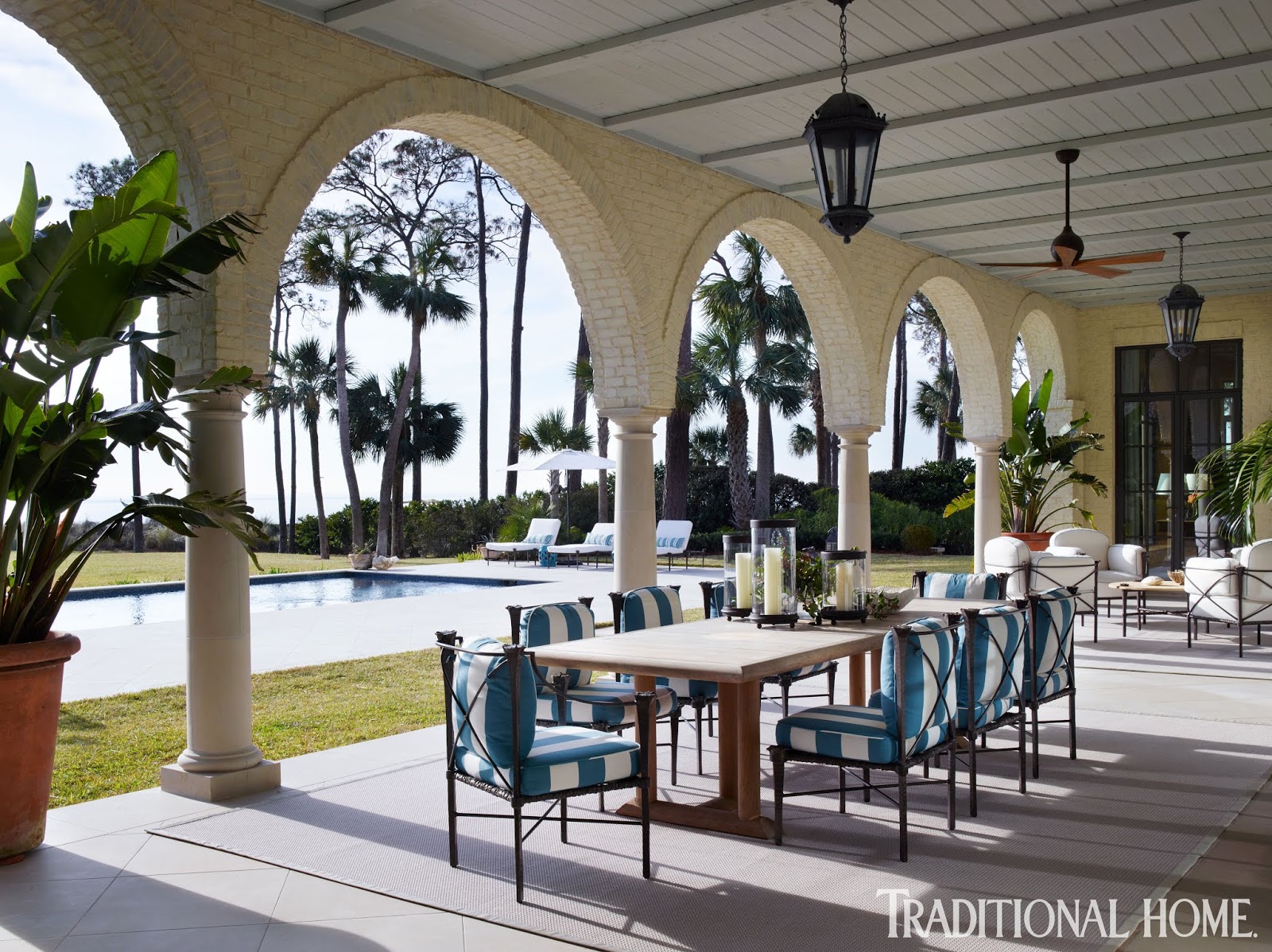