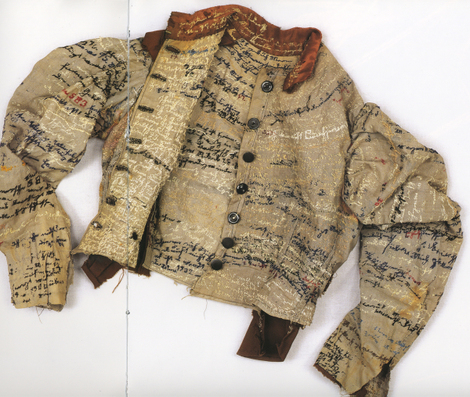 I’m very excited today to share with you some of the work of Textile Artist: Rosalind Wyatt. 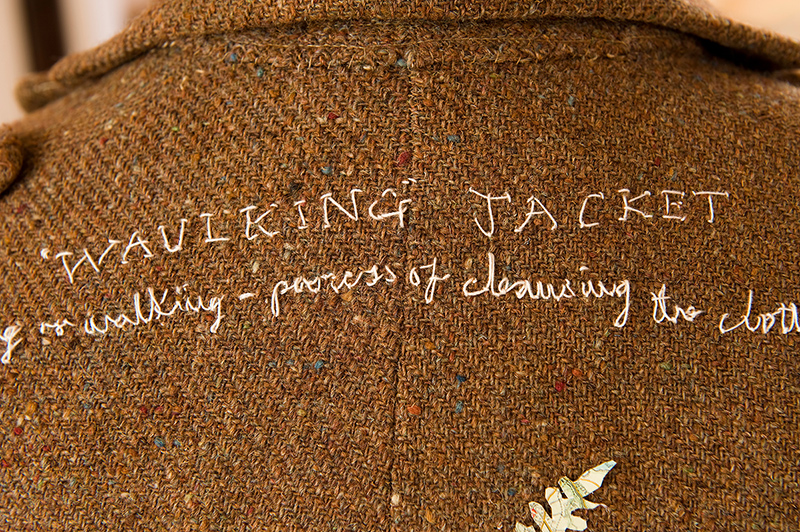 Her work is fabulous, creative and well simply wonderful. 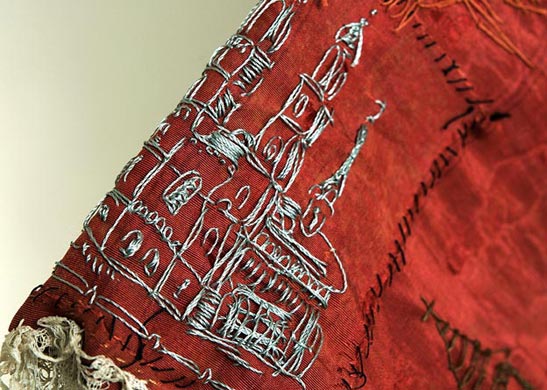 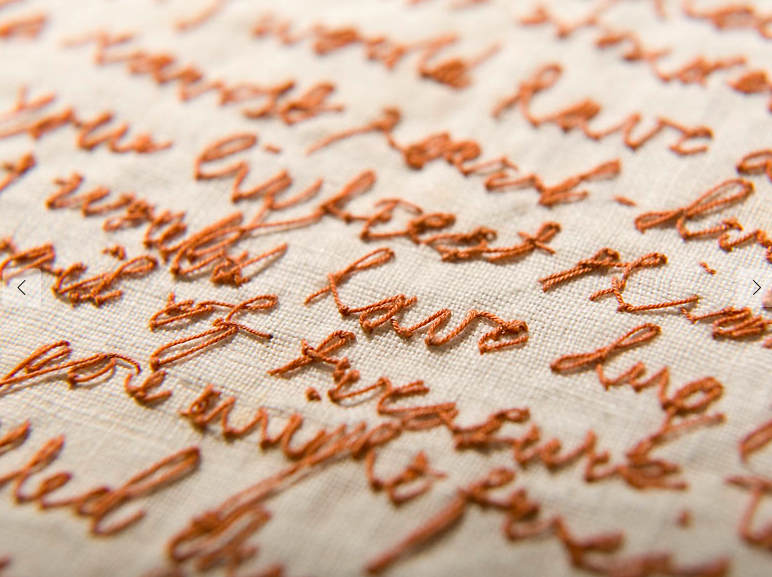 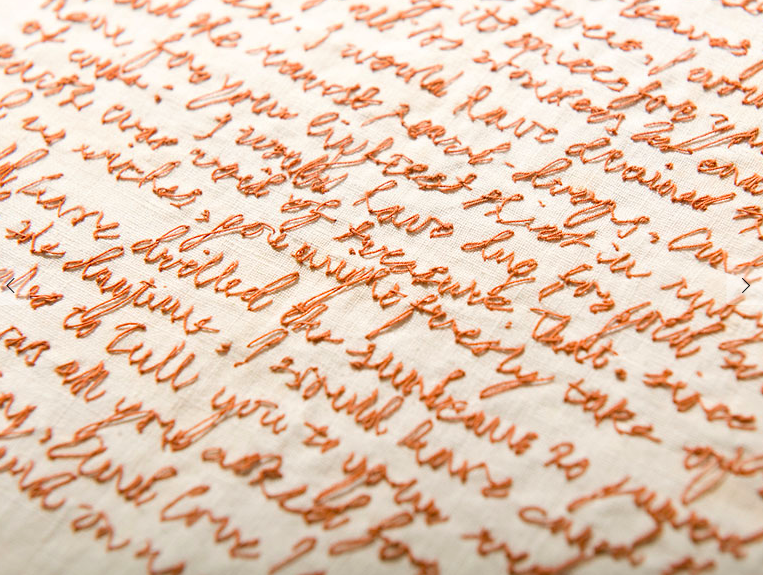 I would have torn the stars from the heavens for your necklace.
I would have stripped the rose-leaves for your couch from all the trees.
I would have spoiled the East of its spices for your perfume,
the West of all its wonders to endower you with these.
I would have drained the oceans, to find the rarest pearl-drops.
And melt them for your lightest thirst in ruby draughts of wine.
I would have dug for gold till the East was void of treasure, that, since you had no riches, you might freely take of mine.
I would have drilled the sun-beams to guide you through the day-time.
I would have caged the nightingales to lull you to your rest:
but love was all you asked for, in waking and in sleeping, and love I gave you, sweetheart, at my side and on my breast.
Lord Curzon – Viceroy of India to his wife

(from the original Sanskrit/Indian love song) 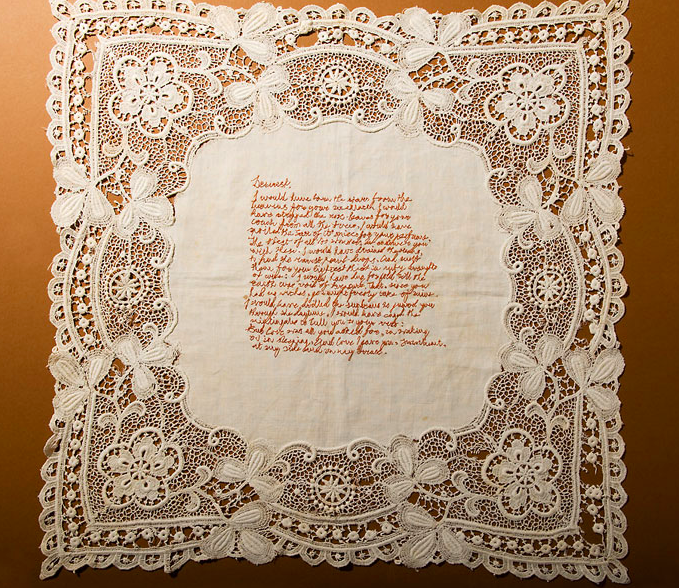 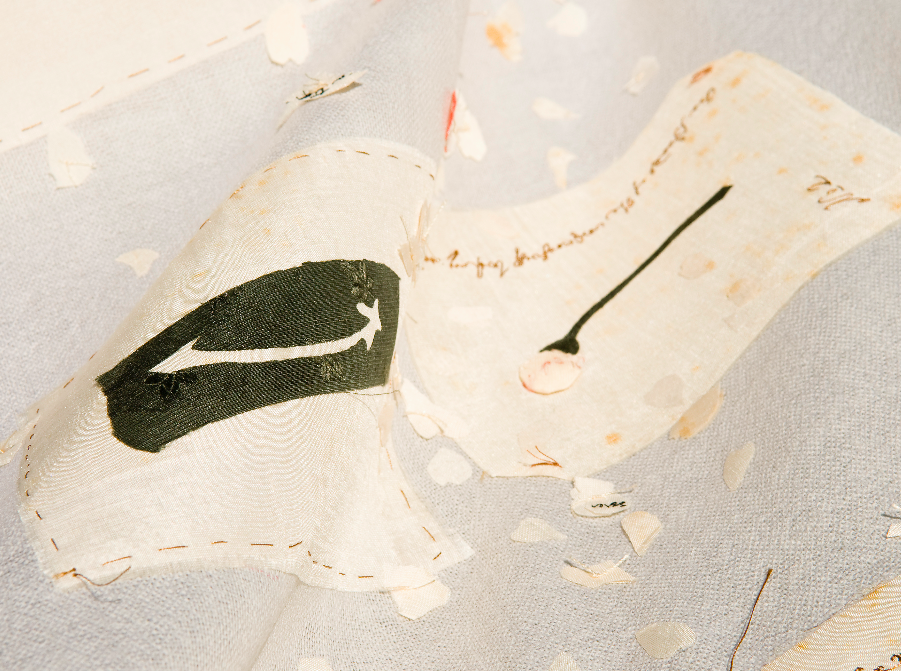 This commission commemorates a significant 25th wedding anniversary – a surprise gift from husband to wife. The client provided the text chosen from Anais Ninn “ And the day came when the risk to remain tight in a bud was more painful than the risk it took to blossom”. 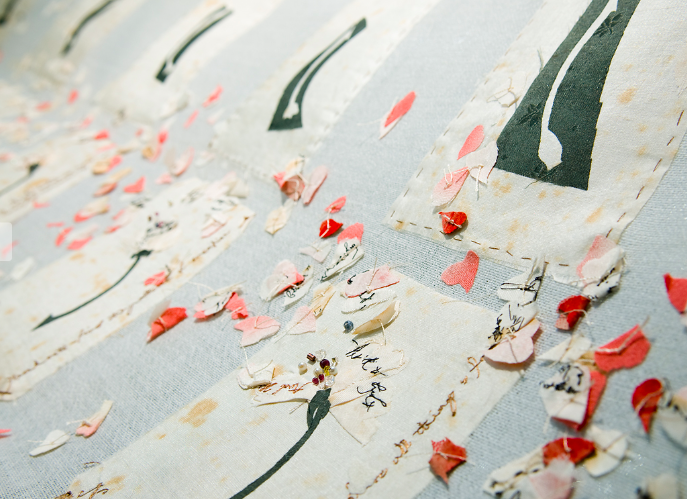 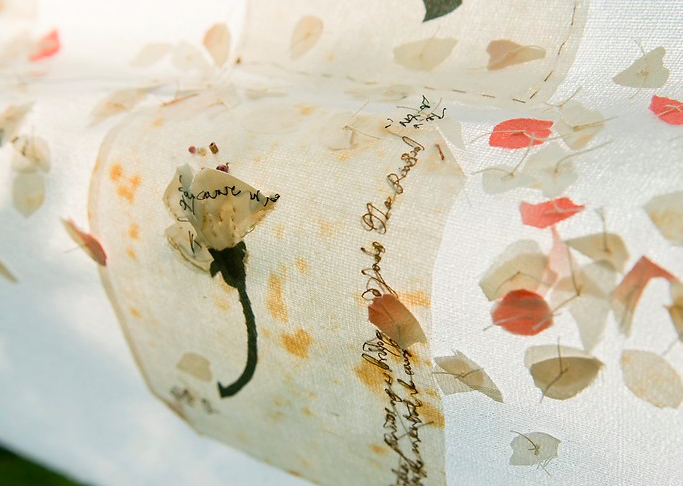 The silk used for the flowers comes from an antique kimono and a green silk Victorian Quaker wedding dress. 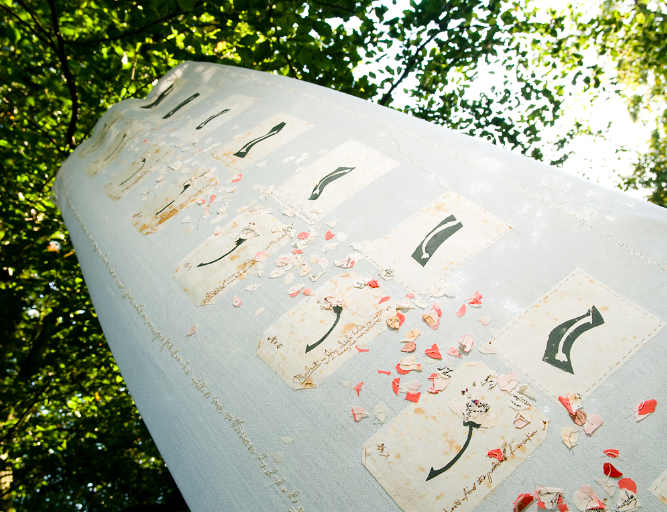 As each bud opens it reveals pearls and gems of garnet and quartz and scattered along the length of the pashmina, hand cut and stitched ‘petals’ reminiscent of the couple being blessed as seen in Indian miniature paintings…where the petals fall from hands from the sky.
‘I Wish I Were With You’ Commission for Fortnum & Mason 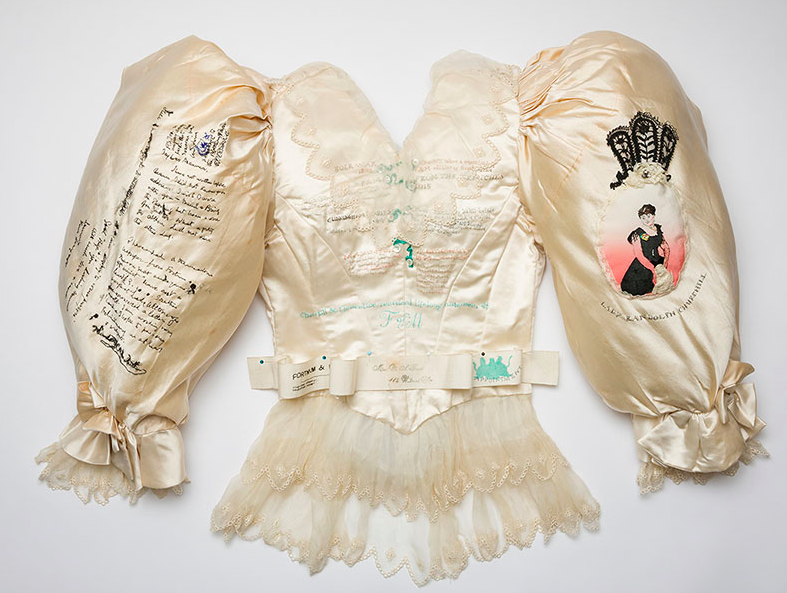 How do you tell the story of Britain’s greatest leader and where he loved to shop? The first inspiration for this artwork was a letter written by a 16 year old Winston from Harrow School to his Mother, ‘Jennie’ Churchill, telling her that he had received ‘a tremendous hamper from F&M’ which ‘must have cost at least £3 and 10 shillings’. Covered in ink blots and smudges he apologises saying ‘I am so awfully sorry for the blots, but someone has been doing something to the blotting paper’ before signing off affectionately yet with custom formality ‘Good Bye you darling Mummy, with much love and many kisses, I remain your loving son Winston S. Churchill’. This has been hand stitched onto the left sleeve and is where the story begins. 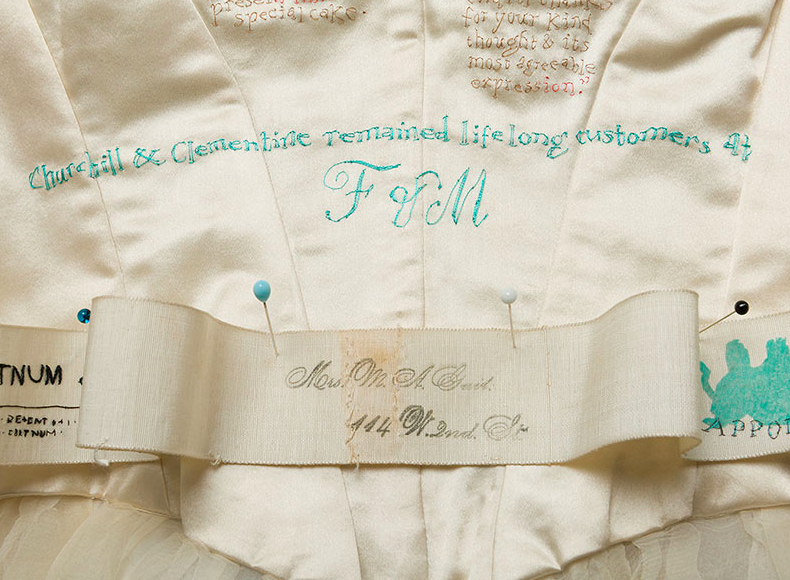 Lady Randolph Churchill was an American heiress (1854 – 1921) considered to be one of the most beautiful women of her time. This silk satin bodice becomes the canvas on which to tell this tale and is fittingly exquisite; complete with whale boning, it belongs to the same era of elegance and is by coincidence of American origin – as shown printed on the label which has been pinned decoratively with antique glass top pins which themselves have individually been silver plated. 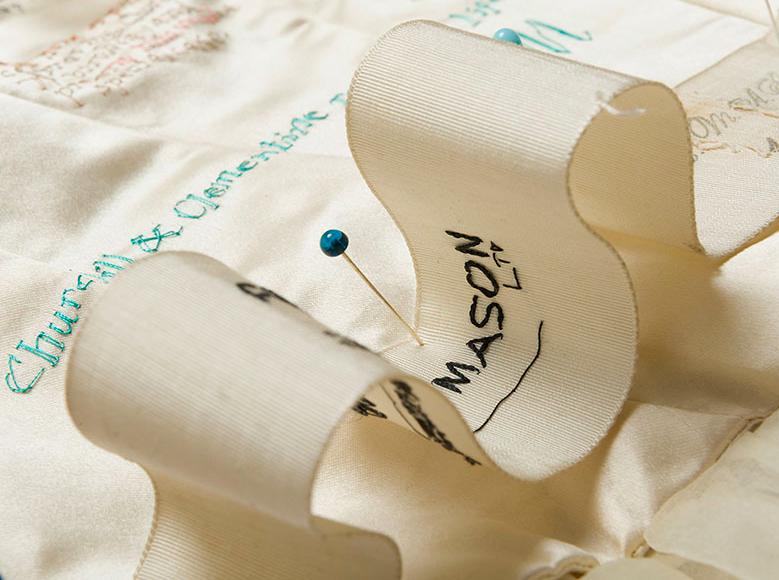 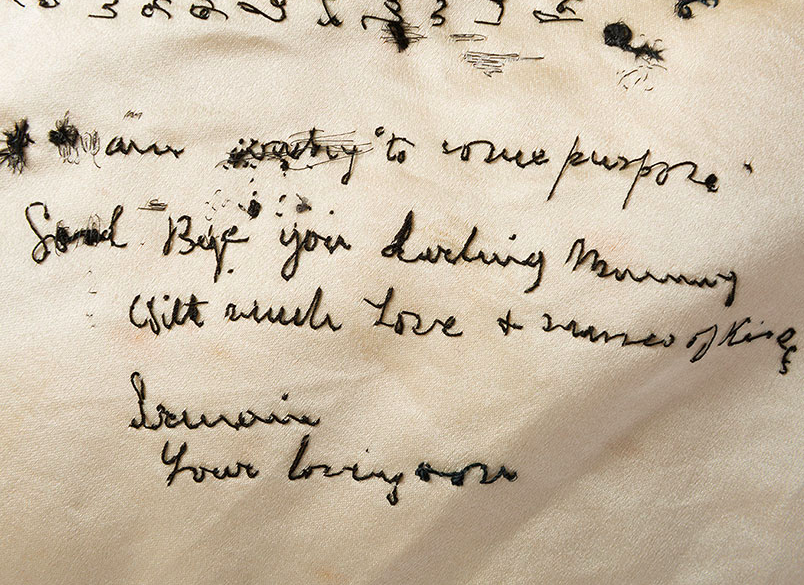 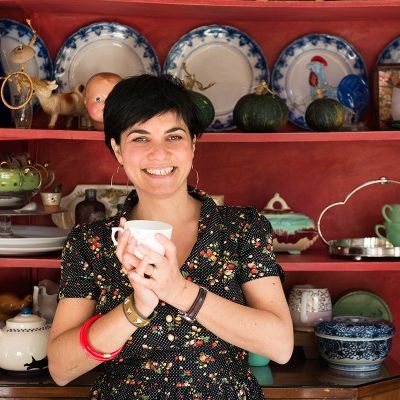 Rosalind Wyatt:
I am a British artist, (and Londoner) working from my studio in West London.
My work is about words – the sound of them, the feel of them…
I tell ordinary stories about people in extraordinary ways. For instance, ‘Writing with a needle’ I hand stitch their handwriting on one of their garments or one of their ancestor’s and a story comes to life.
I work mainly to commission and have collaborated with major brands to tell their story. 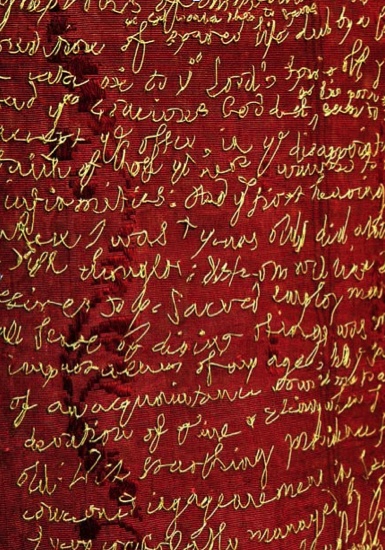 Every story has at its heart a person an essential truth waiting to be told. That’s what appeals to me as an artist, what connects us all as human-beings.
A narrative stitched in your own handwriting is as unique as your DNA, – for me, it’s as real as your personal voice. So text and textile come together and a story lives for all time.
My national historic project : ‘The Stitch Lives of London’ is like a modern-day Bayeux Tapestry where clothes, artefacts and garments, donated by Londoners are transformed into art works; a social commentary of who we are now, today in London.
‘If shoes could talk’ 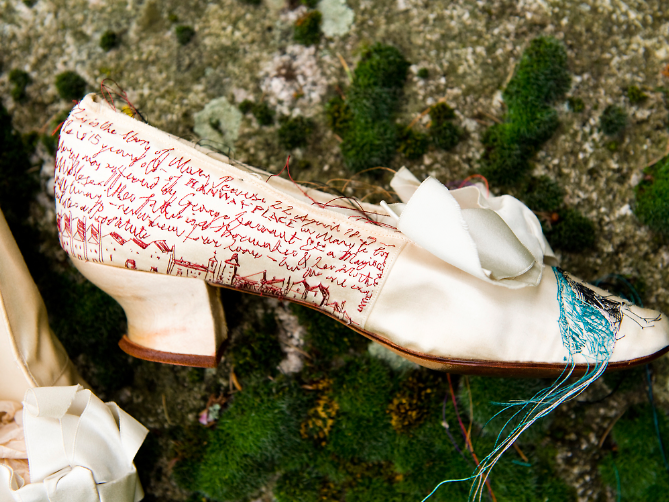 These silk satin dancing shoes were the first garment donated by a London family to The Stitch Lives of London. The story of Mary Pearse, a London pauper who never owned a pair of shoes but whose father may have made such a pair has been hand stitched on them. All we know of Mary is contained within this short narrative, written by the clerk as she was admitted to a safe house: 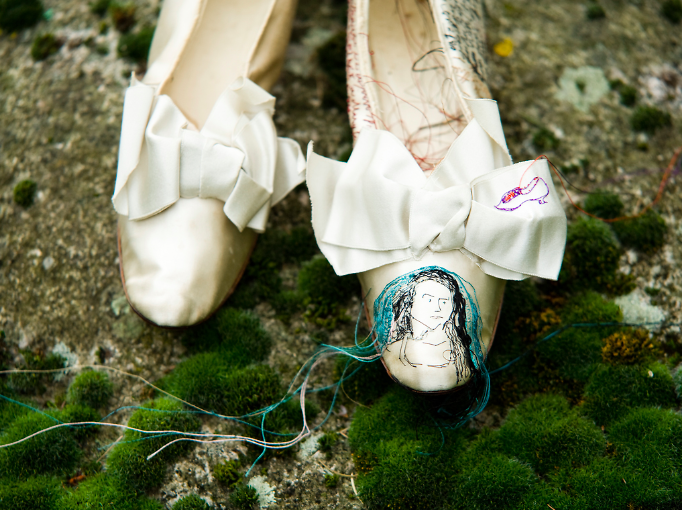 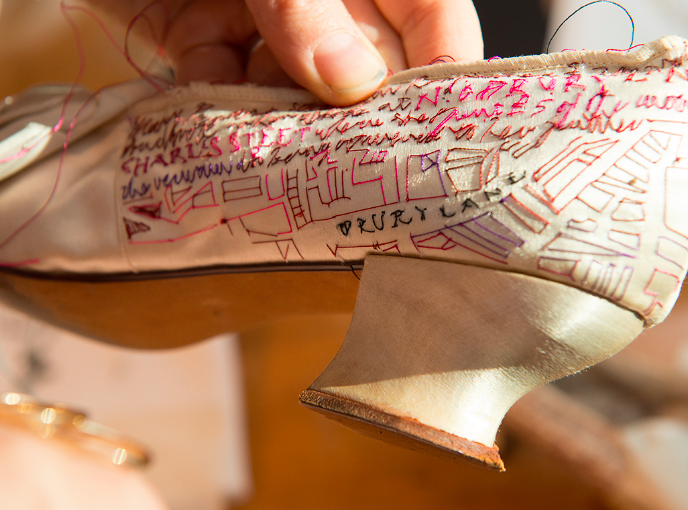 Mary Pearse ~ 15 years old ~ of Hanway Place (yard) Mary le bone, was referred to the consideration of the last committee by George Farrant Esq, a Magistrate of Middlesex. Not being at that time discharged from confinement, her case could not be investigated. 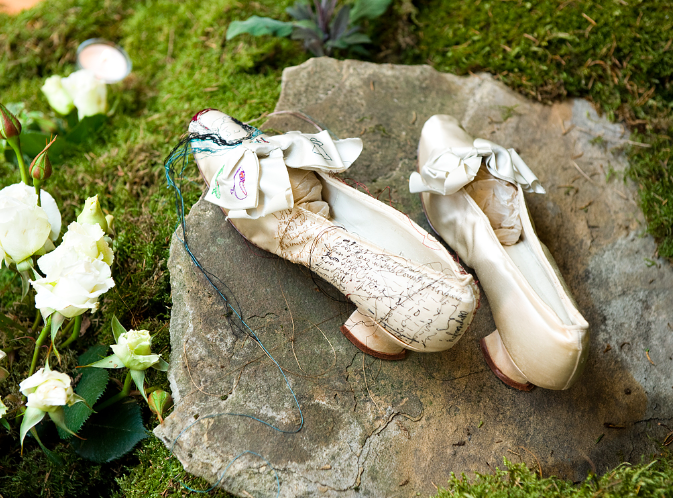 She now states, that her Father is a shoemaker – & that her mother is living ~ that she has never been from home, till the evil example of a Sister, who has been a Prostitute some time, led her to think of quitting her Parents. She stole from her Father £7 ~ & took up her abode at No. 6 Charles street, Drury Lane, where she spent £5 ~ of the money, the remainder being recovered by her Father.
Admitted.”
Bill Nighy Recording
‘Because It’s There’ Commission for Fortnum & Mason 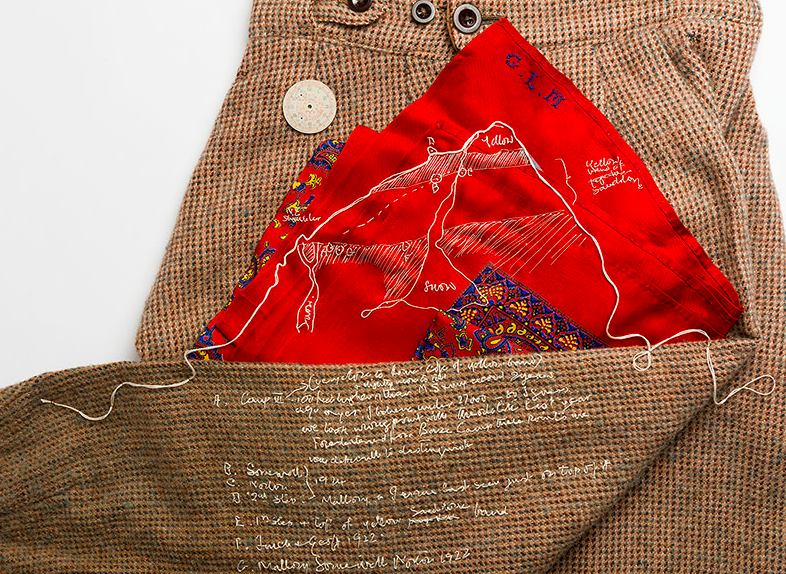 This stitched garment explores the history of Fortnum and Mason and the 1924 Expedition to Everest. 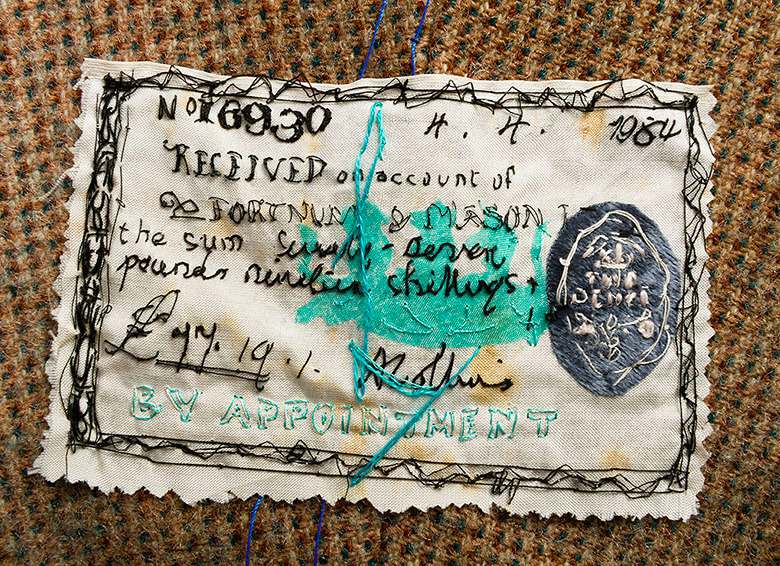 The 1924 expedition to conquer Everest was the third and last fatal attempt for George Mallory(1886 – 1924). In an age of idealistic British conquest and travel, Fortnum and Mason provided everything the intrepid explorer might need at its Export department. It is little wonder then that the 1924 Mount Everest Expedition headed to Fortnum’s. 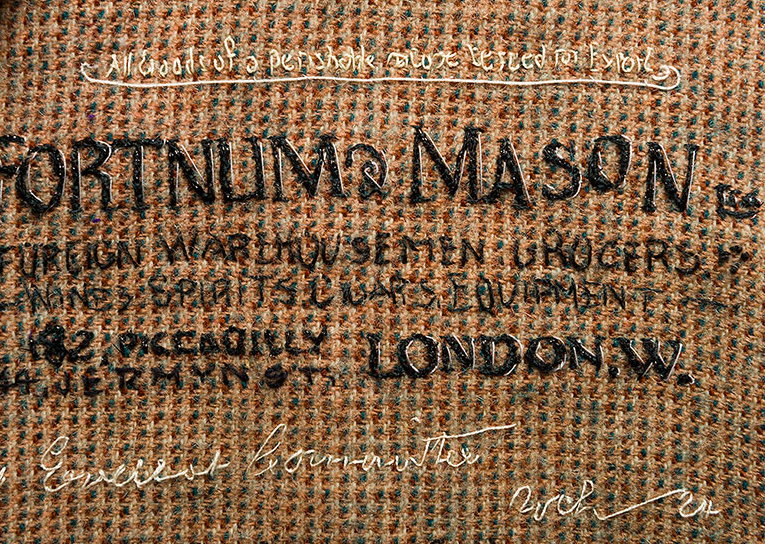 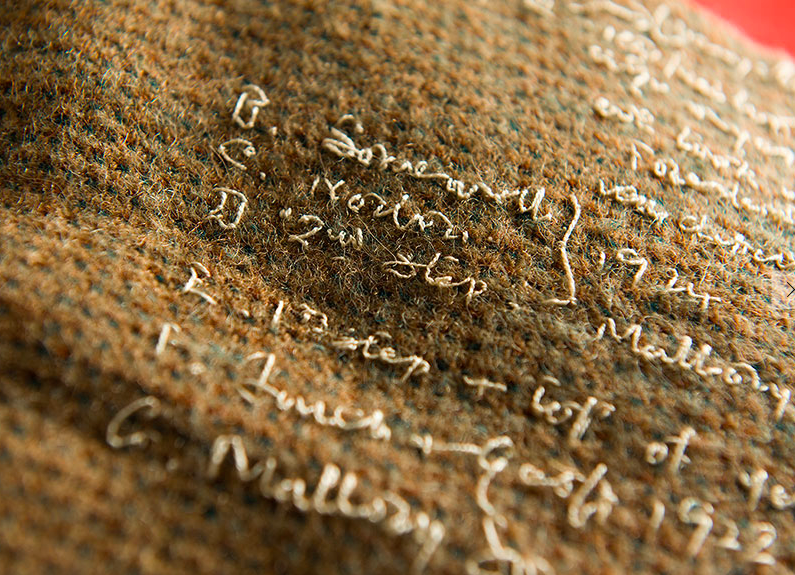 To see more of her work you can visit her site here:
Rosalind Wyatt