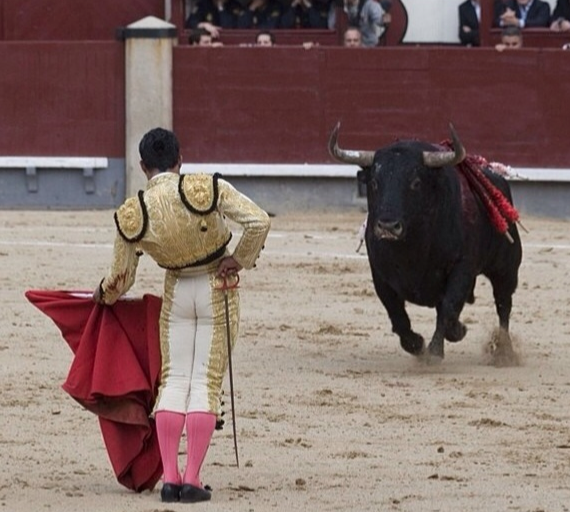 Bullfighting , also known as tauromachia or tauromachy , is a traditional spectacle of Spain, Portugal, southern France and some Latin American countries in which one or more bulls are fought in a bullring.

Although a blood sport, by definition, some followers of the spectacle prefer to view it as a ‘fine art’ and not a sport, as there are no elements of competition in the proceedings. The bullfight, as it is practiced today, involves professional toreros (of whom the most senior, who actually kills the bull, is called a matador) who execute various formal moves which have a meaning, or at least a name, according to the bullfighter’s style or school. It has been alleged that toreros seek to elicit inspiration and art from their work and an emotional connection with the crowd transmitted through the bull.

The close proximity places the bullfighter at some risk of being gored or trampled by the weakened bull.

After the bull has been hooked multiple times behind the shoulder by other matadors in the arena, the bullfight usually concludes with the killing of the bull by a single sword thrust, which is called the estocada.

In Portugal, the finale consists of a tradition called the pega, where men (forcados) try to grab and hold the bull by its horns when it runs at them. Photo by Peter Müller: After a close call: César Rincón in his bullfight suit, Germany 2000