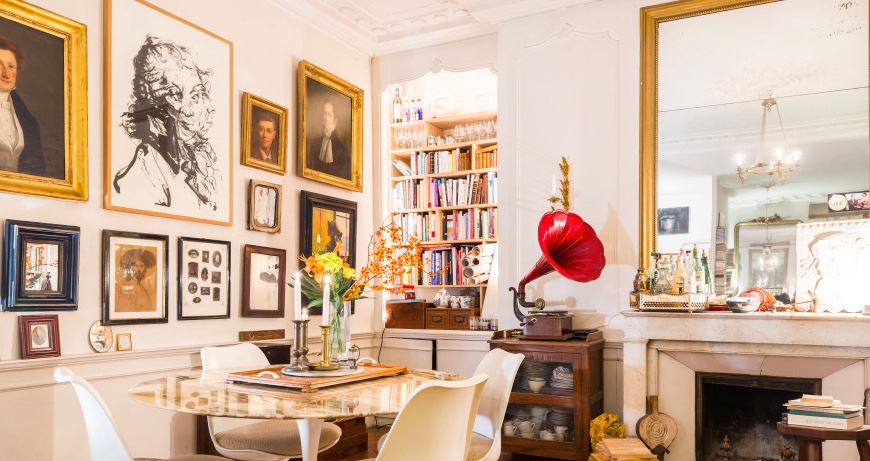 Gabriel and Oliver have rented the apartment in Marais district on the right bank of the Seine between the Place de la Bastille in the south and the Place de la République in the north for six years already. 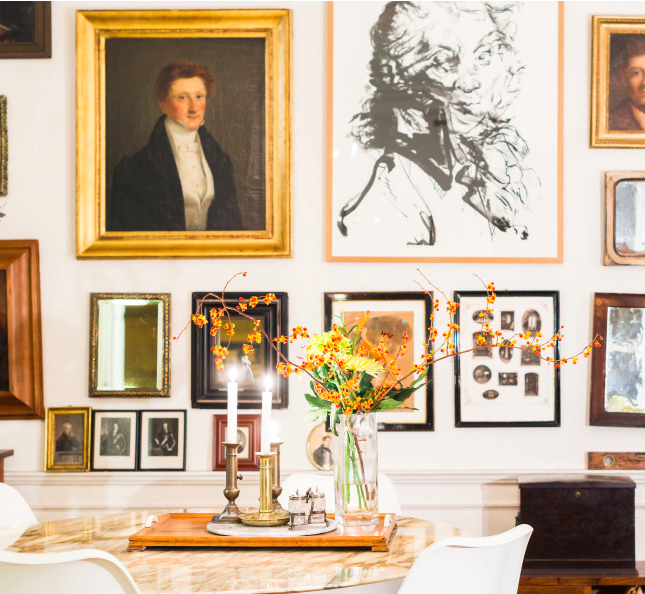 Marais district is one of few parts of the city which was not rebuilt in the XIX century. Mixed architecture of various epochs survived due to it. American expatriates call the north part of the district NoMa (North Marais), there are many advertising agency and creative agency offices, around which trendy coffee shops and bars, galleries, and new museums grow. 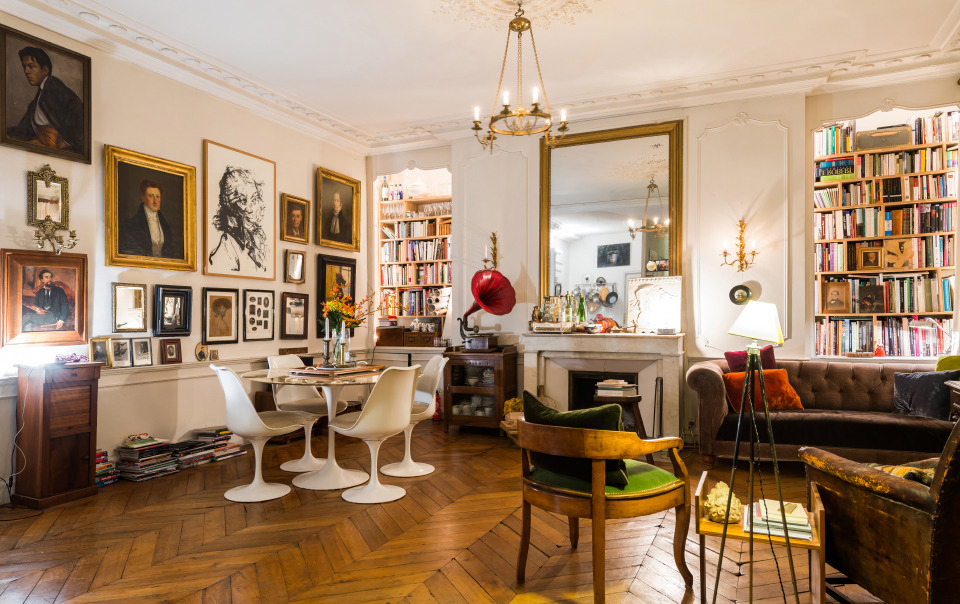 A wall between two rooms was broken down in the 80s to give the premise for office.

So a free space which Gabriel liked was made.

The tenants tried to zone the apartment: the bedroom, the living-room, the dining room, the kitchen, but nevertheless it feels like you are among decorations for a theatrical performance. 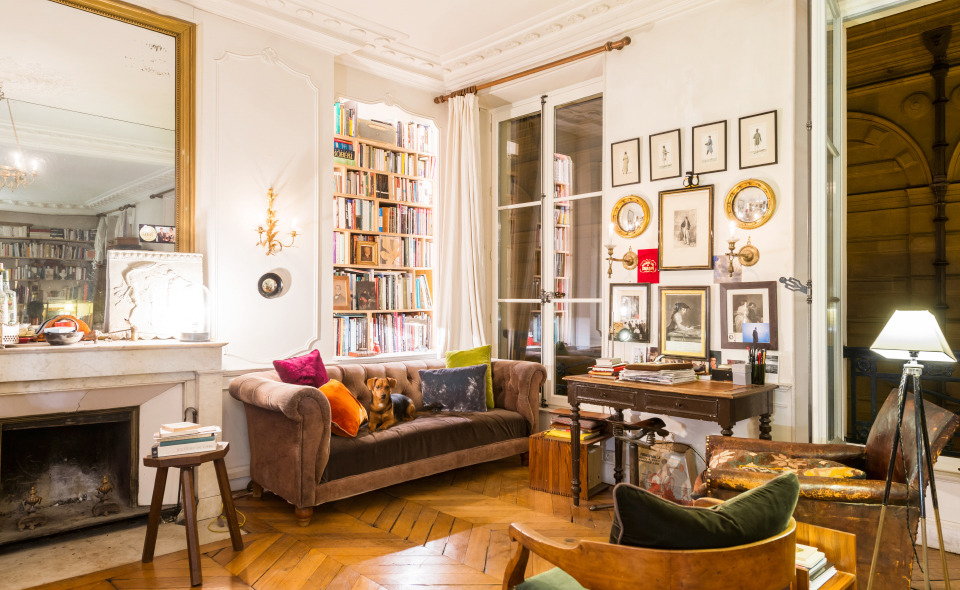 It was necessary to change and build again many things in the kitchen. Now there are all the things needed to cook supper with friends here. The owners made many things by themselves. 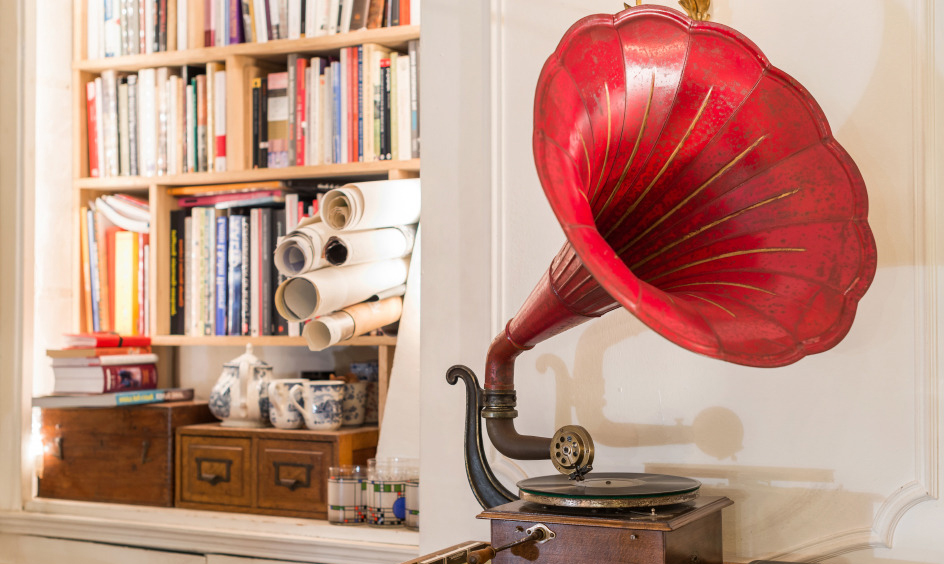 A worn out wooden parquet, four windows with French balconies, two fireplaces, and large mirrors in golden frames above them are among indispensable interior attributes of Paris apartments.

The only downside is that there is no central heating in the house (that is not uncommon in Paris).

A cold wind strikes through large windows in winter.

A fireplace saves in this case, however the guests are recommended not to put off warm clothes from December to April. 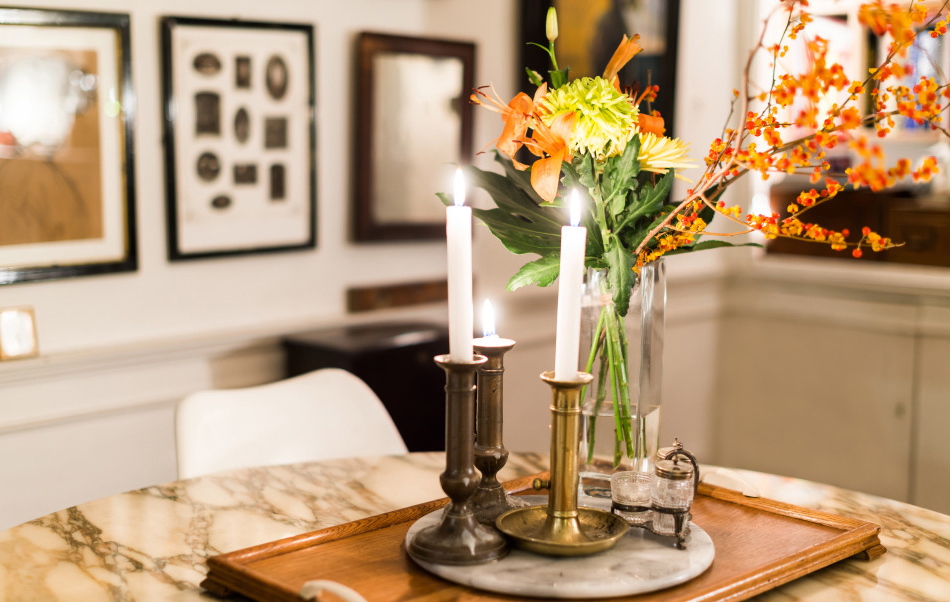 Some bits of furniture fell to the owners from Oliver’s parents.

For instance the table and chairs Eero Saarinen, and a classical English leather sofa Chesterfield were bought 30 years ago for the first common apartment.

A marble tabletop reflects light like a mirror, and lights a dark corner of the room in such a way. Usually tabletops of this model are of much colder metal shade, but this one is of alabaster-cream colour with bright streaks fitting in brown-beige colour scheme of the apartment. 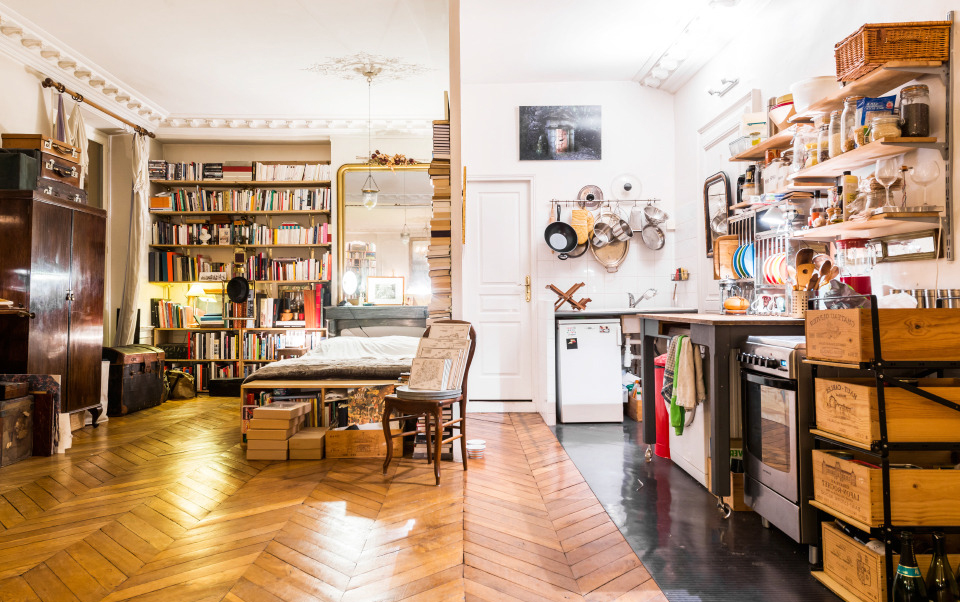 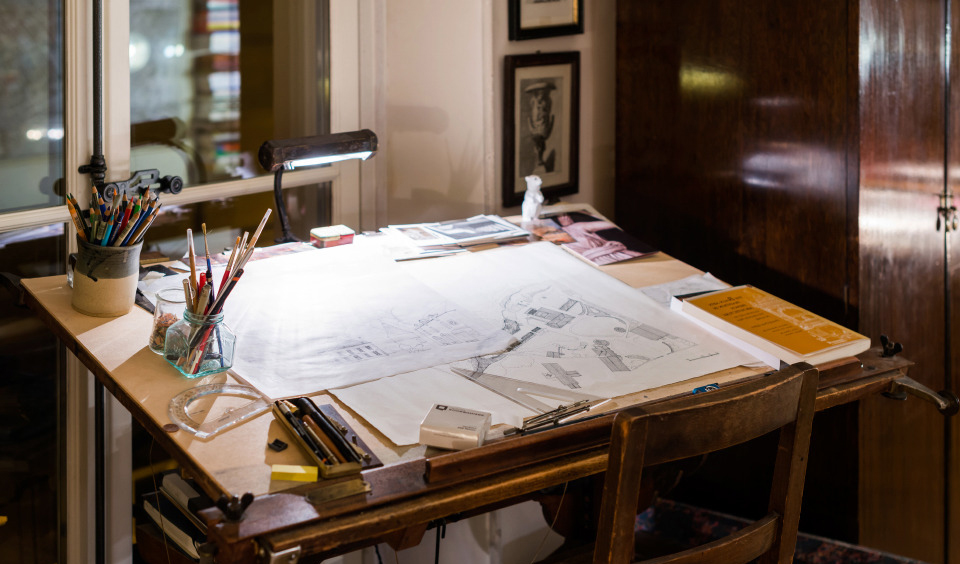 The couple bought the rest furniture in antique shops throughout Europe. For instance, a drawing table was found in Brussels. Many Parisians buy vintage furniture just in the capital of Belgium due to a huge variation in prices – one can order delivery to Paris from all storekeeps. It took a lot of effort for Gabriel to persuade Oliver to buy such a massive item, but in the end the table blended in between a conventional bedroom and living-room. 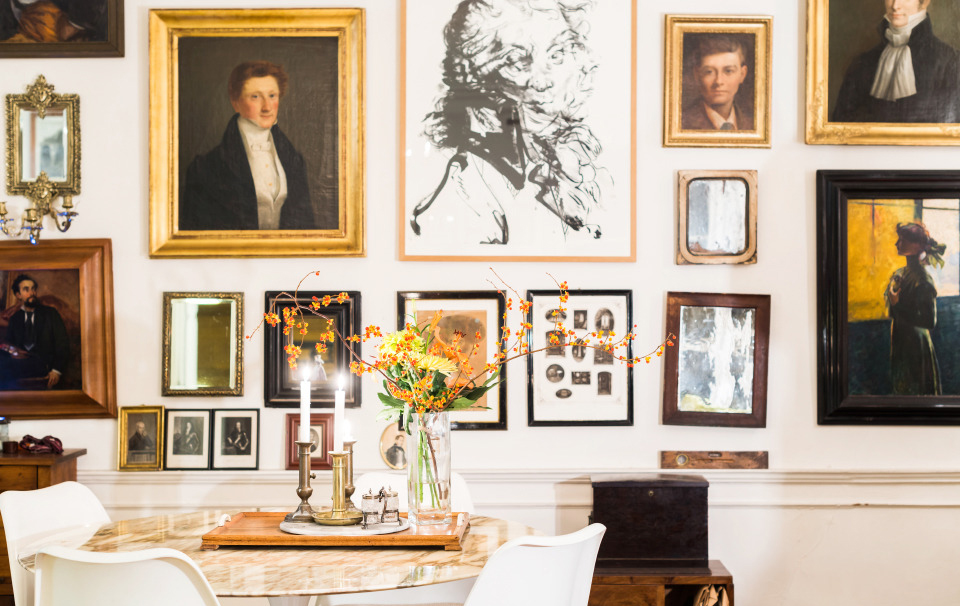 Gabriel’s parents were engaged in antique-trade for so long, that’s why their house was always full of antique painting, among which there were many portraits of various epochs.

Having moved to Paris their son began to collect portraits, and each of them has its name: “Poet”, “Artist”, “Lawyer”, and guests and the owners like to think out stories for characters.

For instance, the “Poet” is in love with “Hedda”, that’s why they hang on the wall next to each other. 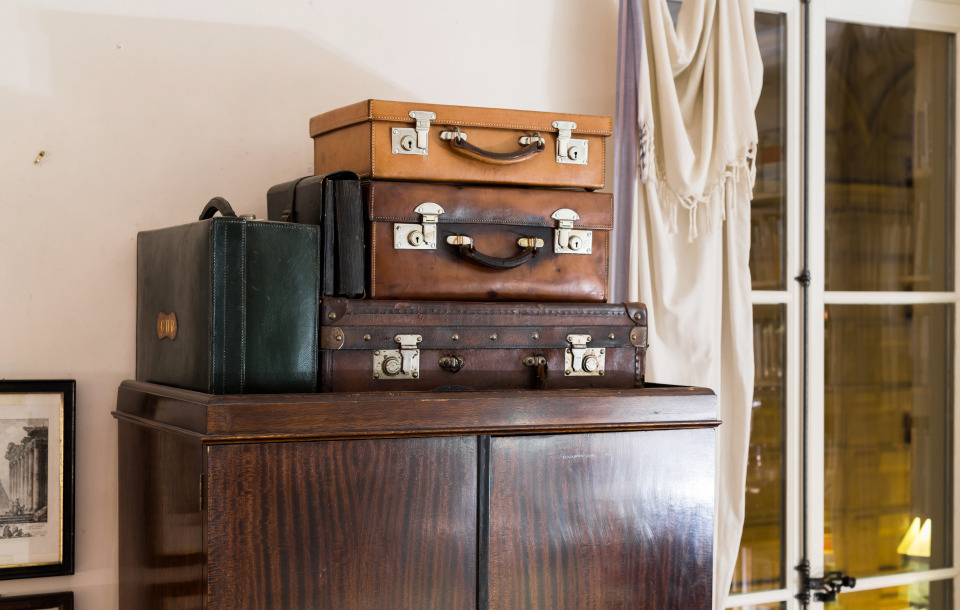 Another antique finding is a large leather trunk where the owners store their clothes.

There is no wardrobe room in the apartment, that’s why it is a quite useful item.

The owners sorted out in suitcases all things for which there was no room in the trunk.

Perhaps, it is not the best solution but one can get ready for a short trip for a week-end quickly. 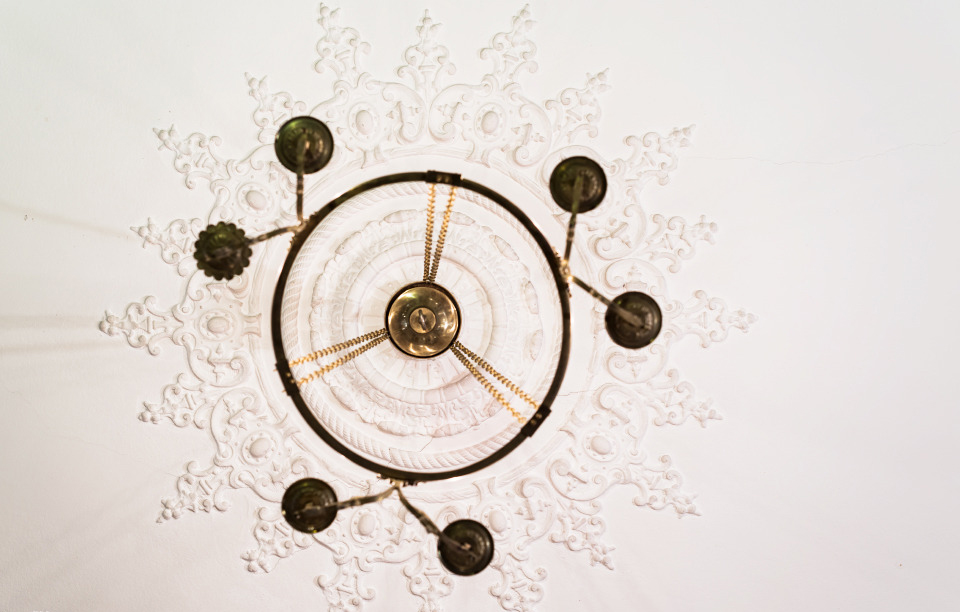 A lamp is a link of all space, it was found on a legendary Paris jumble market Klinyankur.

The owners replaced a cheap wiring with candles, that’s why they did not connect a massive lamp to electricity and they simply hung it in the center of gypsum ceiling dressing.

Candle twinkling reflects in both mirrors and creates a magic atmosphere. 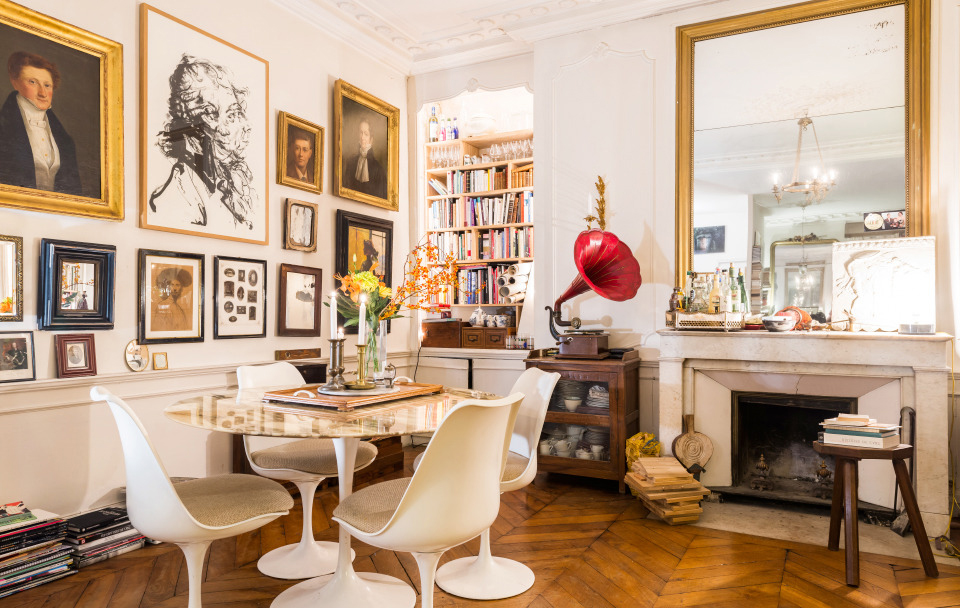