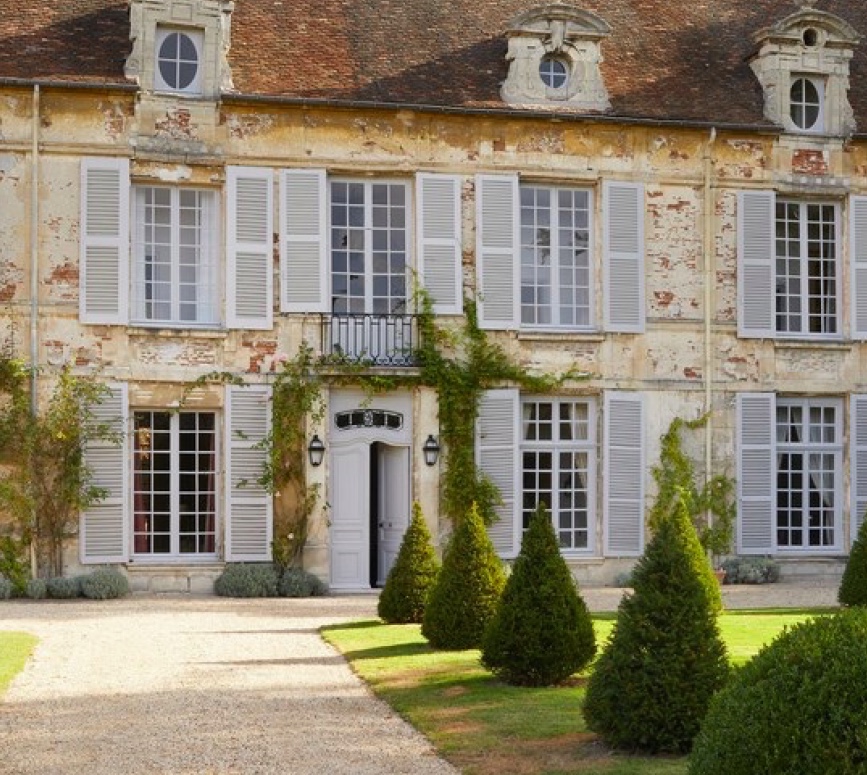 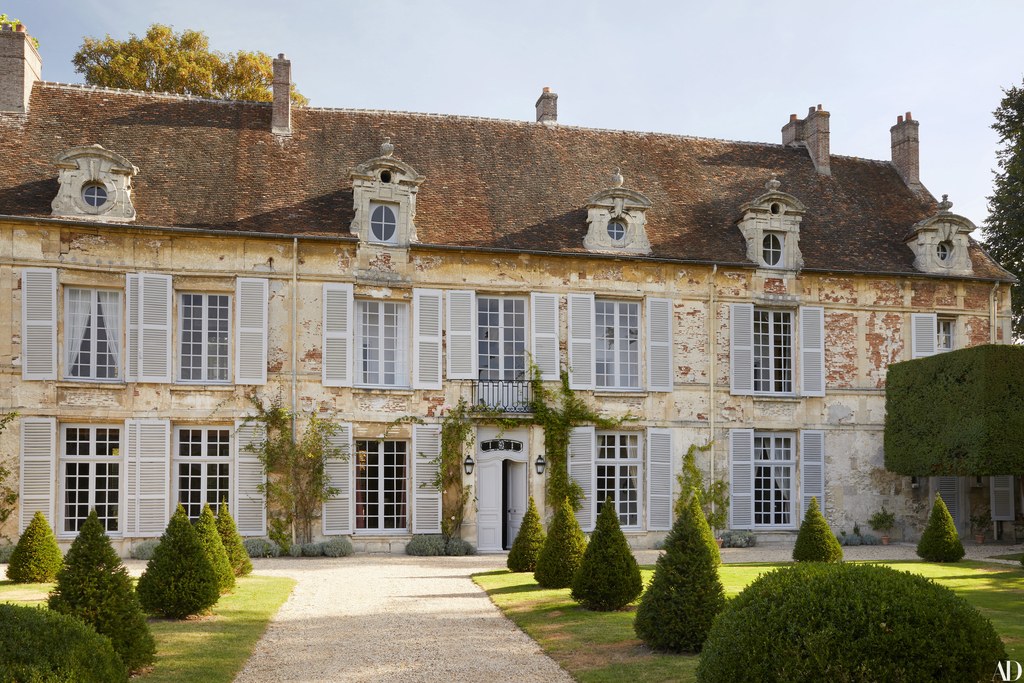 American entrepreneur Chris Burch had long dreamed of having an apartment in Paris. He knew the precise floor plan he would inhabit in the exact building on rue de Seine. The problem was that no such place was available.

“In France, if you want a beautiful apartment with a garden in the best neighborhood, you need to be patient,” says Burch’s friend Marco Scaroni, who, with his partner, Jamie Creel—purveyor behind the beloved Manhattan curiosity shop Creel and Gow—possesses such a unicorn dwelling. 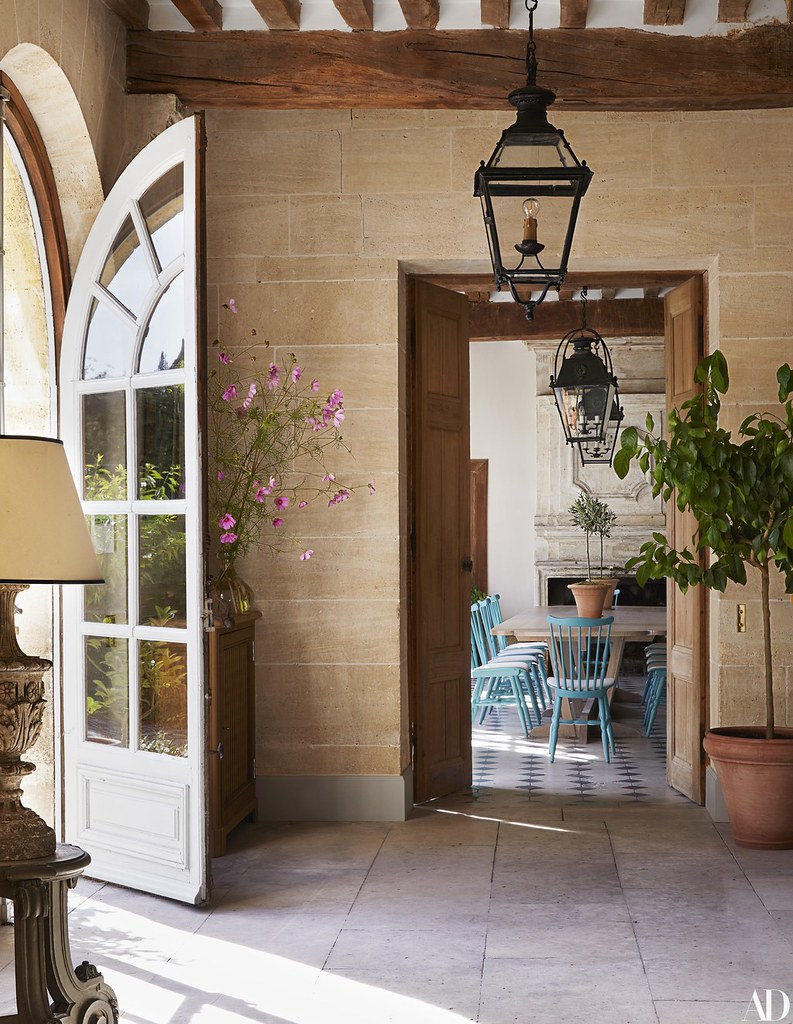 A few years ago, while Burch was visiting the couple in Paris, the three men took a day trip to Senlis, a cobblestoned village outside the city. Scarani and Creel had always been tickled by the idea of having their own pile there, and having been told by a friend that a majestic 1608 hôtel particulier was for sale, they went to see the place with Burch in tow. 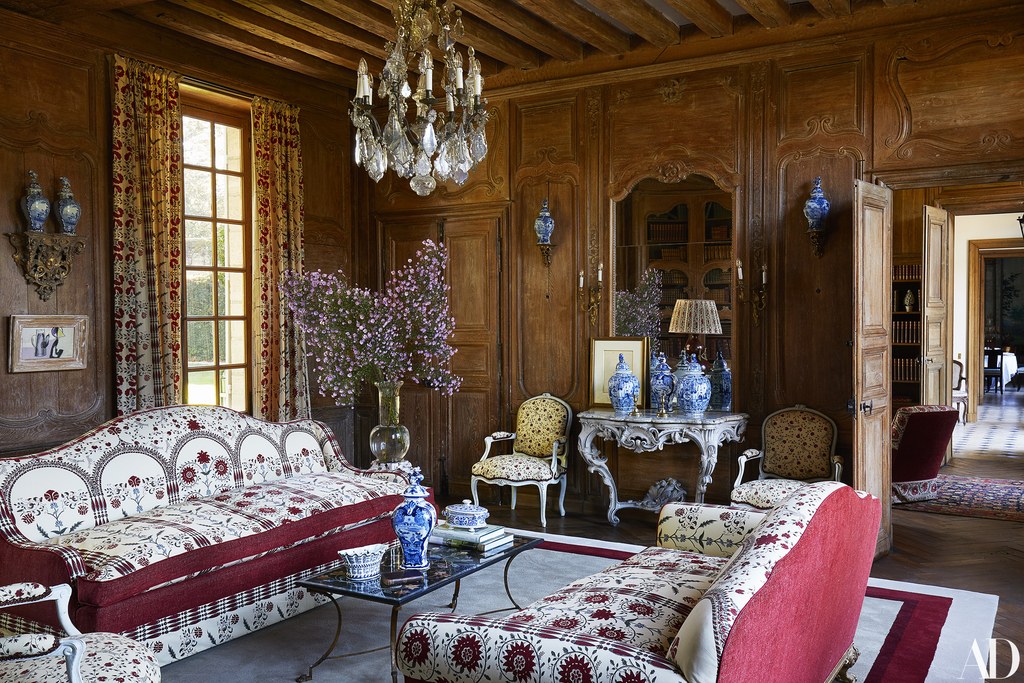 “It was absolutely stunning,” says Scarani, “but it was too big for us and too much work.” Burch, on the other hand, was sold. “It needed renovation; it needed everything,” he concedes. “But you could just feel it was wonderful.”

As the father of six children, Burch hoped the home could one day serve as a family respite. Says Scarani, reflecting on what admittedly began as an impulse buy: “Chris is very spontaneous. It’s part of his secret to success.” 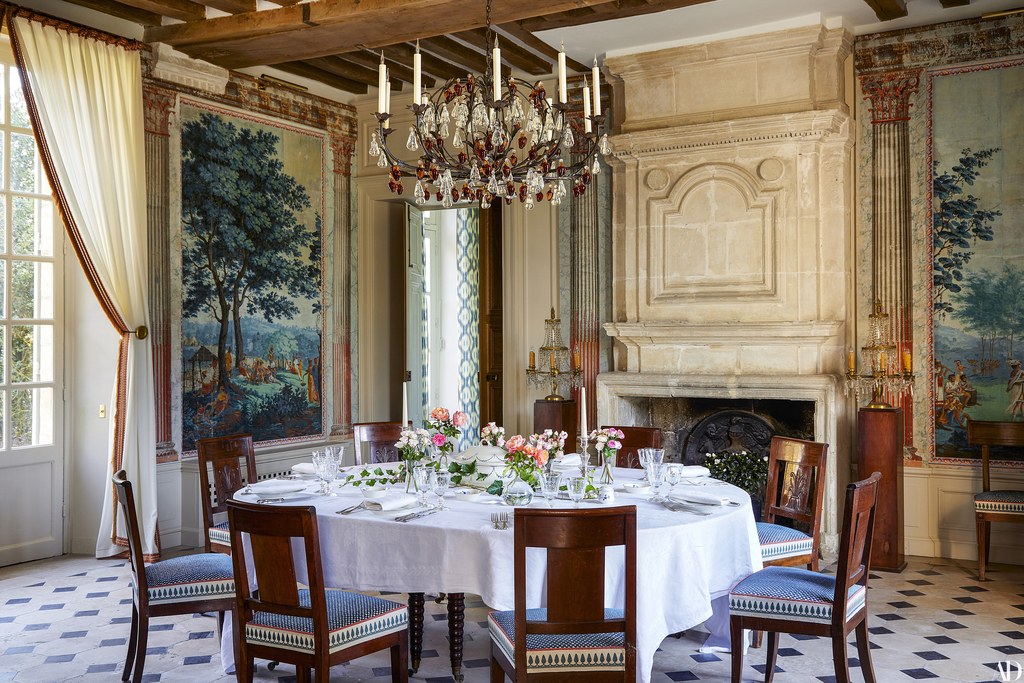 The 10,000-square-foot house has the rare distinction of being landmarked on both the exterior and much of the interior. As such, it still possessed many of its 17th- and 18th-century floors, paneling, and beams.

Yet it had also undergone patchy renovations over time. “We wanted to bring it right back to the way it had been,” notes Burch. 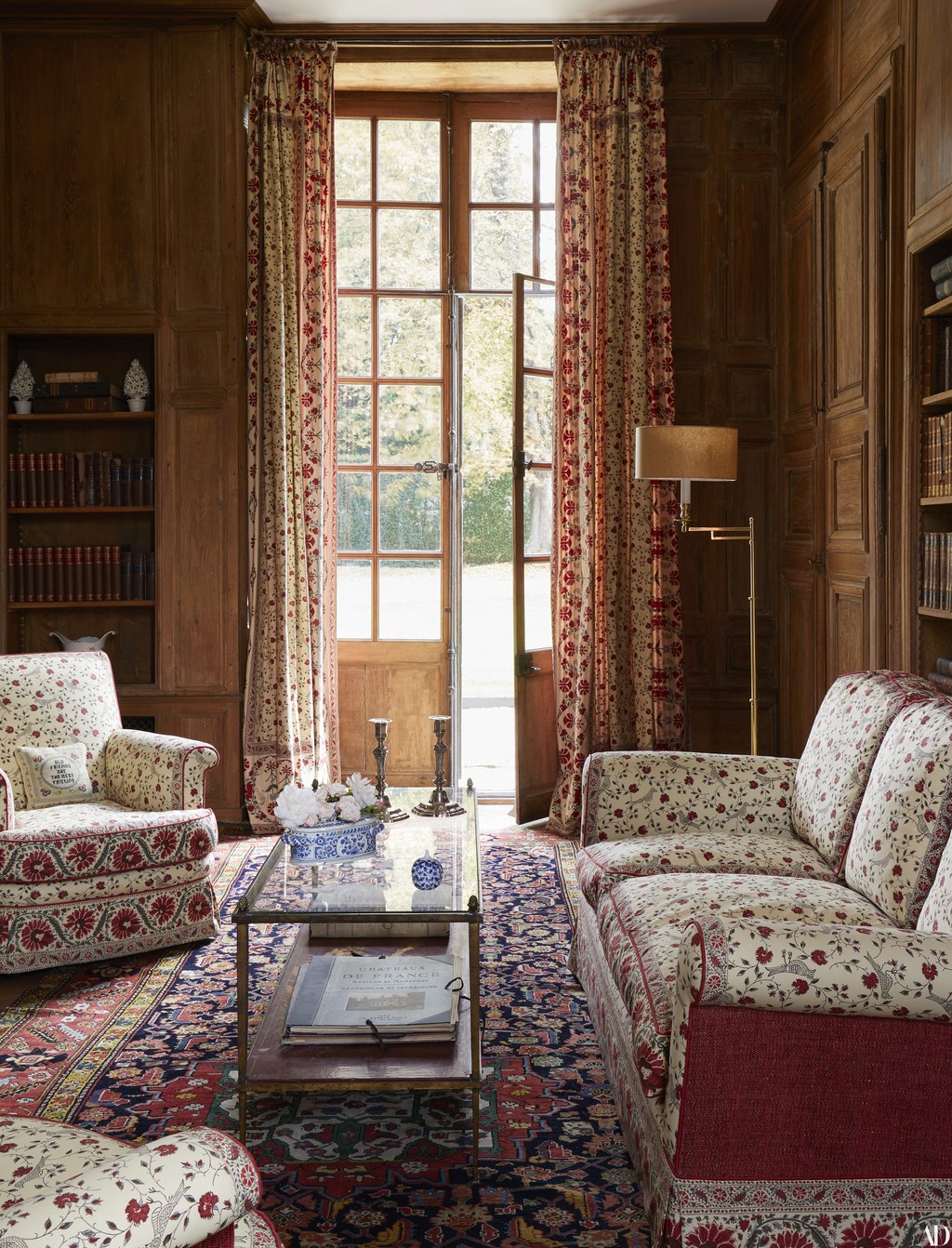 Scarani had spent three years tending to the interiors of Nihi, Burch’s luxury surf resort in Indonesia, and beyond that has conjured up his own sublime homes.

“I never would have bought the house unless I knew he was there,” Burch admits. Scarani, who doesn’t consider himself an interior designer, describes his role as that of “creative director—I source and put the concept together.” 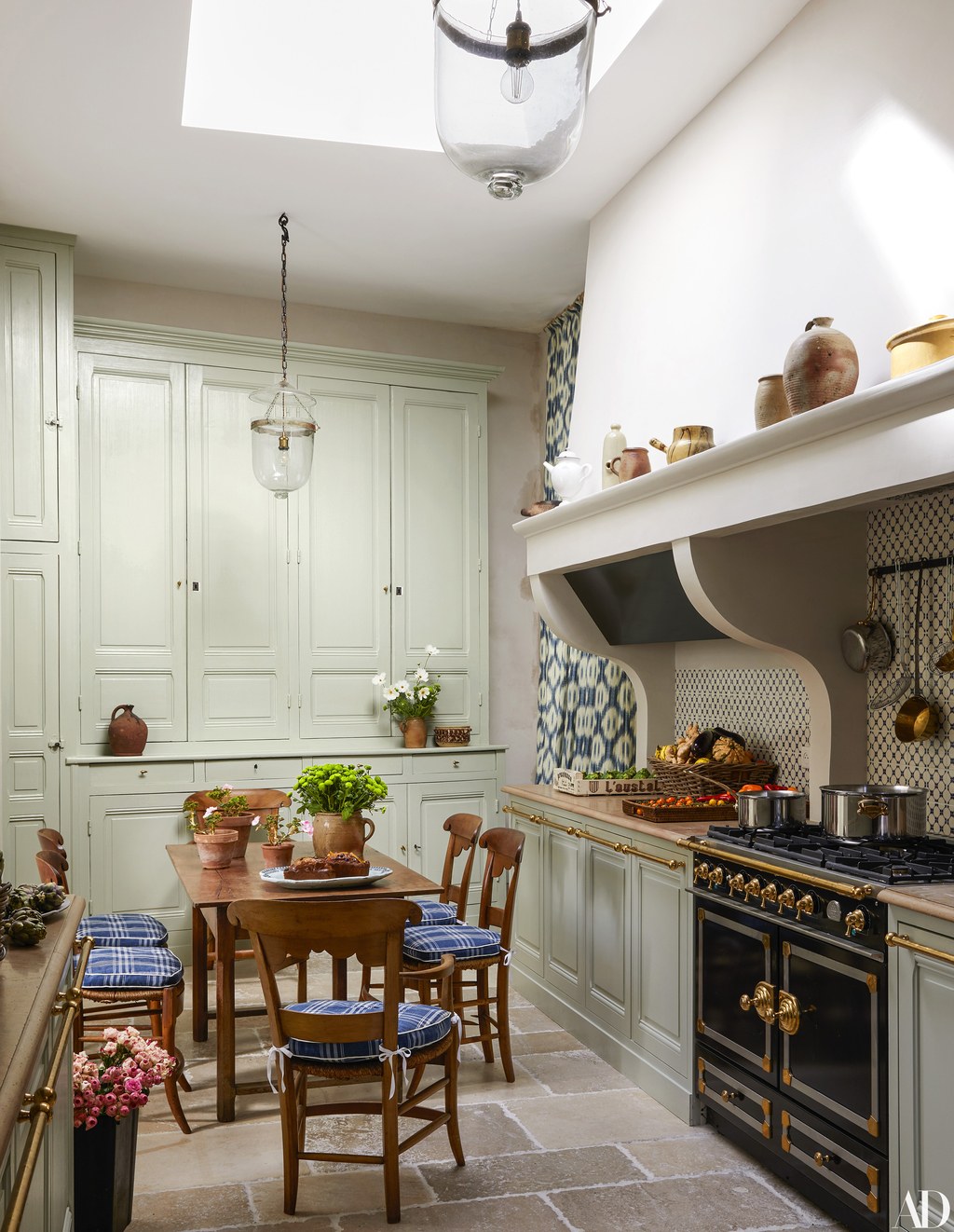 To that end, he immediately reached out to French architect and decorator Michel Pinet, something of a national treasure for his masterly work restoring several of the country’s most prized monuments historiques, Château de Versailles among them.

He is also a specialist in the field of antique wallpapers and fabrics, many of which he and Scarani used to outfit Burch’s Senlis abode. 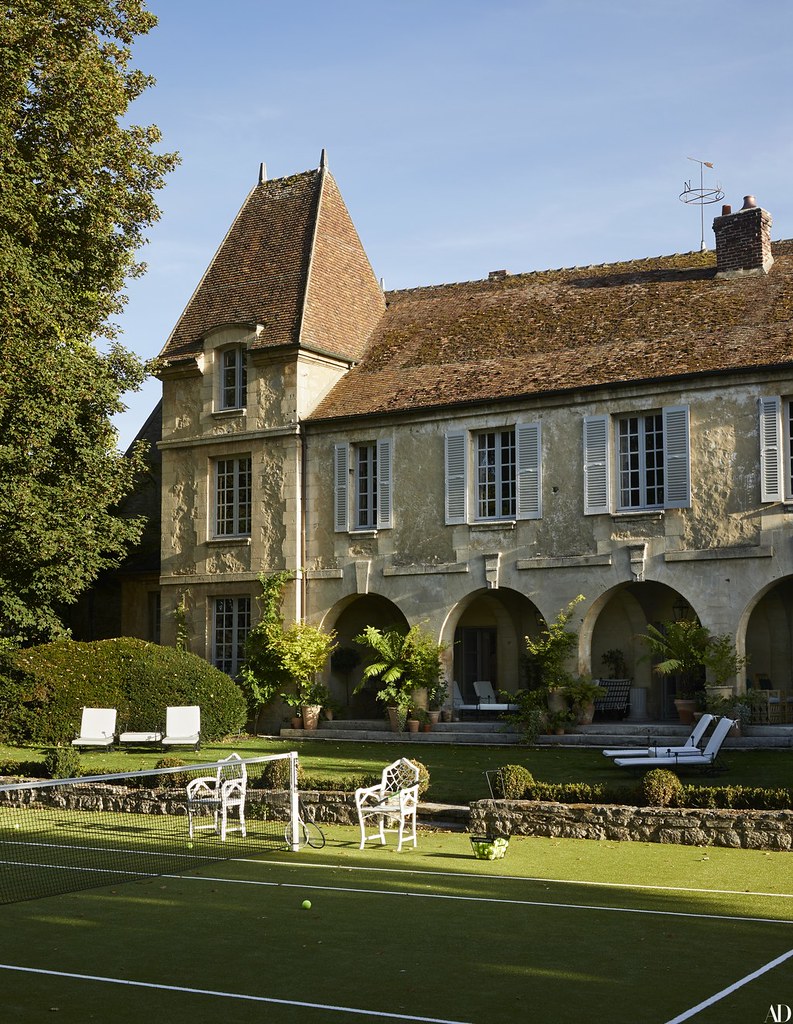 The most historically significant papier peint, though, had been secured before Pinet came onto the scene: a complete set of Joseph Dufour’s 1805 scenic panoramic depicting the voyages of Captain Cook, which Scarani spotted in a Christie’s catalogue.

Burch, he says, “bought them for nothing.” Stunned by the acquisition, Pinet redesigned the original moldings and columns in the formal dining room to perfectly frame the panels. 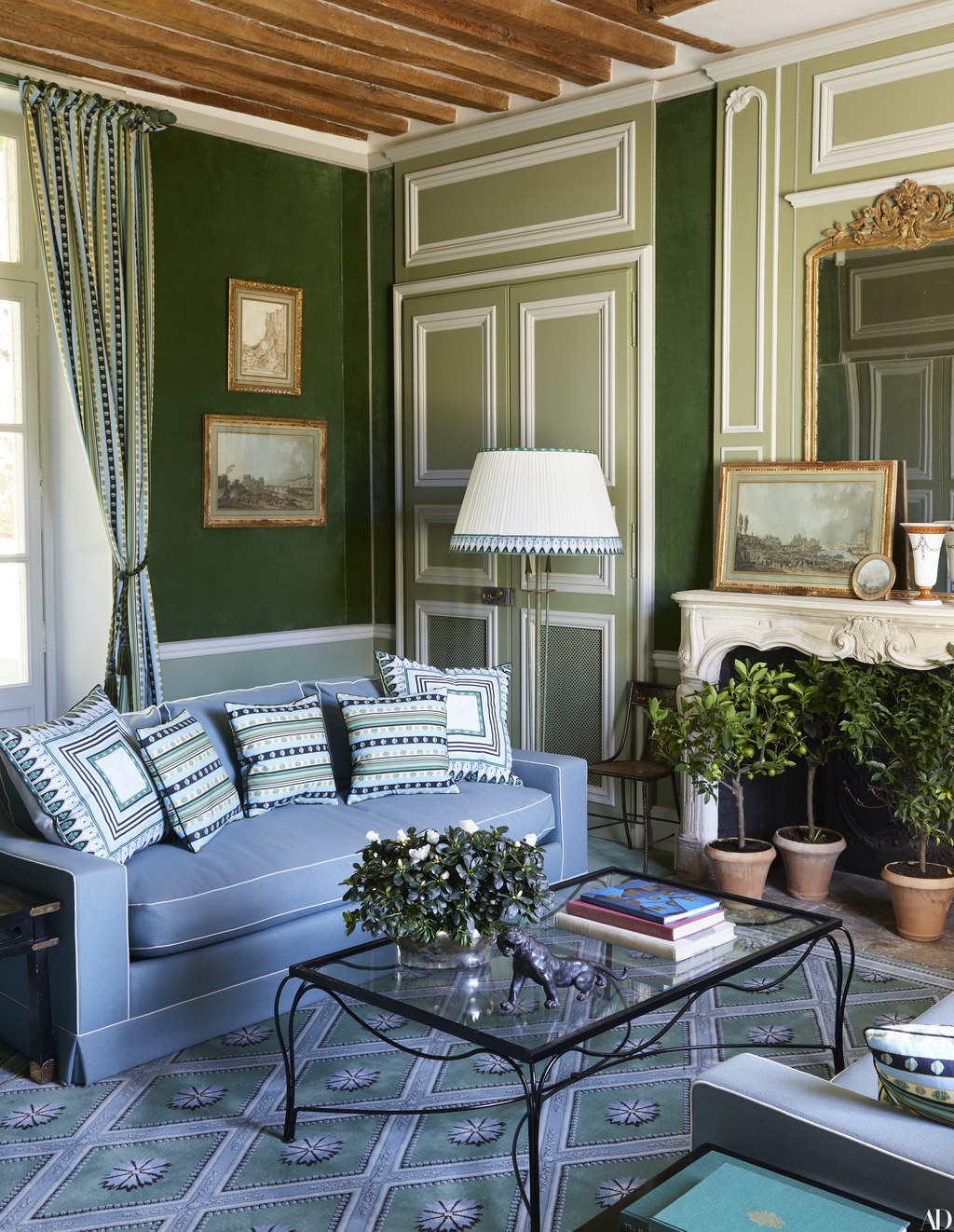 Maintaining the feeling of a historic home while instilling it with all the functionality of a new one was the duo’s modus operandi.

Four exquisite hand-carved doors dating back to the 1600s that had been randomly dispersed throughout the house have been reunited in a guest bedroom. 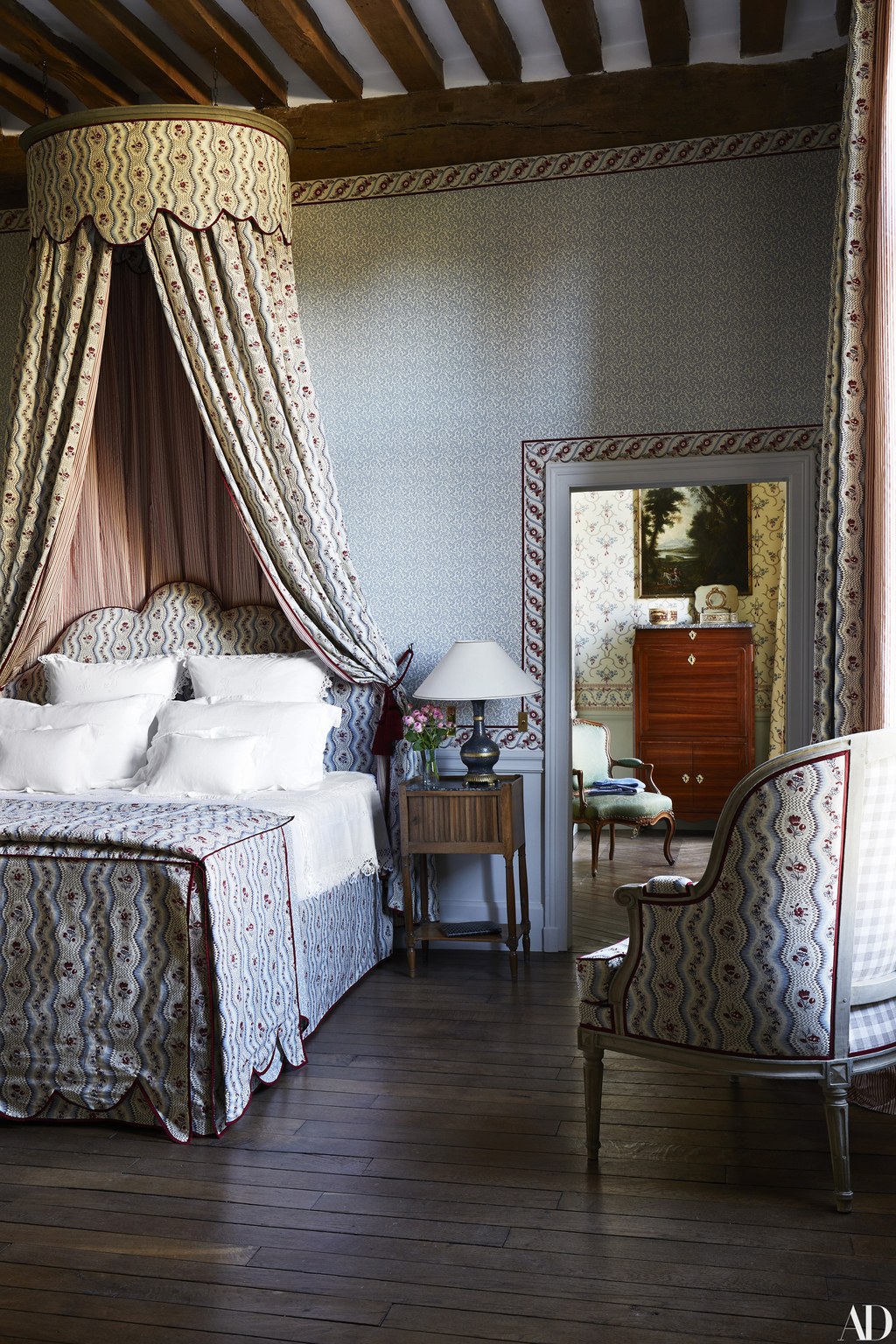 The nine bathrooms and two kitchens, which had undergone “horrible” renovations in the 1950s and ’70s, were reimagined as they might have existed 300 years ago, save for brand-new plumbing.

In the main kitchen (which, Burch admits, “I haven’t stepped foot in”), Scarani and Pinet reproduced antique tiles and sourced ancient stone.

The fabric cushioning the rustic chairs is an antique Braquenié check dating to the 1700s; Pinet had just enough in his archive to cover the eight seats. 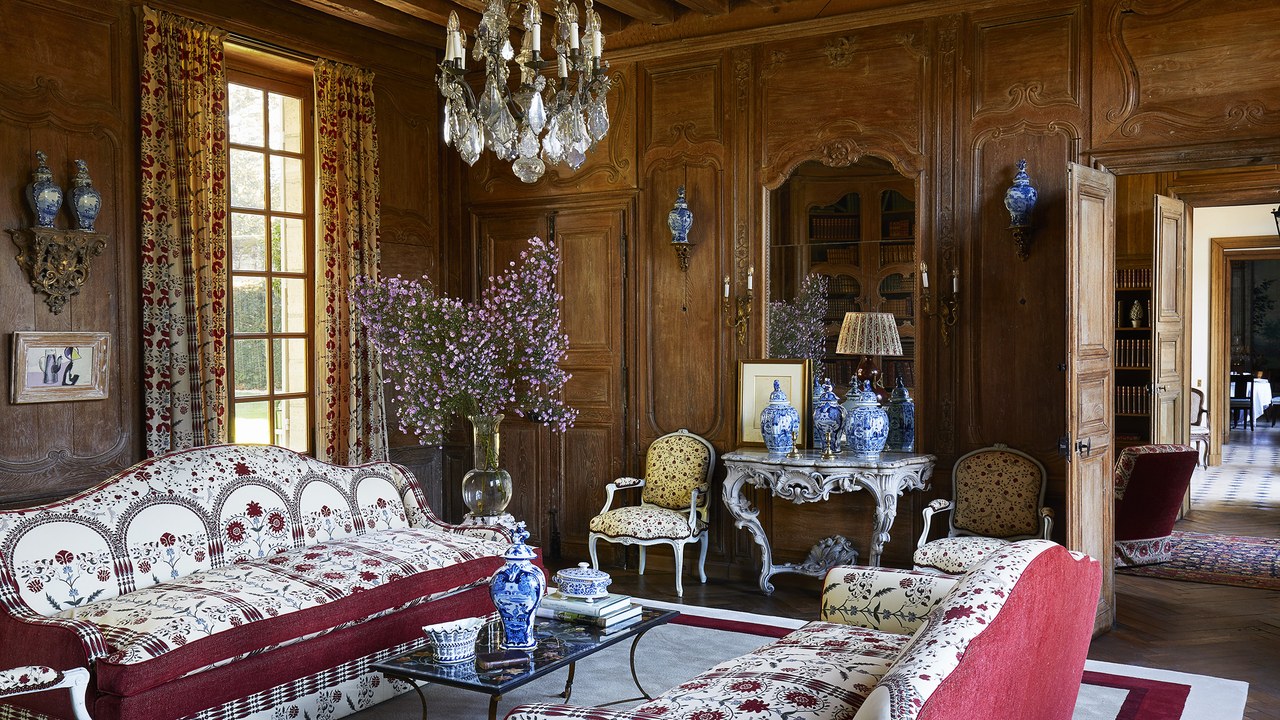 To say that everything has been executed with scrupulous accuracy would be an understatement. Yet the atmosphere is relaxed.

“It’s definitely not precious,” Burch says. “That’s one thing I don’t like at all.” Scarani was of the same mind-set. “Usually French is formal and uncomfortable,” he observes. “I said to Chris, ‘You want a home that looks like it’s been there forever, like you’ve lived in it.’ ” 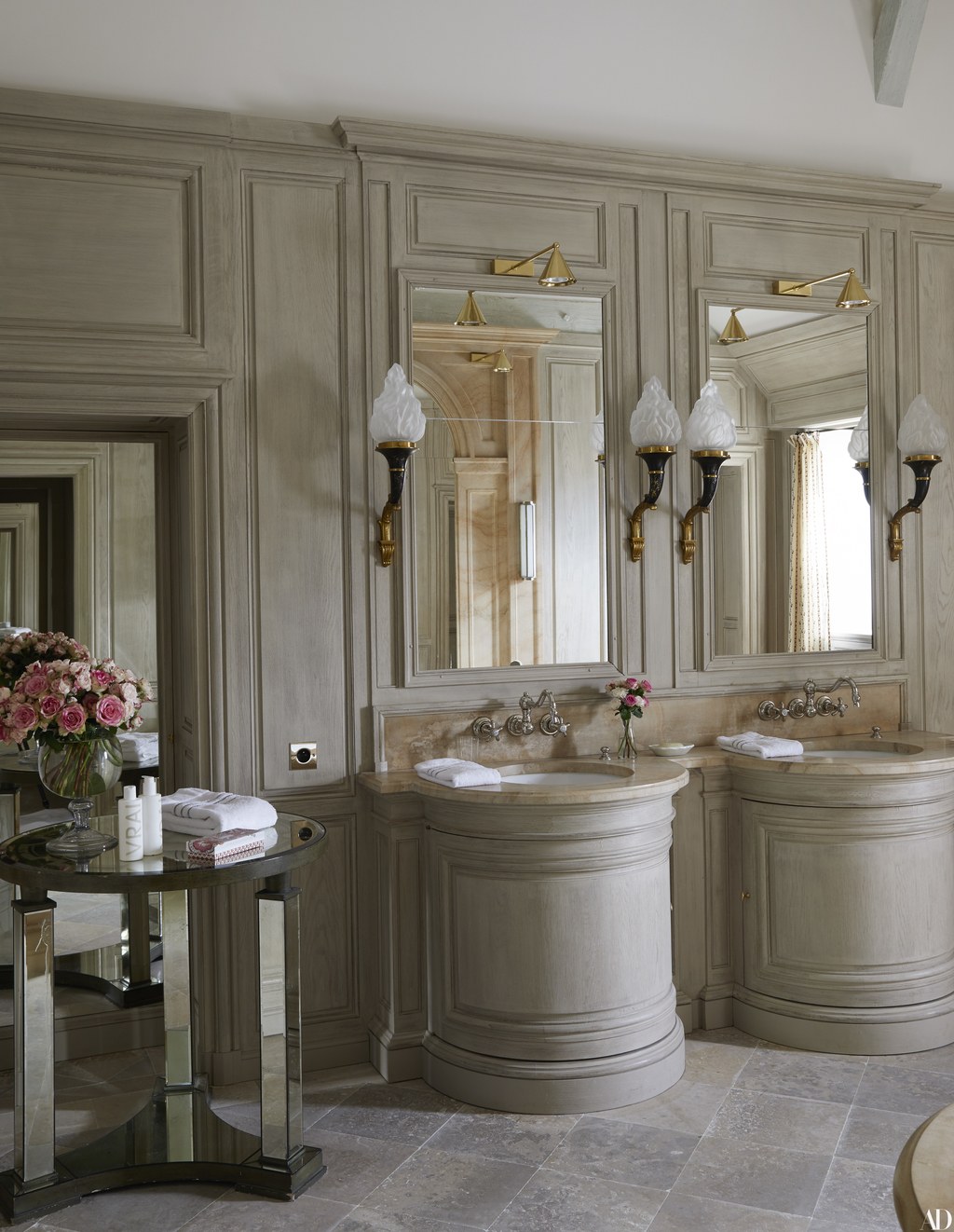 Burch leans toward the cozy English country look, which is expressed in furnishings you can sink into, though here, there’s not a chintz in sight. French textiles seulement.

“There are no flowers,” Scarani emphasizes. “Chris is a man. That’s why in his bedroom we used the Tree of Life, which can be feminine or masculine.” 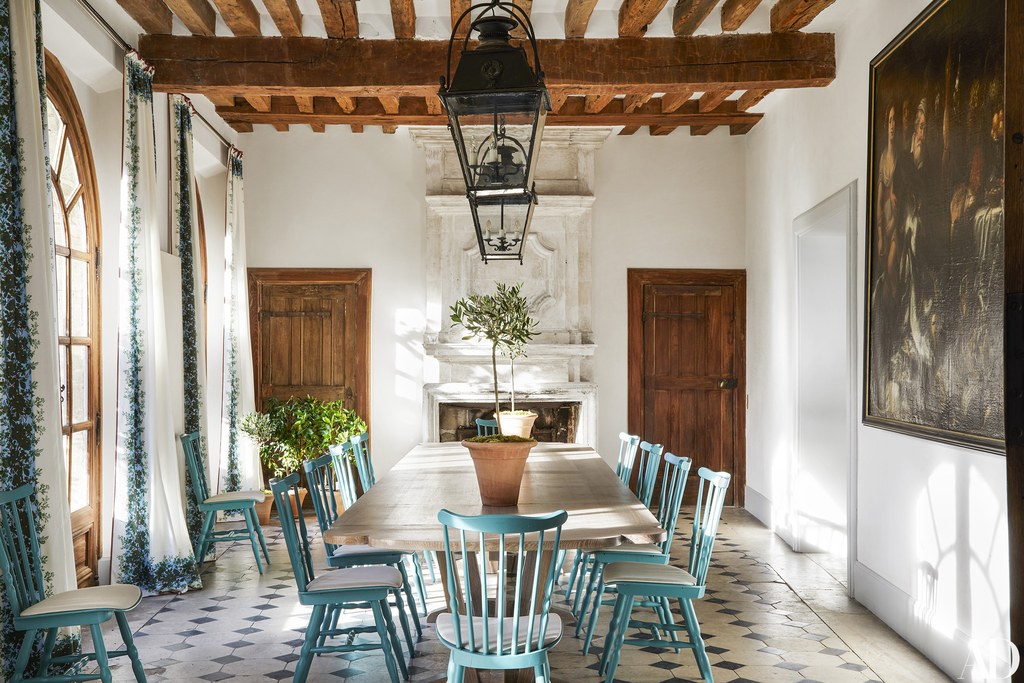 Still, liberties were taken, as with the curtains of a Madeleine Castaing climbing-vine pattern that frame the breakfast room’s windows. “They’re 19th century,” Scarani says, “but so iconic of a French interior.”

They’re also a nod to Burch’s daughter Louisa, a classicist with a soft spot for the late grande dame of design.

The businessman relays that the house has become a beloved gathering place for his three daughters. “My sons [by former wife Tory Burch] fell in love with the surf resort, so now I have something for my girls.” 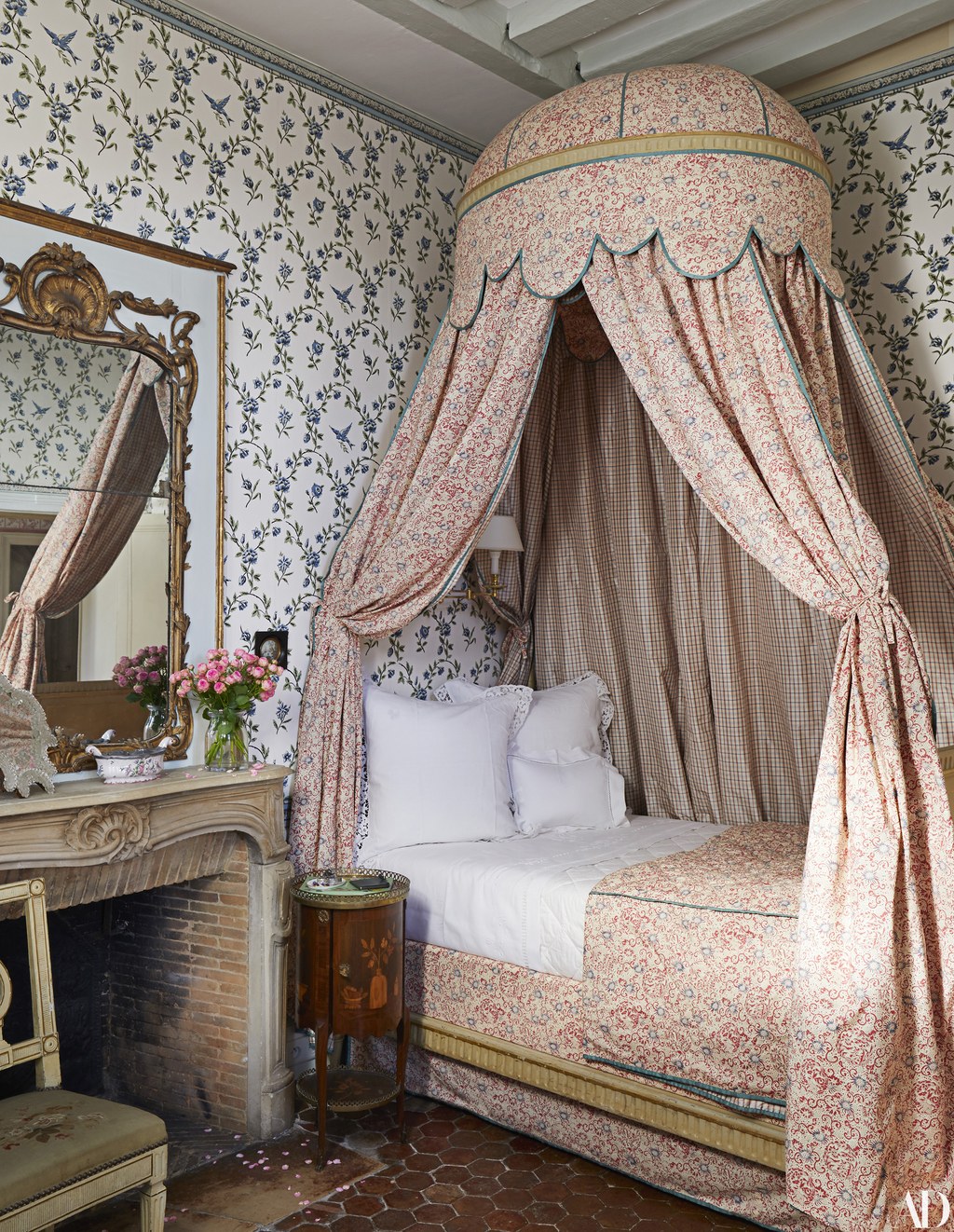 Days unfold in a leisurely fashion. Jet lag means visitors often don’t roll out of bed before noon. Some head into the village to visit museums or shop, while others play tennis or curl up with a book.

Cocktails are served on the loggia, furnished with a mix of iron from France and rattan from Tangier, where Scarani and Creel have a home. 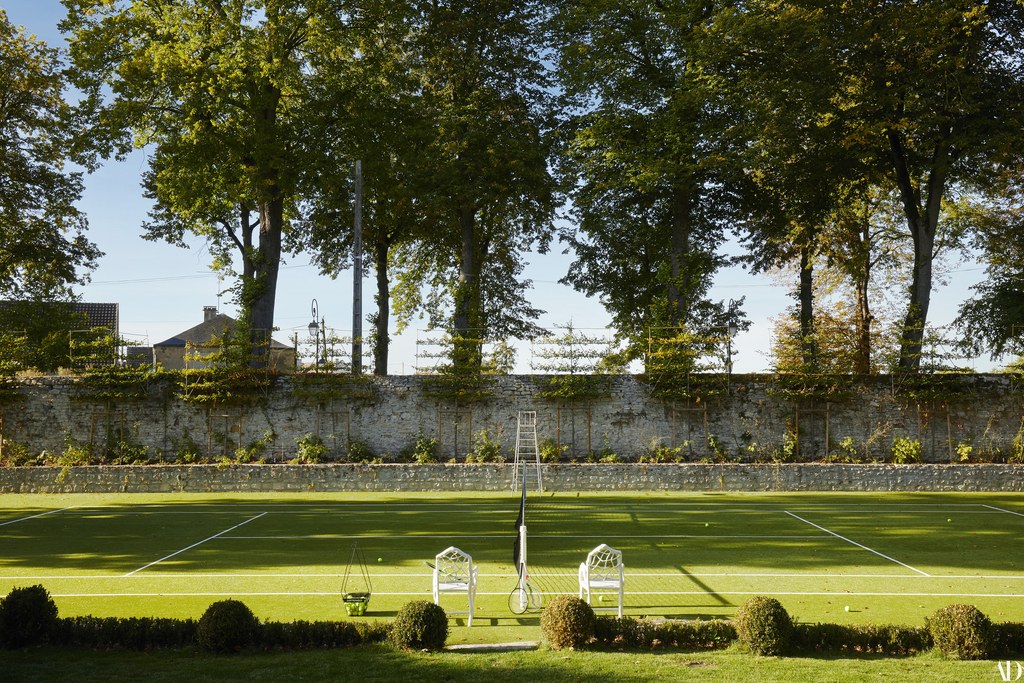 There’s a vegetable patch, pear and apple orchards, chickens, and even a rabbit. “As I’ve gotten older, I’ve gone from loving the ocean to loving the earth,” Burch says, adding that at Senlis, “I wanted to really make an effort to do things the way they were done a long time ago.” 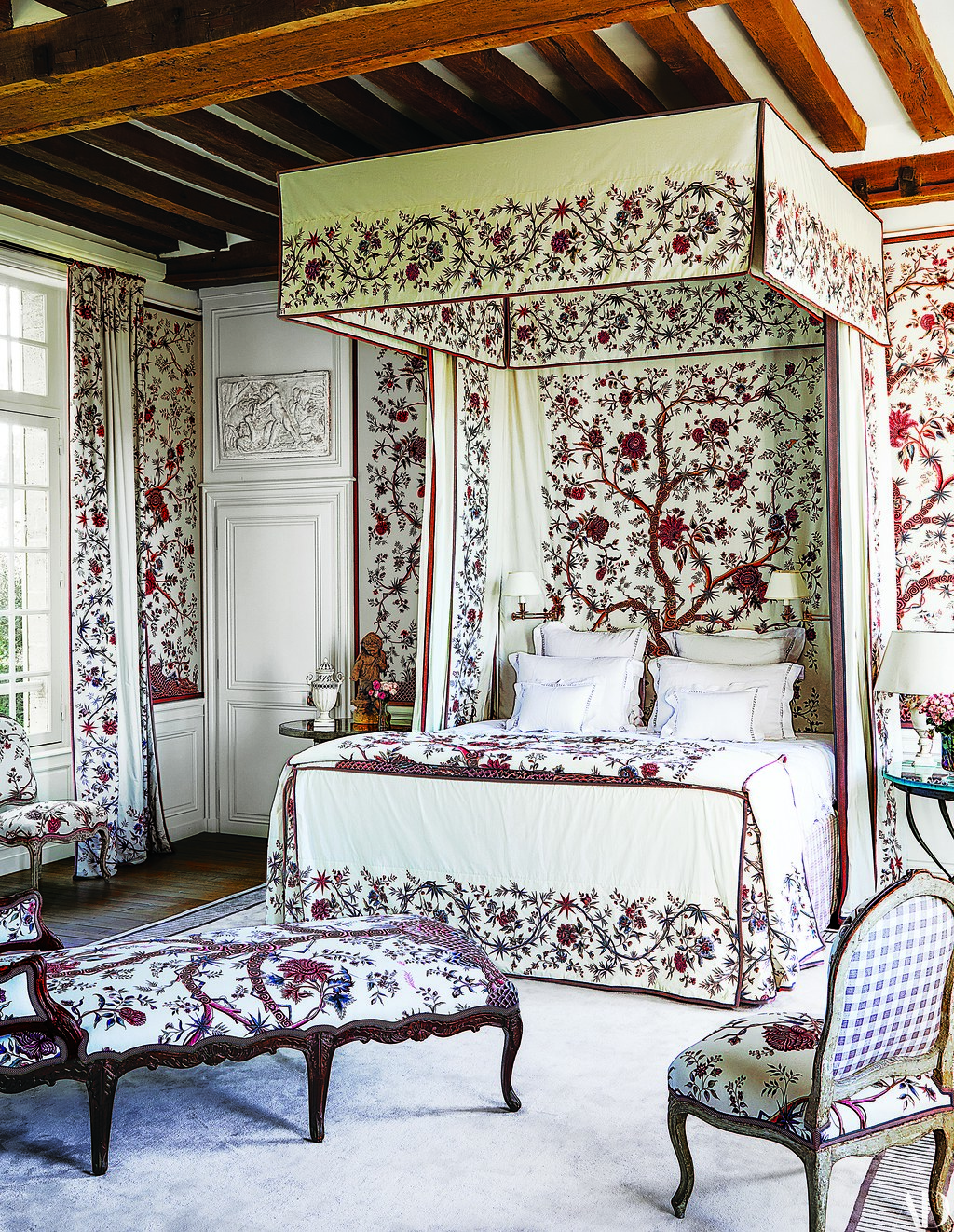 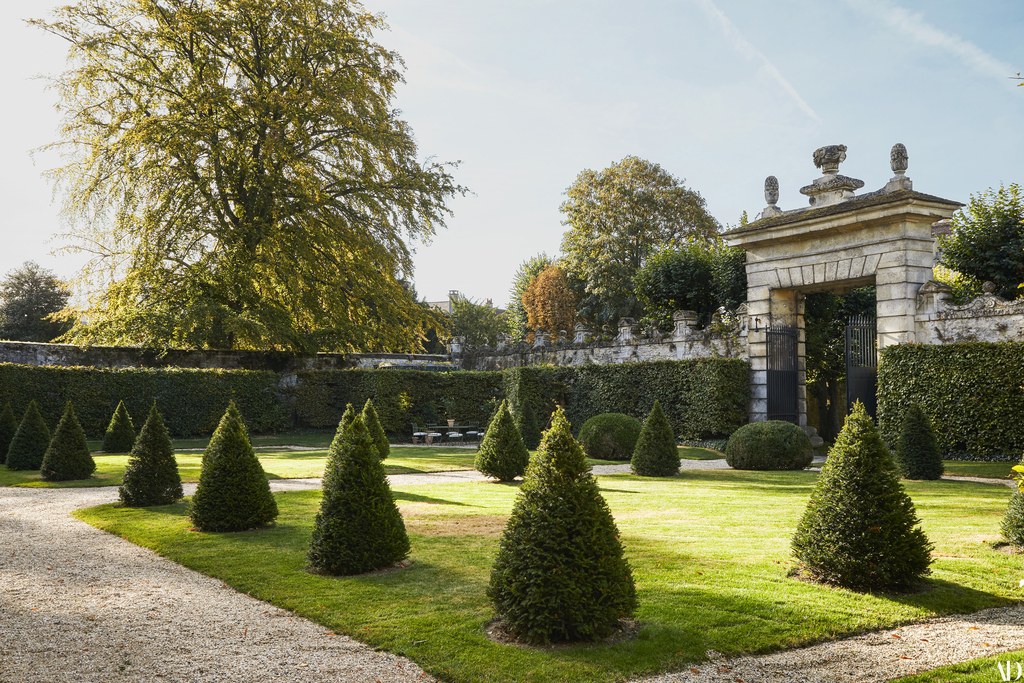